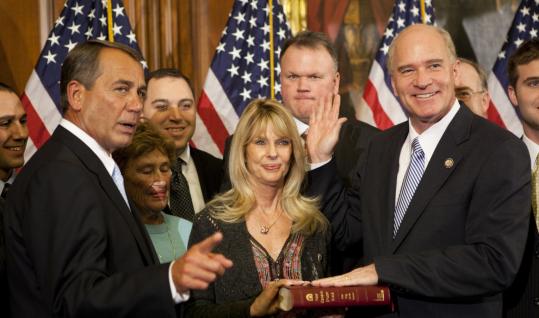 WASHINGTON — New Hampshire Republican Frank Guinta shuffled his 6-year-old son, Jack, from one knee to the other yesterday as he waited to fulfill his first duty as a new member of the House: to vote for Ohio Republican John Boehner as speaker.

Across the aisle, freshman William R. Keating of Massachusetts, one of nine new Democrats, joined the House in a political party stripped of its majority power — part of the smallest class of freshman representatives from either party on Capitol Hill since 1915.

These two New England politicians — Guinta a Tea Party movement favorite, Keating on the opposite side of the political spectrum — were sworn in yesterday, bringing with them competing agendas that will test whatever lingering spirit of bipartisanship remains from last year’s lame-duck session. Whether they and their parties can find common ground could determine whether the new Congress accomplishes much or merely grinds away for two years.

“People have high expectations for this Congress,’’ said Guinta, who ousted an incumbent Democrat to win his seat. “People have great optimism that we will restore the principles of more limited, effective government to focus on economy and job growth and to address deficits and long-term debt. I think this class understands the responsibility it has.’’

But Keating, who defied the nationwide GOP wave in November to win the seat vacated by retired Representative William D. Delahunt, vowed to fight on as part of the minority.

“I think if you go with an attitude that ‘Oh, I’m in the minority, I won’t have a position, it’s fruitless to do this,’ that’s giving up,’’ Keating said.

The swearing-in closed the book on the Democratic Party’s four-year hold on both chambers of Congress, and begins an era of divided government. After a landslide win in the November elections, Republicans now hold a 242-to-193 majority in the House. Senate Democrats maintained their hold on their chamber, but their advantage has been whittled to 53 to 47.

While yesterday’s events focused mostly on the grandeur of the transfer of the speakership from Democrat Nancy Pelosi to Boehner, the arrival of freshly seated backbenchers is also one of Washington’s great traditions. A member’s swearing-in is invariably followed by vows to remember the people who sent them here and lessons about what one US representative can actually accomplish.

For Guinta, it was a day of celebration amid a newly empowered party. With his son and daughter, Colby, 7, at his side, Guinta took the oath of office as part of the largest class of Republican freshmen in nearly a century. Members of that class say the Congress is under orders from the public to cut federal budgets, repeal the president’s health care law, and reform Washington.

Guinta, 40, defeated Democrat Carol Shea-Porter in November’s election, becoming one of New England’s most prominent Tea Party-backed members of Congress. He is considered more conservative than Senator Scott Brown, the Massachusetts Republican elected in a special election a year ago with Tea Party movement help. During the campaign, Guinta issued a list of potential budget cuts that includes eliminating the federal departments of energy and education. Those suggestion are “just something to look at,’’ said Guinta’s office, under his philosophy that everything must be on the table for cuts.

Guinta brought few mementos on the 10 1/2-hour drive to Washington from New Hampshire Sunday, beyond family photos and a drawing of Manchester City Hall, where he served as mayor from 2006 to 2010.

Guinta supports much of the Tea Party movement agenda, including the repeal of health care legislation. A repeal measure may pass in the House but is seen as having little chance in the Senate. Guinta said he “would hope that the Senate would see that November’s election sent a strong, clear message’’ that the country opposed the law.

Keating, 58, who gave up his post as Norfolk district attorney to run for Congress, sees the health care issue very differently. A repeal vote, he said, would be a waste of time because the Senate won’t go along. Keating is taking a wait-and-see approach to health care, saying he doesn’t think it should be repealed but is open to revisions.

Keating is also realistic about his lack of power as one of the lowest-ranking members of the minority. Party leaders already have told him he won’t be getting any plum committee assignments.

Keating’s wife and two college-age children, Kristen and Patrick, joined hundreds of supporters crammed into his new office on Capitol Hill yesterday, nibbling on pastries, sipping coffee, waiting for a chance to shake his hand and perhaps snap a photo with the new congressman.

Keating said he plans to request a hearing on aviation security after a North Carolina teenager was killed last year in a fall from the wheel well of a Boston-bound commercial plane. Keating also is interested in federal policies and programs that help drug addicts and their families, and he said he plans to focus on constituent services. He said a top priority will be creating jobs.

In the meantime, he has been networking with House members, trying to find common interests, even across the aisle. He has sought out representatives who are former prosecutors, and others who have homes or who have vacationed on Cape Cod.

Keating did get his first choice of office spaces, a three-room suite in the Cannon House Office Building that he said was the first office of John F. Kennedy when he was elected in 1946. On day one of his congressional career, he was the proverbial freshman, in awe of the history of the Capitol complex where he now works.

“You walk around the whole building and you see the people that formed this country,’’ he said. “That kind of thing is all of a sudden a speed bump for your brain. You say, ‘Oh my God.’ ’’

Mark Arsenault can be reached at marsenault@globe.com; Donovan Slack at dslack@globe.com.