Massachusetts will lose one of its 10 US House seats in 2012 following the US Census Bureau’s reapportionment of congressional districts, which reflects the continued migration of people and political power to the nation’s South and West.

The Census Bureau’s 2010 population figures, released yesterday, show that the nation grew by 9.7 percent over the past decade, but that Massachusetts’ population increased by only 3.1 percent, a modest rate compared with fast-growing states such as Texas, Nevada, and Florida.

The updated population count not only further erodes Massachusetts’ clout on Capitol Hill, but also promises to diminish the state’s share of federal funding and its stake in presidential elections, in which Electoral College votes are based on the size of a state’s congressional delegation. Early last century, Massachusetts had 16 House districts.

Nationally, Texas will pick up four seats and Florida two. New York and Ohio will each lose two seats, and Michigan will lose one.

Overall, the United States now has 309 million people, with the West making particular gains. For the first time, Census officials said, the West is more populous than the Midwest.

In political terms, the continued population shift from the Northeast to GOP-dominated states in the South, Southwest, and West gives a boost to Republicans, who won control of the House just last month, and it could make it more difficult for Democrats to win national elections.

However, if Hispanics, who have voted Democratic, make up large swaths of new House districts, that could temper Republican gains.

In Massachusetts, the release of the Census figures sets the stage for a yearlong political struggle in which members of the state’s congressional delegation will jockey to preserve their seats and win favorable new district boundaries. At the center of it will be Beacon Hill legislative leaders and Governor Deval Patrick, who are charged with creating the new map.

With public interest groups and some public officials saying political interference should be kept to a minimum, Patrick said yesterday he would work to ensure the redistricting process is objective and transparent.

“My role in it is to make sure the plan is fair and open and produces a result that we can be confident in,’’ Patrick said at press conference. “It’s a political process, right? So there is some give-and-take. But there are rules. There are constitutional rules.’’

Still, in a state that coined the word gerrymandering when its political leaders created a contorted congressional district in the 19th century, the redistricting debate will inevitably come down to a series of political power plays, many of which will take place behind closed doors. Those battles have, over the years, resulted in serpentine districts — including one that runs from Nantucket to the Boston city limits and another that includes both New Bedford and Brookline.

“There is a lot of raw politics here,’’ said the House Republican leader, Bradley H. Jones Jr., asserting that lawmakers will draw the maps with their own political futures in mind. “To deny that is not involved is naive.’’

It is not clear whether any current members of the Massachusetts House delegation, all Democrats, will be forced to face each other in the 2012 primaries. If one or more incumbents run for another office or decide not to seek another term, the negotiations between the delegation and Beacon Hill will be made easier.

Some observers predict, for example, that US Representative Barney Frank, a Newton Democrat first elected in 1980, will not seek reelection in 2012.

Other members, including Michael E. Capuano of Somerville, Stephen F. Lynch of South Boston, and Edward J. Markey of Malden, could be potential candidates to take on Senator Scott Brown, a Republican who is up for reelection in two years.

But, even if one or two seats were to open up, the Democrats who hold the state’s two western districts, US Representatives Richard E. Neal of Springfield and John W. Olver of Amherst, may still be forced into one district; alternatively, their districts would probably have to be extended east, which would force further changes for their colleagues.

James T. Brett, president of the New England Council, a group that advocates for the region’s interests in Washington, said the loss of a seat, while initially appearing to be a major setback, can be offset by what he said is the strength and influence of the current Massachusetts delegation.

“When you lose a seat, you lose political clout, obviously,’’ said Brett, a former Boston state representative who cochaired the 1991 redistricting committee. “But I think it can be made up with the existing team we have in place. They are experienced, politically savvy players who are well-respected on both sides of the aisle.’’

Secretary of State William F. Galvin, who has called for a special, independent commission to advise the Legislature on redistricting, said the loss of a seat highlights the need for a thoughtful process in creating sensibly drawn boundaries. The state Republican Party — which, lacking veto power in the Legislature, will have little say over redistricting — echoed Galvin’s call yesterday.

State Senator Stanley C. Rosenberg, Senate chairman of the legislative redistricting committee, said he would like the panel to finish the mapping process by the end of next year, a month or two before nomination papers are available to candidates for the 2012 elections.

The committee will not only draw congressional boundaries, but will also devise new districts for state representatives, state senators, and the eight members of the Governor’s Council.

Rosenberg, an Amherst Democrat who cochaired the redistricting panel 10 years ago, said the task is arduous and often contentious, but he predicted that reason will prevail. “There is always politics and political fights, but we will see how it plays out,’’ he said.

Nationally, the reapportionment will affect presidential and congressional elections for the next decade, potentially to the benefit of Republicans.

In the state legislatures, which will draw the new congressional districts in most states, Republicans control both chambers in 10 of the 18 states that will lose or gain seats in the US House; Democrats control the legislatures in five of the states, and three are divided.

Because each congressional seat represents a vote in the Electoral College, the changes could also benefit the GOP in the next three presidential elections.

Seven states that have voted Republican in the last three presidential elections will have a net gain of six seats in Congress, while the seven that have gone Democratic will suffer a net loss of six seats.

The battleground states of Ohio, Michigan, and Pennsylvania, which Democrats typically need to win to capture the White House, lost a combined four seats, while Florida, which tipped the Electoral College to Republican George W. Bush in 2000 but went for Barack Obama in 2008, is now more powerful, collecting two more seats.

Frank Phillips can be reached at phillips@globe.com. Brian C. Mooney and Noah Bierman of the Globe staff contributed to this report. 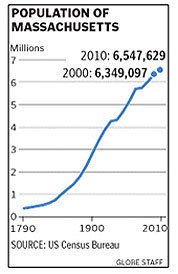