Massachusetts voters who were seeing red after Scott Brown’s victory in January were uplifted by last week’s election results. Those who were elated by the senator’s upset are now feeling blue. 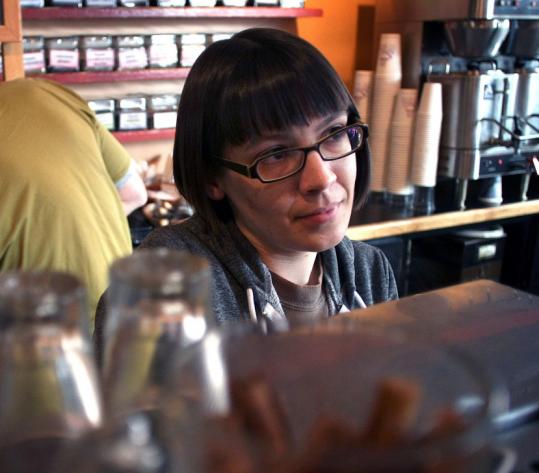 Annabel Gill, general manager of a coffee shop in Inman Square, had nothing to smile about last January. She was in a much better mood last week after voters mostly went for Democrats. ‘‘I was really relieved,’’ she said. (John Tlumacki/Globe Staff)
By David Filipov Globe Staff / November 7, 2010

CAMBRIDGE — Annabel Gill awoke the day after last week’s election to the Massachusetts she knew and loved, her confidence restored.

The Commonwealth was back in blue, and it was good.

“I was really relieved and sort of proud of Massachusetts,’’ said Gill, general manager of 1369 Coffee House in Inman Square in Cambridge, one of the state’s liberal strongholds.

About 10 miles north, outside Brother’s Deli Restaurant on Main Street in Wakefield, where Republican runner-up Charles D. Baker outpolled Governor Deval Patrick 55 percent to 37 percent, Ruth Capuci had quite a different review of what Massachusetts voters had wrought.

“A friend from New Hampshire wrote me and said ‘What is wrong with you?’ And I have no idea,’’ Capuci said. “I think we just made history, we’re so stupid.’’

It was a total reversal of the euphoria and despair triggered by Republican Scott Brown’s election to the US Senate 10 months ago. Now, that vote is beginning to look more like an aberration. Republicans who had hoped Brown’s victory meant that Massachusetts would join the anti-incumbent fervor sweeping the nation expressed disbelief that Democrats won nearly every race Tuesday. Democrats who were shocked in January by the “Scott heard ’round the world’’ were cheered that the Bay State had turned back the red tide that swept America.

Both sides found it disturbing — in different ways — that Massachusetts was so out of step with the rest of the country.

“This election makes me feel good about Massachusetts, but worse about the rest of the country,’’ said Nick Seamon, owner of The Black Sheep, a cafe-bakery in Amherst, where Governor Deval Patrick won 80 percent of the vote on Tuesday, his fourth-best showing in the state.

In January, when Amherst gave Democrat Martha Coakley 84 percent of the vote in her failed Senate campaign, Seamon had said he felt “heartbroken’’ and “isolated’’ in his own state. On Wednesday, after the US House was taken over by Republicans but kept its usual all-Democratic delegation from Massachusetts, Seamon felt a different sense of isolation.

“There are parts of the country that don’t feel connected to other parts,’’ he said. “We really don’t have much in common with them.’’

Ed Simone of Stoneham, where Baker beat Patrick 52 percent to 39 percent, said the statewide result was surprising given the unchallenged rule of Democrats throughout the recession.

Other Republican supporters were more emphatic. A liquor store owner in Saugus, where Baker outpolled Patrick 56 percent to 31 percent, uttered a stream of oaths that roughly translated as: “It is hard to believe the result given how bad everything is.’’ A man wearing the only business suit in a crowded Mattapan deli threw up his arms in disbelief and breathed in a profanity-laced whisper, “This is really bad.’’

And on Main Street in Wakefield, Nicole Hamlin, a nursing student, shielded her eyes from the sun at the entrance of Brother’s Deli Restaurant and expressed surprise that the Brown effect had not carried over.

“I really couldn’t believe it!’’ she said. “I was very confident that Charlie Baker would win.’’

In Cambridge, where Patrick posted his second-best showing in the state with 82 percent of the vote, Democratic voters said the results put Brown’s victory in perspective.

“In January, I was surprised by Scott Brown, but I thought it might be because he was a strapping and likeable candidate,’’ said Susan Hackley, managing director of the Program on Negotiation at Harvard Law School.

“Brown being elected may have been a reaction, because [Senator Edward M.] Kennedy held that seat for so long,’’ said Jerald Harscher, a composer who was walking across Brattle Square.

Gill, who in January said she was “surrounded by disappointed and upset people,’’ said that Tuesday’s election showed that “the state as a whole has a pretty good analytical ability to see what is going on and not just have a knee-jerk reaction to what is happening, which is what is going on around the country.’’

Annabel Gill, general manager of a coffee shop in Inman Square, had nothing to smile about last January.
Gill was in a much better mood last week after voters mostly went for Democrats. “I was really relieved,’’ she said.