Obama casts his trip to Asia as an economic mission 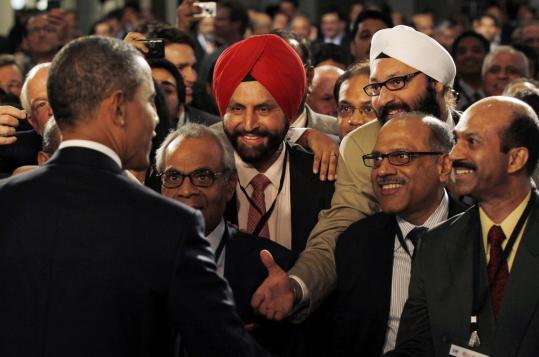 President Obama met with audience members after speaking at a gathering of US and Indian business executives in Mumbai yesterday. He said his move to ease restrictions on US exports to India is aimed at creating jobs. (Jason Reed/Reuters)
By Sheryl Gay Stolberg and Vikas Bajaj New York Times / November 7, 2010

MUMBAI, India — President Obama, fresh off a stinging electoral defeat for the Democrats, opened a 10-day tour of Asia yesterday with a courtship of corporate America, including private meetings with business executives and an announcement that he will lift longstanding restrictions on US exports of closely held technologies to India.

After an election season dominated by voter dissatisfaction with his management of the economy, the president is casting the four-nation trip, which will also take him to Indonesia, South Korea, and Japan, as an economic mission, with a heavy emphasis on creating jobs and opening foreign markets to US goods.

He hopes to come home from South Korea, for instance, with a renegotiated free trade deal, and trade was high on his agenda in India. His move to ease so called dual-use restrictions, which bar US export of technologies that might be used to build weapons, has been a high priority for companies here and in the United States.

“As we look to India today, the United States sees an opportunity to sell our exports in one of the fastest-growing markets in the world,’’ Obama told a gathering of political leaders and Indian and American executives. “For America, this is a jobs strategy.’’

India has long sought a loosening of the export restrictions more for political reasons than economic ones — the country did not want to be viewed as a rogue state — and the move is part of a bid to strengthen relations with India.

But the trip, Obama’s first extended foray overseas this year, is also an attempt to ease tensions with America’s chief executives, many of whom spent the recent campaign accusing the White House of being antibusiness — and pouring money into the coffers of Republican candidates.

More than 200 American executives timed a business conference to coincide with Obama’s arrival in Mumbai — and the president reciprocated by showering them with attention.

The chief executive of , Jim McNerney, who also leads the President’s Export Council, greeted Obama when Air Force One touched down and was rewarded with a ride downtown aboard the presidential helicopter. Later, Obama met privately with American chief executives, among them Jeffrey R. Immelt of , who has been critical of the White House in the past.

“It’s unprecedented,’’ Immelt said in an interview, praising Obama for talking up trade, a politically risky move for a Democrat. “I don’t remember President Bush ever having a mission like this. I think it’s quite rare and I hope the first of many.’’

The White House also announced that, as part of the trip, US and Indian companies signed or are about to sign 20 deals worth about $10 billion that will help create more than 50,000 jobs in the United States.

Many of those deals, however, have been in negotiations for some time. Some, like Boeing’s sale of C-17 cargo planes, have yet to be finalized in spite of 11th-hour negotiations between Indian and US officials in the days leading up to Obama’s arrival.

In the afternoon, Obama met with a group of 25 Indian executives, including entrepreneurs who are working on start-ups involved in electric cars and water purifying companies. Obama told the group that he wanted to hear from them about new ideas that could help create jobs in the United States and emerging markets like India, said Shaffi Mather, a young Indian businessman who attended the meeting.

India, of course, is a delicate place for Obama to talk about jobs, given US concerns about outsourcing.

As a candidate, Obama often lamented the tax incentives and lack of educational opportunities in the United States that, as he liked to say, forced children from Boston to compete for jobs with children from Bangalore.

Here in Mumbai, he steered clear of the Boston-Bangalore analogy, as he made the case that investment overseas can create jobs at home.

“There still exists a caricature of India as a land of call centers and back offices that cost American jobs,’’ Obama said. “That’s a real perception. But these old stereotypes, these old concerns ignore today’s reality: In 2010, trade between our countries is not just a one-way street of American jobs and companies moving to India. It is a dynamic, two-way relationship that is creating jobs, growth, and higher living standards in both our countries.’’

News
Opinion
More political coverage
Your comment is subject to the rules of our Posting Policy
This comment may appear on your public profile. Public Profile FAQ