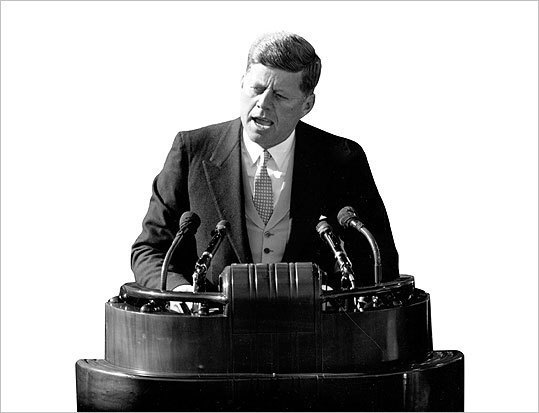 Ted Sorensen, who died early last week, was legendary among all of us in the speechwriting fraternity for the extraordinary body of work he crafted with President John F. Kennedy. Even the Republicans pilfered from him, and inside the Clinton White House, he represented a gold standard that we constantly strove to reach, with imperfect results (it’s harder than it looks).

There is a great deal to be said about why those speeches were so good. Obviously, much of the credit belongs to the person delivering the speech, and Ted Sorensen was blessed with a partner of rare ability. But he brought his own great abilities, which dovetailed perfectly with those of President Kennedy. He was lean in every sense; not a single word was wasted in those taut, muscular orations. Famously, Sorensen consulted the great speeches of American history before writing the inaugural address, and discovered that Lincoln’s Gettysburg Address had very few polysyllabic words. The result was those thrilling two syllables, “ask not!” (the “ask” stretched dramatically into Bostonese), more insisting than asking. They were essential to set up the rest of the famous sentence. Not just the “ask not,” but the important pause that came after, with an index finger jabbing the frosty air. That was political theater of the highest order.

Sorensen was gifted in many other ways; his phenomenal work ethic, his lightning speed, his mordant wit. He was mischievous, and with his perfect crop of hair, retained an air of Kennedy-esque boyishness well into senescence. All of those qualities gave spice to the speeches — unlike so much of Washington oratory, every utterance contained the possibility of a surprise; an unusual allusion; a bracing witticism; and always, a summons to action.

In Sorensen’s memoir, “Counselor,” he wrote, “I approached each speech draft as if it might someday appear under Kennedy’s name in a collection of the world’s great speeches.” That is setting the bar pretty high — but consider the results. This top ten list of speeches by John F. Kennedy and Ted Sorensen does not include what may have been the greatest contribution Sorensen made to history — he drafted the letter to Nikita Khrushchev that helped to resolve the Cuban Missile Crisis. It also does not include some memorable speeches drafted by other pens within Kennedy’s inner circle — for example, the exquisite address given at Amherst College in 1963, praising poetry, drafted by Arthur Schlesinger Jr. But what a list, all the same.

1. Address at American University, June 10, 1963. This remarkable speech completely recast the Cold War. Coming seven months after the Cuban Missile Crisis, it proclaimed that the United States and the Soviet Union could find common ground; indeed, that they must. It has less flash than many Kennedy speeches, and more hard-won realism, seeing the world “as it is,” a line used by President Obama in his 2009 Nobel address. Declaring peace a human right, it offered a new conciliatory approach to the Soviet Union, whose leader, Nikita Khrushchev, responded by calling it “the greatest speech by any American president since Roosevelt.” A nuclear test ban treaty followed shortly. Three short sentences were especially moving, and as it proved, all too prophetic: “We all breathe the same air. We all cherish our children’s future. And we are all mortal.”

2. Inaugural Address, January 20, 1961. This speech, of course, was the template for all that followed. It pulsed with energy and determination; it contained a real agenda for the future; and it energized a generation that had been quiescent, mainly because it had never been asked to do anything. It contained both power and poetry, including rhymes (“Let every nation know...that we shall oppose any foe”). Despite a rare Sorensen clunker (the mixed metaphor, “if a beach-head of cooperation may push back the jungle of suspicion...”), this was a speech for all time.

3. Televised Address on Civil Rights, June 11, 1963. With a lawyer’s clarity, Sorensen’s draft went to the heart of America’s most entrenched problem. A single sentence perfectly cast the tone, claiming that civil rights was a moral issue “as old as the Scriptures and as clear as the Constitution.” (Perhaps if the Constitution had been more clear, we might have eliminated slavery earlier than we did, but that is a historian’s question, not a speechwriter’s.) Martin Luther King Jr., watching at home said, “Can you believe that white man not only stepped up to the plate, he hit it over the fence!”

4. Berlin Speech, June 26, 1963. No American president has ever looked more attractive to the rest of the world than President Kennedy did on the day he went into West Berlin, encircled and nearly walled off by communism, and delivered this short, exciting, and utterly winning address. It contained memorable soundbites (“Ich bin ein Berliner”), surprising flashes of humor (JFK thanked his interpreter for translating his German into German), and the drama of a president perfectly matched to his time.

5. Speech to the Greater Houston Ministerial Association, September 12, 1960. The nomination of a Roman Catholic touched off tensions that went to the heart of American history. And Sorensen and Kennedy went to American history to resolve them. The most effective line, tugging at Texan heartstrings, came when JFK reminded his listeners that no one knew who was Catholic among the defenders of Alamo, “for there was no religious test at the Alamo.”

6. Address at Rice University, September 12, 1962. Two years to the day after another Houston speech, Kennedy affirmed the role of science in driving the nation’s progress forward, and called specifically for lunar exploration. Again, it was couched in history (William Bradford got a surprising shout-out), and classically punchy Sorensen sentences about exertion and excellence. (“We choose to go to the moon. We choose to go to the moon in this decade and do the other things, not because they are easy, but because they are hard....”)

7. Speech on Algeria, July 2, 1957. This speech, given by then-Senator Kennedy, proclaimed his independence from party orthodoxies on the right and left, and his willingness to think anew about the Cold War and the role of the developing world within it. It infuriated Democratic Cold Warriors like Dean Acheson, but with the advantage of hindsight, we can see that it was not only visionary, but correct. Sorensen called it “one of the most carefully researched speeches he ever gave,” and it had to be, for it questioned nearly all of the assumptions guiding US foreign policy.

8. Address at University of Washington, November 16, 1961. This speech is not as well remembered, but it contains a single line which is often quoted because of its relevance to globalization and the shrinking dominance of the United States, especially in the wake of Iraq. Kennedy said, “We must face the fact that the United States is neither omnipotent nor omniscient — that we are only 6 percent of the world’s population — that we cannot impose our will upon the other 94 percent of mankind — that we cannot right every wrong or reverse each adversity — and that therefore there cannot be an American solution to every world problem.”

9. Commencement Address, Yale University, June 11, 1962. After a long and witty introduction, poking fun at the fact that so many of JFK’s critics were Yale men, the president went into the heart of his speech, defending the role of government to improve lives and promote fairness. It bears re-reading in a week of Tea Party insurgency, and it also reflects on the difficulty of getting right with historical figures whom we magnify or vilify out of proportion to the real human beings they were: “For the great enemy of truth is very often not the lie — deliberate, contrived, and dishonest — but the myth — persistent, persuasive, and unrealistic. Too often we hold fast to the cliches of our forebears. We subject all facts to a prefabricated set of interpretations. We enjoy the comfort of opinion without the discomfort of thought.”

10. Farewell to Massachusetts, Boston, January 9, 1961. This call to integrity was delivered inside a legislative chamber (the General Court) that has not always lived up to those standards, but has stood the test of time. Inspired by President Lincoln’s farewell to Springfield, the speech insisted that it was not a farewell, but like Lincoln’s, it was all the same. It went deeply into the original errand that brought settlers to the Bay Colony, citing John Winthrop’s City on a Hill passage, correctly for once (“We shall be as a city on a hill — the eyes of all people are upon us”). That phrase has been borrowed by many others, notably Ronald Reagan (who added the un-Kennedyesque adjective “shining”), but never more effectively. Along with Daniel Webster’s Reply to Hayne, and his Bunker Hill Address, it is the finest speech ever given about this state by an elected official.

Ted Widmer served in the Clinton White House from 1997 to 2001, first as a speechwriter, then as a senior adviser. He directs the John Carter Brown Library at Brown University and is a senior research fellow with the New America Foundation.