After defeating Bielat on Tuesday, Barney is back to being Barney 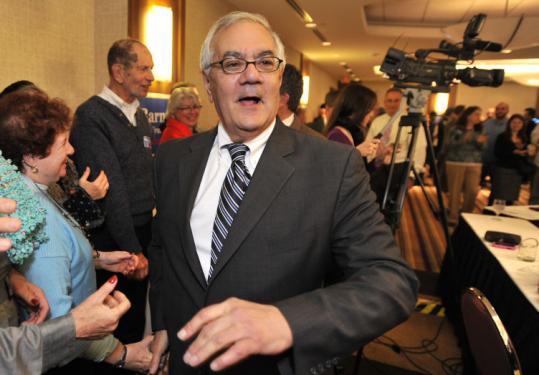 During the campaign, Barney Frank showed a gentler, more gracious side. But anyone who watched his victory speech Tuesday night saw the old Barney come roaring back, as he gave a history lesson to vanquished challenger Sean Bielat, called the Boston Herald irrelevant, and otherwise displayed his caustic wit.

No one knows that side better than members of the press, who regularly find themselves dressed down by Frank for questions he considers lacking.

After he stepped down from the stage and worked his way through a crowd of supporters last week, he met a pack of TV, radio, print, and online reporters vying to ask him questions. “Come on, guys. Will you behave like adults please?’’ he said, as people jockeyed for position in front of him. “What is it?’’

One TV reporter asked Frank, “As this seemed to be getting closer, did you fear that you might lose?’’

“To whom did it seem to be getting closer? To you? It didn’t to me. In fact, it wasn’t getting closer,’’ Frank said, calling out Bielat for having claimed to be within the margin of error in his own poll on the final week. “As Winston Churchill once said, when Hitler said he was going to wring England’s neck like a chicken, ‘Some chicken, some neck.’ Some margin. Some error. It was close to a 20-point win.’’

In fact, it was a shade under an 11-point win — a thumping, but still the closest race for Frank in 30 years.

The same reporter asked Frank if Bielat had called to concede. “No,’’ Frank said, not knowing Bielat had just spoken with his communications director.

“Has he called at all?’’ the reporter asked.

Kennedy stirs more talk she would pose formidable challenge to Brown
After a campaign season in which she traveled across the state backing Democratic candidates, Vicki Kennedy is once again stirring speculation that she may be ready to plunge into politics herself with a run at Scott Brown to reclaim the US Senate seat once held by her late husband, Edward M. Kennedy.

From Lynn to Worcester to New Bedford, Kennedy was wooing not only the crowds, but Democratic operatives and leaders who watched her perform. She has said she has no interest in running, but the pressure will be on her. Some insiders are convinced she is the only candidate who would clear the Democratic field and avoid a draining and divisive primary fight. She could also raise the sort of money to match Brown’s huge war chest.

“She’s creating a lot of pressure on herself, whether she likes or not,’’ said one Democratic figure who watched her rev up voters this fall.

If she doesn’t run, others, including several members of the congressional delegation who are out of power in Washington after the GOP’s sweep of the House, will surely take a look at it.

Meanwhile, as the 2012 Senate race nears, Democrats may take some satisfaction that Brown’s political operation may not be as formidable as it seemed after his win in January. Brown’s campaign manager, Beth Lindstrom, was unable to help James McKenna mount a strong race for attorney general. And the Shawmut Group, which helped steer Brown to victory, came up short in several races in the region.

Senate hopeful took her case to canine constituents
Sandi Martinez said Massachusetts was going to the dogs even before Tuesday, when she failed again to make it to Beacon Hill.

Just before Election Day, the founder of the Greater Lowell Tea Party and three-time unsuccessful Senate contender sent a campaign mailer addressed to the dogs of the Third Middlesex District.

From her own dog, Paco. Who is dead.

“Don’t roll over and play dead,’’ the letter says. “Tell your humans that we’ve had enough ‘baloney’ on Beacon Hill. Baloney belongs in my stomach, not in politics.’’

Martinez’s campaign manager, Michael Benn, confirmed that Paco was indeed struck by a car in September, after the mailings were already in the envelopes. So Martinez sent them out anyway, including a human campaign pitch and a signature from Paco, in paw print.

“Together we can restore sanity to Beacon Hill,’’ Martinez wrote. “Throw me a bone!’’

Tweet of the week
There was little solace for Democrats last week, except, of course, for Massachusetts, which turned back the Republican surge that trampled much of the country. After the dust had settled, Sean Roche (@seanroche), who identifies himself as coauthor of a Newton blog, offered this brief Tweet to the White House: “Dear President Obama, Sorry about Scott Brown. Hope we made up for it a little last night. Love, Massachusetts.’’

News
Opinion
More political coverage
Your comment is subject to the rules of our Posting Policy
This comment may appear on your public profile. Public Profile FAQ