THIS STORY HAS BEEN FORMATTED FOR EASY PRINTING
Northern N.E.

It’s Leahy in Vt.; Maine up for grabs 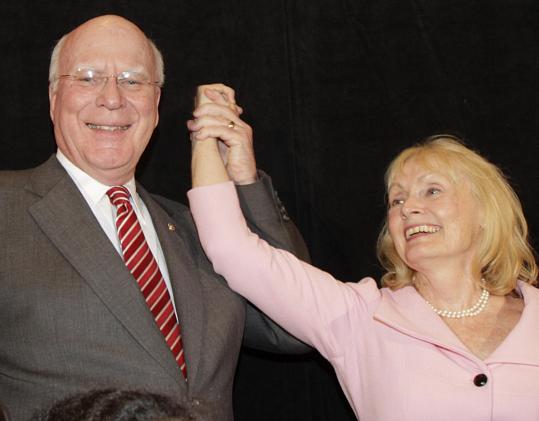 Democrat Libby Mitchell conceded, saying, “It’s really a tough year for a Democrat, particularly for someone who’s been in office.’’

Camps in what turned into a two-person race settled in for a long night, saying that totals from small, rural towns would determine the outcome.

Riding a wave of voter disenchantment with elected officials, LePage has led the field in poll numbers since his surprise primary win in June, while Mitchell worked to shore up her Democratic base. Cutler edged up in the polling numbers while seeking to parlay voters’ weariness with partisan politics to his gain.

The Maine gubernatorial election was one of several key races in northern New England:

■ Democratic Representatives Mike Michaud and Chellie Pingree of Maine both won reelection, turning back challenges by their Republican opponents in an election in which voters were angry and members of the Tea Party movement were raising their voices in Maine and across the nation. In the First District, Pingree beat Republican Dean Scontras of Eliot, who sought to portray her as Maine’s version of House Speaker Nancy Pelosi. Michaud turned back a challenge by Republican Jason Levesque, an Auburn businessman who described Michaud as out of touch with conservative voters in the Second District.

■The US Senate’s second-longest-serving member is headed back to Washington. Senator Patrick Leahy of Vermont easily won reelection to a seventh term yesterday, defeating GOP challenger Len Britton and five others. Leahy, a Democrat and chairman of the Senate Judiciary Committee, said he was honored to have been reelected and believes his refusal to use attack ads against his opponents played a part in his victory.

Leahy, 70, who was first elected in 1974, has earned a reputation as a liberal stalwart on issues such as government secrecy, the wars in Afghanistan and Iraq , and US Supreme Court nominations.

He amassed more than $4 million in contributions for his campaign and barely broke a sweat fending off political newcomers Britton and independent Daniel Freilich.

Leahy said yesterday that he knew he would win, based on the reactions he got from voters as he campaigned around the state with his wife, Marcelle.

Leahy, a former prosecutor, focused on agricultural issues early in his Capitol Hill career, looking out for Vermont’s interests: dairy and maple-syrup production

■ The race for governor in Vermont, pitting Democrat Peter Shumlin against Republican Brian Dubie, was too close to call.

In the Maine race for governor, LePage has stressed pocketbook issues during his campaign, pointing to a state government he claims is bloated and strangles too many businesses in red tape. While the Waterville mayor’s blunt and unvarnished speaking style has drawn attention and criticism, there were no signs it has rattled a base that includes eTea Party movement forces.

Mitchell, the veteran legislator and current Senate president, spent much of the campaign playing defense as her rivals hammered away at a theme that state government under her leadership has become too costly for Maine taxpayers. For her part, Mitchell stressed job creation through a new business-friendly attitude in Augusta, and educational issues from kindergarten to college.

Cutler dodged verbal darts from both parties as he asked voters to reject the contest’s partisanship and support his plans to restructure government, create a state energy finance authority and merge the university and community college systems.

While Moody brought a message of less government intrusion in business to the debate, he never amassed the survey numbers or campaign funds to represent a real threat to win. Scott stayed in the low single digits from the start.