THIS STORY HAS BEEN FORMATTED FOR EASY PRINTING
NEW HAMPSHIRE 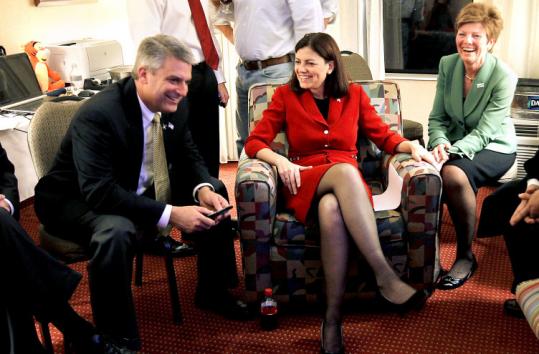 A fiscal and social conservative, Ayotte painted herself as an outsider who will cut government spending and vote to repeal health care reforms. She also opposes stimulus spending and special requests by members of Congress called earmarks.

In other key New Hampshire races:

■ Republican Frank Guinta, former mayor of Manchester, ousted incumbent Carol Shea-Porter — 57 percent to 39 percent, with 57 percent of the precincts tallied — in the state’s First Congressional District after a campaign spent casting the two-term Democrat as House Speaker Nancy Pelosi’s spendthrift shadow. Guinta, 40, was dogged throughout the campaign by questions about his personal finances. But he kept the focus on the issues.

■ Governor John Lynch, a moderate Democrat, overcame an anti-incumbent groundswell to defeat conservative Republican John Stephen for a fourth consecutive two-year term. With 54 percent of the vote in, Lynch had 51 percent to Stephen’s 47 percent.

■ Republican Charlie Bass regained the Second District seat he lost to Hodes, beating Democrat Ann McLane Kuster 49 percent to 46 percent. Bass emphasized he is an experienced, fiscal conservative who has been a strong, independent voice.

Last night, he paid tribute to Kuster, whom he has known for most of his life. “I admire her passion, her energy, her commitment,’’ said Bass, who had called her an activist for House Speaker Nancy Pelosi’s agenda during the campaign.

About 70 percent of voters said they felt dissatisfied or angry about the way the federal government is working, and three-quarters of them backed Ayotte over Hodes. She held an even wider lead among the one-fifth of voters who said Congress’s highest priority should be cutting taxes.

Hodes said he got caught in a Republican tidal wave.

“It’s a historic turning of the tide of the state and the country. Timing is very important in politics. This sure proves it,’’ he said.