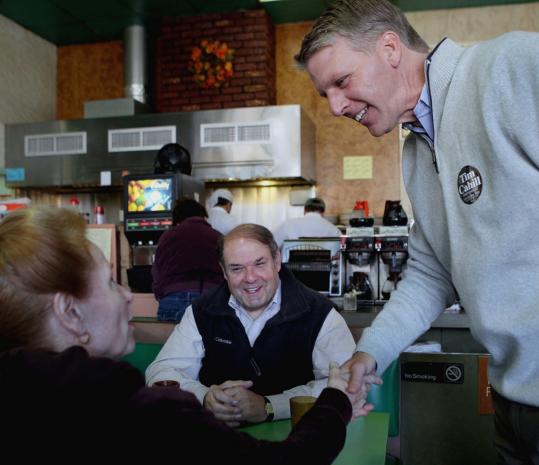 WORCESTER — Laura Lemay and Lucille Sidley are both unemployed. Both believe the winner of Tuesday’s election for governor must make jobs a top priority. But they split over who ought to get the chance.

“I really hope it’s Charlie Baker,’’ said Lemay, a 34-year-old Rutland resident who came to Worcester yesterday to cheer on the Republican. “If the change comes, small businesses are going to start hiring people again. They’re not going to be afraid of the economy.’’

Sidley, a grandmother of three who was standing outside the Democratic Party headquarters in Newburyport for a visit by Governor Deval Patrick, said Charles D. Baker is “not for the small people.’’ Patrick, she said, “knows people’s stories . . . he cares for people, and he works hard.’’

The two front-runners traveled the state by bus yesterday to rally supporters like Lemay and Sidley and pick up any remaining undecided voters. Nearly everyone in both camps acknowledged some anxiety about the close race and said turnout will decide who wins. Each side is convinced it has the edge — Republicans because of more enthusiastic voters, Democrats because of their massive ground opera tion.

During stops in Foxborough, Natick, Worcester, and Springfield, Baker tried to exhort the crowds to blitz their friends, family, and acquaintances on behalf of the campaign by offering them a clear break from the past. Patrick pumped up campaign volunteers in Holyoke, Natick, Lawrence, Newburyport, and Lynn, sounding familiar themes about the importance of “generational responsibility’’ and his commitment to improving health care, education, and economic opportunity.

“We’ve been through a difficult period, but [Patrick] made tough choices, and the right choices at every juncture,’’ said supporter Wade Blackman, 34, who went to a backyard event with the governor in Natick with his wife and 9-month-old daughter.

State Treasurer Timothy P. Cahill, a distant third place in most polls, also emphasized jobs yesterday as he traveled the state with a caravan of supporters, his campaign said.

Baker and about 100 supporters traveled in a pair of buses. In Foxborough, a crowd of several hundred people in the town center chanted, “We want Charlie! We want Charlie!’’ Baker promised that as governor he would “be fighting for the people who pay the bills.’’ He said his administration would be “four years of focusing on jobs, jobs, jobs.’’

Many in Baker’s crowds were eager for the message, though some said they were more excited about US Senator Scott Brown and Congressional candidate Sean Bielat, each of whom joined him for parts of the tour, which drew hundreds of people.

Sue Collins, a 60-year-old special education assistant in Foxborough, held a sign for Bielat, for example, but did not want to say who she was voting for in the governor’s race.

“I want a new person in Congress, and I’m glad Scott Brown is our senator,’’ she said. Baker, she said, is a “good man.’’

Michael Creed, a 49-year-old Medway man who chairs his local GOP committee, called this the “best slate of Republican candidates they’ve had in years.’’ Baker, he said, has a different personality from Brown, the party’s new standard-bearer, but has the turnaround experience the state needs.

“He’s not as dynamic as Scott Brown, but he’s a good candidate and he’ll do well if he’s elected,’’ Creed said.

Patrick’s day began in Holyoke at a canvass kickoff, where the governor greeted local union members, shook hands, and spoke with supporters.

“We’ve crisscrossed the state already twice in just the last few days,’’ Patrick said in Natick. “It’s emblematic of what this campaign is about. It’s about the people.’’

Richard Sidney, a 57-year-old Patrick volunteer, acknowledged that it has been difficult confronting voters who just want change.

“It’s very hard to stand up in the face of the anti-incumbent sentiment,’’ he said. “There’s no position there, there’s nothing to argue with or even discuss.’’

Hours later in Lawrence, at a rally held on an asphalt and grass plaza, Patrick urged his supporters not to let up. Gilda Duran, a neighborhood planner for the city and veteran Democratic activist, said Patrick had developed a loyal following in her city over the last four years by simply showing up, particularly during crises.

“We usually don’t get visited,’’ she said. “When a governor comes to visit a community, he also sees the problems and issues a community has.’’

For his part, Brown fired up Baker’s crowds by invoking three indicted House speakers on Beacon Hill and a “senator who put money down her shirt,’’ referring to former state Senate colleague Dianne Wilkerson. Brown told reporters it was unfair to compare the massive crowds he drew before January’s special election with the hundreds who showed up for Baker, noting that his election had become the focus of an entire nation.

“I was the only race in the country at that time,’’ he said. Baker is one of a number of candidates competing for attention.

Brown said he was confident. “I’ve noticed over the last couple of weeks, everything’s moving in the right direction,’’ he said.

Allyson Picard, a 46-year-old Sterling resident who attended Baker’s Worcester rally, said she is feeding off the enthusiasm and believes the race will turn on the choice over “business as usual or a fresh face with fresh ideas.’’

But neither side was taking anything for granted.

“I’m very, very, very cautiously optimistic,’’ said Paul Yorkis, a 65-year-old from Medway who owns a small real estate company during Patrick’s Natick rally. He said the economic climate had made it difficult to make the case for Patrick, but that his supporters are increasingly engaged.

“The one-on-one effort we’re making on the ground I think is very helpful,’’ he said. “But I think everyone’s going to be working until 8 p.m. on election night.’’

Local news
National news
Opinion
Voter resources
Your comment is subject to the rules of our Posting Policy
This comment may appear on your public profile. Public Profile FAQ