After bowing out of race, Loscocco holding on to money — just in case 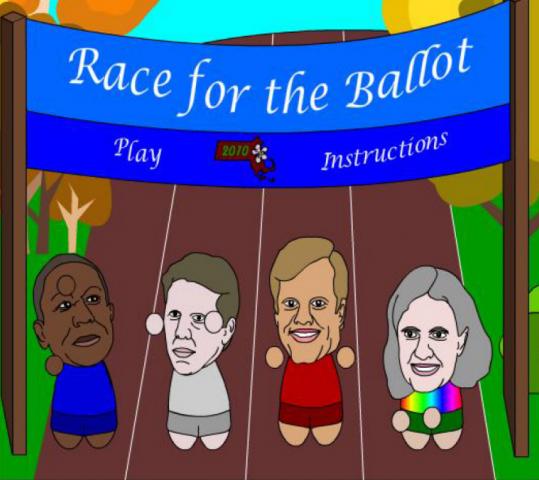 An online game designed by students at Becker College pits gubernatorial candidates against one another in a foot race.
Globe Staff / October 31, 2010

More than a few people were cranky with Paul Loscocco when he left Timothy P. Cahill at the altar. The terms “turncoat’’ and “traitor’’ got bandied about with unusual frequency.

It turns out that some of the crankiest were contributors who donated to Cahill’s running mate just weeks before he jumped ship and endorsed Republican Charles D. Baker for governor. That includes top Cahill campaign aides.

Now they want their money back. But the Loscocco committee says it won’t return it until Cahill releases Loscocco from legal claims and stops trying to get him to help cover outstanding bills.

“We’re just looking for a release,’’ said Loscocco political director Matthew P. Carleo. “Paul doesn’t want Tim to sue him for anything and then turn around and not have the money on hand in order to pay any legal expenses.’’

In an Oct. 20 letter to contributors, the Loscocco committee said that only donations that were contributed in September will be returned “on a strictly voluntary and discretionary basis,’’ and only after Cahill’s claims are resolved “to our satisfaction and not otherwise.’’

Since campaign-finance regulations call for donations to be returned within 90 days in most cases, the letter warns, Cahill’s contributors won’t get their money back at all if he prolongs the legal battle.

“We have urged The Tim Cahill Committee to promptly reconsider its position in this respect in the hope of avoiding such a result,’’ Ann-Marie Loscocco, Loscocco’s wife and treasurer, wrote to a contributor, in a letter obtained by the Globe.

A campaign has no obligation to return contributions after exiting a race, of course. But candidates who end campaigns can — and often do — return their donors’ money as a gesture of good faith, said Brad Balzer, deputy director of the state Office of Campaign and Political Finance. — STEPHANIE EBBERT

Frank no fish out of water outside his own district

There was something a little, well, fishy about one of Barney Frank’s endorsements last week.

In a glowing editorial, the 15-term Newton Democrat received the nod from the Gloucester Times. The catch: Gloucester is almost 40 miles outside Frank’s district, which includes Newton, Taunton, and New Bedford.

The paper said it was endorsing Frank because of his work on fisheries issues, but it acknowledged the endorsement was unusual.

“We don’t pretend to know all of the issues and dynamics in play within Frank’s district,’’ the paper said. “But we recognize that fishermen and their advocates throughout Massachusetts, New England, and beyond cannot not afford to lose this vital advocate for Fishing Nation from the halls of Congress.’’

“It was kind of a nice surprise when we heard about it,’’ said Harry Gural, a Frank spokesman. “From our point of view, there’s a reason for it. He works very hard on fishing.’’ — ALAN WIRZBICKI

Nobody’s a frontrunner in this race

Can’t wait until Tuesday? You can make whichever candidate for governor you like win the race — and you can do it right now.

Well, some helpful computer-game-design students at Becker College in Worcester have created a nifty online game in which Deval Patrick, Timothy P. Cahill, Charles D. Baker, and Jill Stein (complete with a rainbow-colored shirt) race to the finish line. Pick your candidate, avoid pitfalls on the road such as red tape, and make a run toward Beacon Hill.

The game even has a dose of public service, directing players to the official websites of the four candidates. Give it a go at www.gamingstudents.com/BallotRace/GubRace.html. — GLOBE STAFF

Tweet of the week
Political junkies remember well Martha Coakley’s (@marthacoakley) clumsy line to a reporter during her Senate race about how, unlike rival Scott Brown, she didn’t see the wisdom in shaking hands outside Fenway Park in the cold. The attorney general has acknowledged her political shortcomings in that contest and has been determined not to repeat them in her bid for reelection. So where was she Tuesday night for the Celtics’ home opener? “Greeting fans outside the Garden — go !’’ she wrote.

Local news
National news
Opinion
Voter resources
Your comment is subject to the rules of our Posting Policy
This comment may appear on your public profile. Public Profile FAQ