Obama not exactly a cutup on ‘The Daily Show’ 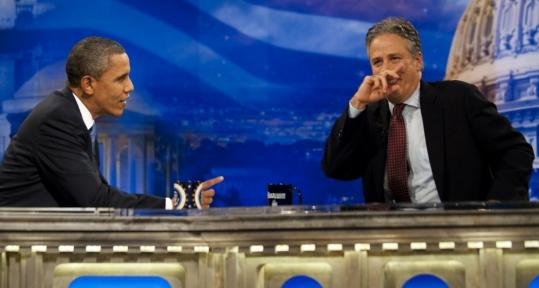 During an interview, Jon Stewart asked President Obama how the political environment got to the point that Democrats “seem to be running on ‘Please, baby, one more chance.’ ’’ (Jim Watson/AFP/Getty Images)
October 28, 2010

WASHINGTON — President Obama apparently thinks politics is no laughing matter, even when he’s staring down a comedian. Obama barely cracked any jokes during an appearance yesterday on “The Daily Show’’ despite host Jon Stewart’s many attempts to draw the president out with a few wisecracks.

Less than a week before the Nov. 2 congressional elections, Obama said he hopes Democratic lawmakers who made tough votes will be rewarded with another term in office. He promised more but unspecified accomplishments in the two years left on his own term and urged people to vote — early if they can.

Stewart asked how the political environment got to the point that Democrats “seem to be running on ‘Please, baby, one more chance’ ’’ just two years after Obama ran a successful presidential campaign built around “very high rhetoric, hope and change.’’

“Are you disappointed in how it’s gone?’’ asked the Comedy Central satirist.

Obama seemed to suggest that he wasn’t disappointed. He said his advisers had told him during the euphoria of his 2008 election to “enjoy this now because two years from now folks are going to be frustrated. That is, in fact, what’s happening.’’

He listed high unemployment, sinking housing values, and an economy that is growing but not fast enough as reasons. But Obama said that his administration has also stabilized the economy, noting it has grown for nine months in a row, and that he signed health care and financial bills. He suggested that his administration did so much that “we have done things that some folks don’t even know about.’’

“What have you done that we don’t know about?’’ he asked. “Are you planning a surprise party for us, filled with jobs and health care?’’

“Over and over again, we have moved forward an agenda that is making a difference in people’s lives each and every day,’’ Obama replied. “Is it enough? No. And so I expect, and I think most Democrats out there expect, that people want to see more progress.’’

Obama also said he hopes voters will reward some Democrats for taking tough votes. Obama cited Representative Tom Perriello of Virginia, who voted for the health care bill and is in a tight race against Republican state Senator Robert Hurt. Obama plans to campaign with Perriello tomorrow.

US District Judge Janet Bond Arterton issued a stipulated order requiring Secretary of the State Susan Bysiewicz not to apply state election laws that restrict political advertising within 75 feet of polling places to the wrestling fans who wear WWE clothing on Tuesday.

Vince McMahon, the head of WWE and Linda McMahon’s husband, filed a lawsuit seeking to stop local election workers from asking WWE fans to cover up their wrestling apparel at the polls. He accused Bysiewicz, a Democrat, of violating voters’ free speech rights.

WWE had been a hot topic in the race to fill the seat currently held by Democratic Senator Chris Dodd, who is retiring. McMahon trails Democrat Richard Blumenthal, the state’s attorney general, by double digits, according to recent polls.

But a constitutional quirk could have lawmakers — not voters — deciding who gets to succeed Republican Governor Jim Douglas, who is stepping down after four terms.

In Vermont, as in Mississippi, the winning candidate for governor must get more than 50 percent of the votes cast. If no candidate does so, the election goes to the Legislature for a vote. Georgia, too, has a majority requirement, but it results in a runoff election that puts the choice in voters’ hands.

Not in Vermont. Under the state Constitution, the election would be decided — in a secret ballot — by the 150 House members and 30 senators when they convene in January. Democrats currently control both houses.

Vermont statewide elections have ended up in the Legislature 22 times, most recently in 2002. Only twice have lawmakers not sided with the candidate who won a plurality at the polls.

This year, there are seven gubernatorial candidates on the ballot. A recent Vermont Public Radio poll had Dubie at 44 percent and Shumlin at 43 percent. The five independent candidates each captured about 1 percent. p>— Associated Press

Obama donates $4.5m to Democrat committees
WASHINGTON — President Obama, campaigning for fellow Democrats in the final days before the midterm election, has put his own money on the line.

Obama donated $4.5 million from his presidential campaign account — more than half of the money left over from his record-setting fund-raising — to the three Democratic party fund-raising committees last month, Federal Election Commission reports show.

Political news
Opinion
Voter resources
Your comment is subject to the rules of our Posting Policy
This comment may appear on your public profile. Public Profile FAQ