Candidate says they were just quick to act 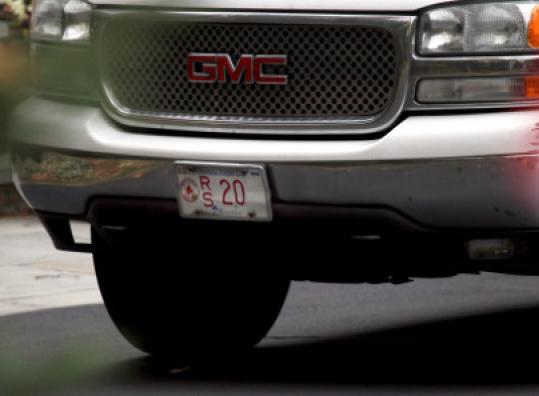 In a state obsessed with vanity plates and baseball, a low-number plate is a coveted status symbol.

The “RS’’ license plates, in existence for seven years, have been so popular that the Registry of Motor Vehicles is running out. When six plates were auctioned for charity in 2003, they drew huge sums: Ben Affleck paid $50,000 for the number 1, and Red Sox minority owner Phillip H. Morse bid $140,000 for Ted Williams’s retired number 9.

So how did more than two-thirds of the first 100 numbers go to state Representative Karyn Polito, a Shrewsbury Republican running for state treasurer, her friends, relatives, campaign donors, and others with ties to her?

The chain of events began in 2002, when Polito filed a bill that allowed the Red Sox to issue the plate through the Registry. The Jimmy Fund, which raises money for cancer research, was designated by the Sox to collect the surcharge on each registration.

Before the Registry will make a charity plate, it requires 1,500 prepaid applications. Polito said in an interview that she encouraged people close to her to sign up so the Registry had enough orders. “I took the lead and worked with my friends and family to collect the pledges so that we could create the Red Sox license plate to benefit the Jimmy Fund,’’ she said.

Within a year after the legislation was signed by Jane Swift, the acting governor, Polito and her family were outfitted with some of the choicest plates. Polito received number 2. Her father and brother’s companies and other relatives were assigned numbers 20, 21, 24, 26, and 80. Number 30 was originally issued to a Polito supporter from Shrewsbury, then traded like a baseball card, first to her father’s company, Polito Development Corp., in 2004 and then to her husband, Stephan Rodolakis, later in that year, according to records.

In fact, 68 of the first 100 “RS’’ plates issued went to people with ties to Polito, many of whom live in Shrewsbury, according to Registry records. The Registry lets charities assign plate numbers to the first 1,500 applicants.

Jimmy Fund officials and Polito said the plates were available to anyone who applied and that the numbers were assigned on a first come, first served basis after the bill was signed into law Sept. 26, 2002.

Registry records, however, contradict that. On all 68 applications, the words “per KPolito’’ or some variation appears, according to the documents, obtained through a public records request.

Dozens of applicants applied before Polito’s friends, relatives, and donors, but received higher numbered plates, including:

■ A Peabody driver who submitted an application on Sept. 24, 2002, and was assigned plate number 8179, without specifically requesting it on the form. J.A. Polito and Sons filed its application the next day and received number 20.

■ A Charlestown driver who asked for the “lowest number available,’’ filed an application a month before the law was signed and got number 545.

■ A Needham driver applied on Oct. 4, 2002, asking for any two-digit plate, and was assigned 1912. Several applicants, whose forms bore Polito’s name, applied days or weeks later and received two-digit plates.

Few if any, of the low-number plates appear to have gone to members of the general public. Along with the plates Polito appeared to help secure, most of the other low-number plates went to officials at the Jimmy Fund, Dana-Farber Cancer Institute, or the Red Sox, including co-owner Larry Lucchino, who has number 11.

Number 96 went to state Senator Joan Menard’s political committee; Romney’s son Tagg received 88. (Six of the low-number plates, including Affleck’s, were given out in a special auction in August 2003.)

Polito, who is running for treasurer as a watchdog who will fight what she calls the culture of corruption on Beacon Hill, did not explain why her name appeared on dozens of applications. but called the plate program “a huge success story.’’

“It’s a win for the state and the charity,’’ she said. “I love both the Red Sox and the Jimmy Fund. They are two of my favorite organizations.’’

Jimmy Fund executive David Giagrando, who has the number 7 Red Sox license plate, said he was not sure why Polito’s name appeared on the applications. “I don’t have the forms in front of me; I can’t see them,’’ he said.

“It could be people she helped to recruit, and maybe that’s the number they requested,’’ he said.

Giagrando insisted that the plate numbers were assigned on a first come, first served basis and that if someone requested a number and it was available, it was assigned to them.

Susan Goodenow, a spokeswoman for the Red Sox, said in a statement, “We have a long and proud history with the Jimmy Fund, and we gladly supported this fund-raising effort at its inception and helped the Dana-Farber make our entire fan base aware of the opportunity to purchase a plate.’’

In 2004, the State Ethics Commission cracked down on politicians receiving playoff tickets from professional sports teams, saying that if the tickets were not available to the general public, politicians should not get special treatment, even if they pay face value. Later that year, the Ethics Commission clarified the rules in a special advisory opinion.

“Whenever a public employee is offered anything from a private party,’’ it wrote, “he must first ask himself two questions: (1) whether the thing being offered is of ‘substantial value’ and, if so, (2) whether it is being offered for or because of any official act or act within his official responsibility that he performed or will perform.’’ The commission has defined substantial value as anything worth $50 or more.

Registry spokeswoman Ann Dufresne said there are more than 40,000 active Red Sox plates. The $40 specialty plate fee has generated more than $5 million for the Jimmy Fund since 2003. Of the $40, $12 goes to the Registry to cover the cost of manufacturing the plate. When the plate is renewed, the entire $40 goes to the Jimmy Fund.

With the Red Sox plates nearly gone, the Jimmy Fund has issued a new charity plate, with the prefix “JF.’’ The charity auctioned off plates numbered 1-100 last summer, raising $160,000.

Correction: Because of a reporting error, an earlier version of this story misidentified the governor who signed a 2002 bill allowing the Boston Red Sox to issue a license plate through the state Registry of Motor Vehicles. Jane Swift, the acting governor at the time, signed the legislation.