R.I. Democrat rips Obama for not backing him 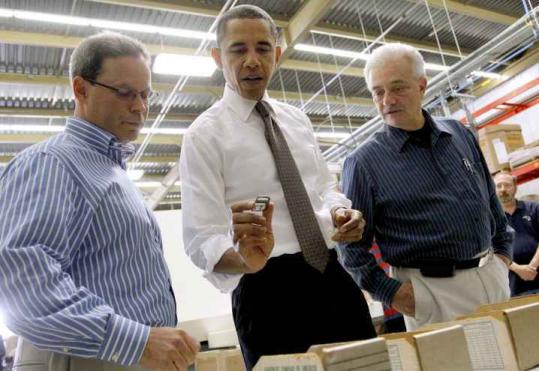 PROVIDENCE — When President Obama yesterday kicked off the final full week of campaigning before next Tuesday’s elections, his were not the only fighting words.

Hours before the Democrats’ standard bearer arrived to tour a Woonsocket factory and join two fund-raisers, the party’s candidate for governor, Frank Caprio, told a Providence radio station that Obama can “shove it’’ after learning the president would not endorse him.

The White House said on Sunday Obama would not endorse anyone in the gubernatorial race. Caprio, the state’s treasurer, backed Hillary Clinton for president in 2008. He is battling Republican-turned-independent Lincoln Chafee, who endorsed Obama in 2008, and Republican John Robitaille, who has never held elected office.

In response, Caprio skipped appearing with Obama at several events as planned and angrily told WPRO-AM that the president can “take his endorsement and really shove it.’’

For Obama, it was his first visit to the Ocean State as president. He toured the American Cord and Webbing factory, which received a government-facilitated loan that is allowing it to expand its manufacturing of buckles for outside gear. He called the plant an example of a small business that benefited from his administration’s series of targeted tax cuts and push to ease lending.

And he skewered Republicans on their attempts to undermine such efforts.

He also linked the GOP to big-moneyed groups.

“We can’t have special interests sitting shotgun. We’ve got to have middle-class families up in front,’’ Obama said. “We don’t mind the Republicans joining us. They can come for the ride, but they’ve got to sit in back.’’

Before Obama’s visit, the Rhode Island State Police bomb squad destroyed what was called a suspicious package found near the Woonsocket factory.

Captain Darren Delaney told The Providence Journal the item was discovered at about 11 a.m. There was no immediate word on what the package might have been.

Obama’s choice of Rhode Island for his one-day trip was partially to raise money for Democratic House candidates elsewhere in the country. Officials said the $500,000 would be split between Providence Mayor David Cicilline, who is running for the House seat of Patrick Kennedy, and the Democratic Congressional Campaign Committee. Kennedy is retiring.

“Frank Caprio has spent his career fighting for the values of the Democratic Party. He deserves the full support of our party and its leaders,’’ said executive director Nathan Daschle.

Obama did not address Caprio’s remarks or take questions during a tour of American Cord & Webbing and subsequent speech to reporters.

The White House would not comment directly on Caprio’s comments.

Rhode Island went 63 percent for Obama in the 2008 general election, and Caprio is seen as more conservative than Chafee. Robitaille himself has said he and Caprio may be drawing from the same pool of voters.

Chafee was among the most liberal Republicans in the Senate during his time there from 1999 to 2006. He has supported more environmental protections, opposed President George W. Bush’s tax cuts, and was the only Republican senator to vote against the Iraq war.

“The senator was shocked at how intemperate the remark was,’’ Trainor said. “Perhaps the strain of the campaign is wearing on Treasurer Caprio.’’

Michael Steele, the Republican National Committee chairman, said he was amused by the conflict.

“He’s the Democratic nominee, for goodness’ sakes,’’ said Steele, who was in Rhode Island for a rally for Representative John Loughlin, Cicilline’s opponent. “It’s really insulting [to Caprio], when you think about it.’’