House, Senate hopefuls may exceed $2b in spending 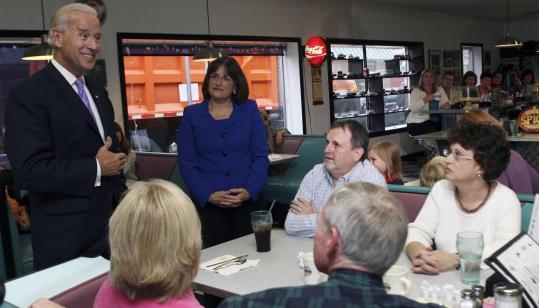 A REGULAR JOE — Vice President Joe Biden campaigned for Ann McLane Kuster, to his left, at a diner in Nashua yesterday. Kuster is running in the 2d Congressional District against Republican Charlie Bass, a former US representative. (Jim Cole/ Associated Press)
October 26, 2010

WASHINGTON — House and Senate candidates have shattered fund-raising records for a midterm election and are on their way to surpassing $2 billion in spending for the first time, according to new campaign finance data.

To put it another way: That’s the equivalent of about $4 million for every congressional seat up for grabs this year.

The frantic fund-raising by candidates has largely been overshadowed in recent weeks by a tide of spending by outside interest groups, most of it targeting vulnerable Democrats. Such groups could spend $400 million or more by next Tuesday.

But the latest Federal Election Commission data, along with a new study from a campaign watchdog group, show that most of the money sloshing around the 2010 elections is being raised and spent by the candidates.

As of last week, House and Senate campaigns reported taking in more than $1.5 billion, exceeding the total collected by congressional candidates in 2006 and in 2008, FEC data show. Most of that money has been put toward advertising and other expenses.

The Public Campaign Action Fund, a watchdog group, will release a study today predicting that House candidates alone could spend nearly $1.5 billion by the time the dust settles on Election Day. The calculation is based on previous elections in which about half of a campaign’s money was spent in the final month of the contest.

Senate campaigns are also on track to exceed the $550 million mark from 2006, bringing the likely total to $2 billion or more by the time the ballots are counted.

The surge is driven in part by the unusually broad battlefield in the House, where an estimated 90 seats are in play, almost all of them held by Democrats. Many Democratic incumbents are emptying their coffers in an attempt to win the message wars against GOP-allied interest groups.

“Both members of Congress and their challengers need to raise a huge amount of money to respond to these outside groups,’’ said David Donnelly, national campaigns director for the Public Campaign Action Fund, which advocates for public financing of elections. “Candidates are losing control of their elections unless they get on the phone to raise money to get their own ads on the air.’’

Some of the most striking increases are evident on the House Republican side, where a deep bench of competitive candidates could wrest control of the chamber from Democrats. Republicans have also raised more and spent less, giving them an even larger advantage in the last week of the campaign. Through the third quarter of 2008, Democratic House candidates had outraised their opponents by $64 million.

This year, the balance has been reversed, with Republicans outraising Democrats by $30 million, according to the action fund’s analysis, which is based on data from the Center for Responsive Politics.

GOP political consultants say the reasons for the shift are simple: Republican voters are more enthusiastic and they are eager to give money to challengers seeking to oust Democrats. — WASHINGTON POST

Alaska Senate hopeful says he violated ethics policy
JUNEAU — Alaska GOP Senate candidate Joe Miller has acknowledged that he was disciplined for violating an ethics policy while working as a local government attorney in 2008.

The admission, which came Sunday night in an Anchorage debate with two rivals, followed a judge’s order that his personnel file from his time at the Fairbanks North Star Borough be released. Several news organizations had sued for the information.

Speculation over the issue and Miller’s earlier refusal to discuss it had become a key topic of the campaign.

After a former borough mayor said Miller was nearly fired for using government computers in a failed effort to oust the state GOP chairman in 2008, Miller told CNN he had violated ethics policy. On Sunday, Miller said he was suspended for or docked three days’ pay for participating in a private poll during his lunch hour. He said it was a mistake he’s learned from. — ASSOCIATED PRESS