THIS STORY HAS BEEN FORMATTED FOR EASY PRINTING
Campaign 2010 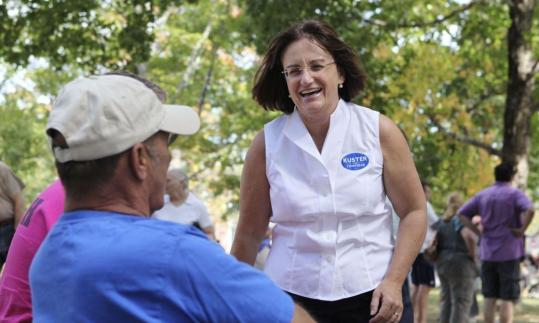 Defying national trends that favor the GOP, Kuster, now a Democrat, had climbed to a 7-point lead in the most recent poll. The open Second Congressional District race remains volatile, with outside interests pouring money in and a blizzard of negative ads intensifying in the campaign’s closing days.

The harsh contest has implications beyond its back story of old family ties and new rivalries. It is about who will win the political center in a crucial swing state, a topic much on the minds of top Democrats and Republicans across New England as increasing numbers of voters feel alienated from both parties.

Over the last two decades, two polarizing trends have transformed politics and marginalized moderate Republicans in the Granite State: the Democratic Party has strengthened, and conservatives have become the dominant force in the GOP.

Bass had been one of those moderates. He followed the example of his father, Perkins Bass, and spent six terms in Congress starting in 1994, establishing a centrist record of his own but earning the wrath of conservatives, who dubbed him a RINO (Republican in name only). Then independent and Democratic voters tossed Bass from office in the war-weary, anti-incumbent atmosphere of 2006.

Now, in his comeback bid, Bass, 58, has gambled on a rightward turn, seeking to firm up his conservative credentials with an embrace of the Tea Party movement. He signed an antitax pledge circulated by Americans for Prosperity, a deep-pocketed group that is bankrolling Tea Party organizing efforts around the country. Bass won the primary against two more conservative candidates.

Bass insists that he remains true to his roots. Moderate Republican “still is the brand,’’ he said in an interview in a pub across the street from New Hampshire’s gold-domed State House.

“I don’t buy the traditional buckets into which people get dropped, because I am what I think a Republican should be.’’ He defined that as “fiscally conservative and pro-libertarian.’’

Bass’s strategy does not appear to be working. The latest WMUR Granite State Poll showed him falling behind Kuster for the first time in the race, with 36 percent support compared to her 43 percent. The poll carried another ominous sign for Bass: His standing declined sharply among independents.

“Charlie Bass is less popular now than he ever has been,’’ said Andrew Smith, director of the University of New Hampshire Survey Center, which conducted the poll for WMUR.

His drop in the polls may have to do with his shift on the ideological spectrum, he added. “Any time you do that, it makes the candidate look disingenuous.’’

Kuster tried to capitalize on Bass’s alignment with the Tea Party movement at an AARP-sponsored debate earlier this month in Concord, where boisterous supporters waved signs outside a convention hall. Bass made a gentlemanly reference to Kuster’s mother, Susan McLane, a former state senator against whom he campaigned in a GOP primary for the congressional seat in 1980. (They both lost to Judd Gregg, now a US senator.)

“I want to salute your mother,’’ Bass said, turning toward Kuster on the opposite side of the stage. Kuster tartly replied: “Thank you, Charlie. She’d be shocked by your politics now.’’

In interviews, each candidate — who as children occasionally boated together on Newfound Lake — accused the other of forsaking core Granite State principles.

“She represents a very different philosophy from her ancestors, because her ancestors, like me, were for opportunity and entrepreneurship,’’ said Bass.

During a break from campaigning at a truck stop diner in Lebanon, Kuster accused Bass of neglecting his forebears’ fiscal prudence by participating in a historic deficit binge during George W. Bush’s presidency.

Kuster, 54, is running for elective office for the first time. She is campaigning as a staunch enemy of deficit spending but sticks to Democratic doctrine on other issues, supporting the health care overhaul law and cap-and-trade environmental legislation, for instance, as well as President Obama’s plan to eliminate income tax cuts for the rich. She said she generally supported the economic stimulus legislation but said it was not crafted properly and had not created enough jobs.

The campaign is one of several key races in New Hampshire, in which Democrats and Republicans may end up dividing the spoils. The GOP’s candidate to replace a retiring Gregg in the Senate, Attorney General Kelly Ayotte, has built a solid lead over Representative Paul Hodes, who defeated Bass for the congressional seat in 2006.

In the state’s other House race, Frank Guinta, a Republican and former Manchester mayor, is ahead of incumbent Democrat Carol Shea-Porter. But in addition to Kuster’s encouraging poll numbers, Democrats have cause for hope in the state’s governor, John Lynch, who has a double-digit advantage over his Republican challenger, John Stephen.

Republican Scott Brown was able to capture frustration and anger among independents in Massachusetts and win the late senator Edward M. Kennedy’s seat in a special election. But he was a fresh face and relatively unknown, making it easier to define himself for a new election and a particular voter mood.

Bass, however, a well-known commodity in New Hampshire, has turned off voters with his “extreme makeover,’’ said Garrison Nelson, a University of Vermont political science professor. “Charlie has basically chosen to yoke himself with the national conservative movement.’’

It is the latest retreat of moderate GOP leaders in New England, Nelson added. Other moderates have fled the party rather than become more conservative, including Lincoln Chafee, the former Rhode Island senator who is running for governor as an independent, and former Vermont senator James Jeffords.

And that is just fine with conservative Republicans in New Hampshire, who are most likely to provide contributions and on-the-ground support for GOP candidates. In interviews, several said they supported one of Bass’s more conservative opponents during the primary but were now getting behind him.

“If he’s truly changed his tune, we’re going to know,’’ said Paul Petit, a funeral director in Pembroke. “He was part of a Congress that lost touch with why they were there and who put them there.’’

Bass previously served as president of a moderate group called the Republican Main Street Partnership, which includes Maine Senators Olympia Snowe and Susan Collins as members. But in this campaign Bass sometimes sounds like Senator John McCain, the GOP presidential nominee in 2008 and another Republican Main Street member who tacked hard to the right in his reelection effort this year in Arizona.

Meeting with GOP state lawmakers in the basement of the Barley House pub in Concord, Bass offered remarks on immigration that would draw cheers at any Tea Party rally.

“I don’t blame Governor [Jan] Brewer for doing what she did with that Arizona law,’’ Bass said, referring to a crackdown on undocumented workers that has been denounced as unconstitutional by immigration advocates and President Obama’s administration.

The lawmakers lingered over platters of lunch sandwiches and partook in free pints of ale. One of the officials on hand, State Representative Michael McCarthy of Nashua, said he now firmly supports Bass, after backing one of his more conservative opponents in the primary. He said he trusts that Bass’s transformation is more than temporary.

“He’s obviously an intelligent man,’’ he said. “He’s going to respond to voters.’’