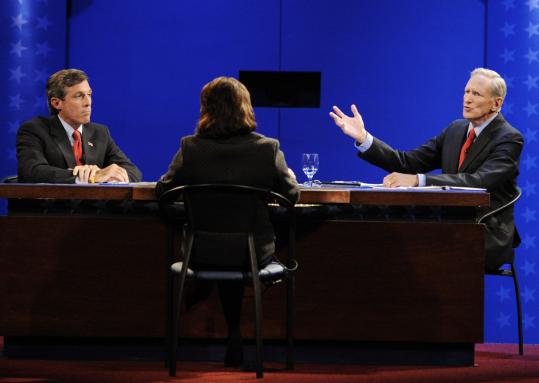 WASHINGTON — The pollsters and pundits consider it counterintuitive, even delusional. But House Democrats insist they have a path to success in next week’s congressional elections that would stave off the Republican offensive by flipping a few key congressional seats their way.

They have identified Republican-held seats in Louisiana, Delaware, Illinois, and Hawaii where strong Democratic candidates can win on Nov. 2, and party leaders say opportunities are emerging in the campaign’s final days for Democrats to play offense in several more races as part of a long-shot strategy to hold their majority.

“There are a number of great candidates out there that we’re very bullish about,’’ said US Representative Chris Van Hollen of Maryland, head of the Democratic Congressional Campaign Committee, which works to elect Democrats to the House.

The campaign arithmetic, however, suggests Election Day will be bleak for House Democrats.

Democratic candidates are strongly contesting in just four of 178 Republican-held districts, according to specialists, though a handful of other races are close enough to present possible pickup opportunities.

Those meager numbers pale next to the roughly 90 Democratic-held seats facing substantial challenges from Republicans, according to the nonpartisan Cook Political Report, which tracks congressional races.

“The trajectory of the election is clear,’’ said David Wasserman, who follows House campaigns for Cook. “Democrats have done all they can to disqualify Republican challengers and get out their vote. So far it just hasn’t worked.’’

The small number of GOP seats seriously threatened this year is a testament to both the Democratic Party’s successes in knocking off weak Republicans in the strong Democratic years of 2006 and 2008, and to this year’s very different political environment, which favors the GOP.

Republicans are expected to net 40 to 50 House seats this fall, according to Cook and The Rothenberg Political Report, which also tracks campaigns. The GOP must net at least 39 House seats to take a majority.

There is a glimmer of hope in the strategy of defending Democratic incumbents while picking off as many Republican seats as possible. “If instead of winning three Republican seats, the Democrats were to win six, and then manage to save a handful more of their own incumbents, then they’d have a shot at holding onto the House,’’ said Stu Rothenberg, publisher of The Rothenberg Political Report.

Here then, is the foundation for a would-be upset:

The most endangered incumbent Republican is Representative Joseph Cao of Louisiana. He’s a lawyer and a Vietnamese-American, representing a heavily African-American district that includes New Orleans.

Cao won in an upset two years ago against a damaged Democratic incumbent, William Jefferson, who was fighting bribery allegations. Cao’s campaign themes of honesty and public ethics connected with voters fed up with public corruption.

“Our message has been that I have represented this district with integrity and honesty,’’ Cao said in a phone interview. “When you look at my race back in 2008, over half of my votes came from Democrats. So the issues of honesty and integrity will transcend race, will transcend party.’’

Cao has a moderate voting record; he was the only House Republican to support President Obama’s health care reform bill on its first pass through Congress. In a second vote, Cao opposed it.

Cao’s challenger, Democrat Cedric Richmond, a state representative, has attacked Cao for opposing other key provisions of President Obama’s agenda, such as the federal stimulus. In a district that is more than 70 percent Democratic, Richmond has tried to lash Cao to the conservative agenda of House Republican leadership, including Minority Leader John Boehner.

“People here are paying attention to the balance of power,’’ said Richmond. “If [Cao] is reelected he’ll vote for Boehner as speaker of the House, and we know the direction they’ll try to take the country.’’

A public poll from early October suggested Richmond was ahead by roughly 10 percentage points. Democrats are counting on their vast numerical advantage in the district to take the seat.

The Democrats’ next-best chance at flipping a Republican seat is in Delaware, which has only one representative in the House. That seat was held for nine terms by moderate Republican Mike Castle, who decided to forgo reelection to run for US Senate.

Though Castle was the choice of the state’s GOP establishment, he lost in the Senate primary to conservative Christine O’Donnell, a favorite of the Tea Party movement supporters. The same fate befell the establishment’s candidate to replace Castle in the US House: Republican Michele Rollins was defeated in the GOP primary by Tea Party favorite Glen Urquhart, who owns a commercial real estate and investment company.

“When Urquhart won the primary, it meant that the Castle formula for victory — holding the Republican vote and coaxing large numbers of moderate Democrats to cross over and support the Republican candidate — would no longer work,’’ said Joe Pika, a political science professor at the University of Delaware.

Carney, in an interview, said the Tea Party fervor that is boosting Republicans around the country has actually worked in his favor in moderate Delaware.

“The biggest concern that I had, and still have, is enthusiasm on our side in terms of getting our voters out,’’ said Carney. “While there’s a lot of enthusiasm in that [Tea Party] group, it has also energized our base of Democrats and moderate voters up and down the state. It’s been helpful.’’

Urquhart, in response, said that Delawareans are accustomed to splitting their votes to maintain at least one Republican in the three-member federal delegation. “They like to have that balance,’’ he said. And he said his message of spending cuts to address the country’s debt is connecting with voters. “Debt used to be something economists talked about. Now everybody is talking about it.’’

A Monmouth University poll earlier this month suggested Carney had a lead of 9 percentage points.

Democrats also have set their sights on the Illinois seat being vacated by moderate Republican Mark Kirk, who is in a tight battle for US Senate. The fight to replace Kirk, who represents affluent Chicago suburbs, is a hard-fought race between Republican Bob Dold, who runs a pest management company, and Democrat Dan Seals, who twice lost narrowly to Kirk.

Public polling has been inconsistent and the congressional committees for both parties are running TV ads in the district, suggesting a close contest.

Djou won the seat with 39 percent of the vote in a special election in May, after Hanabusa and another Democrat split their party’s vote in a race with more than a dozen candidates.

Polling this fall has been tight. The National Republican Congressional Committee has run ads to boost Djou, a sign that they consider him in trouble.

After those races, Democratic pickup prospects get progressively slimmer.

The party is mounting a credible challenge to US Representative Dan Lungren, a California Republican whose odd-shaped district includes Greater Sacramento. After that, the next best opportunities may be in two Florida districts and one in Washington, though campaign analysts say those races currently favor the GOP.