THIS STORY HAS BEEN FORMATTED FOR EASY PRINTING
10th Congressional District

Keating raises Perry’s past as police officer once again 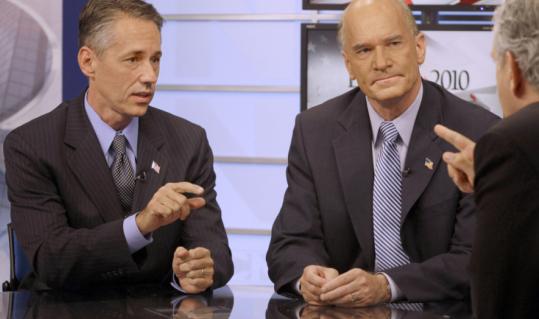 NEWTON — With their race now firmly in the national spotlight, the two candidates to represent Cape Cod and the South Shore in Congress met in a tense and at times personal debate yesterday that touched on jobs and foreign policy, but grew most animated when the candidates attacked each other.

State Representative Jeffrey D. Perry, a Sandwich Republican and former Wareham police officer, faced accusations that he had lied about his role in the illegal strip search of two teenage girls by a police officer under his supervision in the early 1990s. His rival, Norfolk District Attorney William R. Keating, also accused Perry of lying several times, including on his bar application.

Perry hit back at Keating, saying the Quincy Democrat was engaged in mudslinging by raising the case in debates and ads. Perry has given varying accounts of his role in the Wareham case, but was never found at fault.

“You should know about due process; due process is that you get a fair hearing,’’ Perry told Keating, who was sitting next to him in the New England Cable News studio, where the 23-minute debate took place. “I was never charged. I was never disciplined.’’

The Wareham case has long dogged Perry and took on a new dimension last week when Channel 5 reported that he had mischaracterized the events on his bar application. In the application, he portrayed himself as having taken a leading role in investigating the case, when in fact it came to light only when a police officer from another town called Perry’s superior officer. Perry also said in the bar application that one of the victims had been arrested, a misstatement he acknowledged during the debate.

“I used the word arrested and I should have used detained,’’ he said.

The incumbent, Democrat William D. Delahunt, is not seeking reelection, and the race to succeed him is considered the best chance Republicans have had in years to win a US House seat in Massachusetts. In a sign of the race’s competitiveness and national implications, both parties are funneling money into the 10th Congressional District, which stretches from Quincy to Nantucket.

Scott Brown won the district by 20 points in a special US Senate election, raising Republican hopes of taking the House seat.

During the debate, Keating faced questions about his changed position on Cape Wind, which he opposed until declaring his candidacy for Congress. Keating said he had shifted his position because he wanted to support energy independence.

“A lot of people changed their mind, not just me,’’ he said. “The cost of not acting is even greater.’’

On Social Security, Perry criticized Keating for sending what he said were inaccurate mailers to voters. Perry said Keating wrongly accused him of favoring cuts to Social Security benefits.

“It’s a fear tactic, trying to scare seniors,’’ he said. Perry said he did not favor changing benefits for anyone over 50, but wanted to keep an open mind on other changes to the program.

Asked about the military’s policy banning people who are openly homosexual from serving, Keating said he opposed the “don’t ask, don’t tell’’ policy, and praised a court decision this week blocking enforcement of the ban. Perry said he would vote to repeal the policy only if the military requested the change.

“If the decision of the military commanders indicates it should be changed, then that makes sense to me,’’ he said.

Perhaps the oddest moment came in a discussion of foreign policy, with the Democratic candidate criticizing the Obama administration’s handling of the war in Afghanistan, and the Republican defending it.

Keating said he would have voted against a war funding request submitted by the White House earlier this year. “I won’t give Barack Obama, George Bush, or anyone a blank check.’’

Perry said he would have supported the war funding bill.

“Whenever the president puts our troops in harm’s way . . . we need to unconditionally support them,’’ he said. But Perry said he disagreed with Obama’s decision to announce a withdrawal date from Afghanistan.

Independent candidate Maryanne Lewis, a former state representative from Scituate, was not invited to the debate but showed up anyway. Speaking to reporters outside NECN’s studios, she said voters deserved to hear from other candidates in the race.

“It would have been better if I was on the inside,’’ she said.