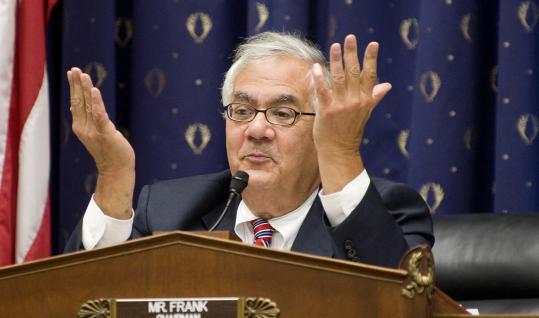 Republican challenger Sean Bielat has been hammering away at Representative Barney Frank, who is seeking reelection in a district that stretches from Newton to New Bedford. Bielat has called Frank “one of the leaders of the economic disaster.’’ (Jay Mallin/ Bloomberg News)
By Donovan Slack Globe Staff / October 14, 2010

WASHINGTON — When US Representative Barney Frank spoke in a packed hearing room on Capitol Hill seven years ago, he did not imagine that his words would eventually haunt a reelection bid.

The issue that day in 2003 was whether mortgage backers and were fiscally strong. Frank declared with his trademark confidence that they were, accusing critics and regulators of exaggerating threats to Fannie’s and Freddie’s financial integrity. And, the Massachusetts Democrat maintained, “even if there were problems, the federal government doesn’t bail them out.’’

Now, it’s clear he was wrong on both points — and that his words have become a political liability as he fights a determined challenger to win a 16th term representing the Fourth Congressional District. Fannie and Freddie collapsed in 2008, forcing the federal government to buy $150 billion worth of stock in the enterprises and $1.36 trillion worth of mortgage-backed securities.

Frank, in his most detailed explanation to date about his actions, said in an interview he missed the warning signs because he was wearing ideological blinders. He said he had worried that Republican lawmakers and the Bush administration were going after Fannie and Freddie for their own ideological reasons and would curtail the lenders’ mission of providing affordable housing.

“I was late in seeing it, no question,’’ Frank said about the lenders’ descent into insolvency.

Republican Sean Bielat, who is trying to unseat Frank, has been hammering away at him with a website titled “Retire Barney’’ that features clips of Frank at the 2003 hearing and elsewhere. During debates this week, he called Frank “one of the leaders of the economic disaster’’ because he supported Fannie and Freddie when they were taking the risks that led to their collapse.

But Frank said that putting blame entirely on him is unfair — and several independent analysts agree. They said Republicans also failed to take warning signs seriously enough to avert disaster, despite controlling the White House and both houses of Congress between 2003 and 2007, a crucial period leading up to the Fannie and Freddie failures.

“Selling Fannie and Freddie as a purely partisan issue, it doesn’t really work,’’ said Jonathan Koppell, director of the School of Public Affairs at Arizona State University. “Both parties have plenty of responsibility.’’

Another analyst, University of Maryland economics professor Peter Morici, put it more succinctly. “This is a bipartisan mess,’’ he said.

That mess has a long history. The government created Fannie Mae in 1938 to make mortgages more affordable, and its cousin Freddie Mac came along in 1970. Congress allowed them to operate as private companies.

Known as government-sponsored enterprises, they didn’t provide mortgages themselves, but rather bought loans from banks and mortgage brokers, freeing up cash so the lenders could make more loans. Fannie and Freddie held or bundled the loans and sold them to investors as mortgage-backed securities.

In an effort to increase homeownership, the Clinton administration in the late 1990s and the Bush administration in the 2000s pushed Fannie and Freddie to meet growing quotas for buying affordable home loans. Those pushes, combined with a drive for more profits at the enterprises, drove Fannie and Freddie to take on more risk and more debt. They backed subprime and other risky loans, including mortgages for borrowers without proof of steady income.

At the same time, Fannie and Freddie were spending $155 million on a massive lobbying operation seeking to thwart any crackdown on their operations.

They poured $4.2 million into congressional campaign coffers in the years before they collapsed, according to the Center for Responsive Politics. Their executives, lobbyists, and political action committees donated to both Republicans and Democrats, including Frank, who received about $65,000 between 2000 and 2008, a Globe review of individual contributions found.

But the director of the federal office responsible for overseeing Fannie and Freddie, Armando Falcon, began noticing their expanding portfolios and increasing reliance on risky investments. In early 2003, Falcon warned Congress in a 118-page report of the companies’ potential for a catastrophic failure that could jeopardize the economy.

Falcon sent his report to Frank and other Financial Services Committee members and asked that Fannie and Freddie be required to disclose more about their finances and be subject to tougher oversight. He followed it up with another report in June 2003.

A few months later, the Bush administration said it would try to rein in the enterprises by creating a regulatory authority within the Treasury to oversee them.

The warning signs were compounded by revelations in 2003 and early 2004 that Freddie Mac and Fannie Mae had misstated earnings by billions of dollars in an effort to meet growth targets.

But Frank and other Democrats still opposed tighter regulation, Frank most notably in his public statements saying there was nothing wrong with Fannie and Freddie. He and other House Democrats also sent a letter to President George W. Bush in June 2004, saying the proposed crackdown could “weaken affordable housing performance . . . by emphasizing only safety and soundness.’’

“I had just taken over as ranking member, all this stuff was very new to me,’’ he said.

Frank tried to tackle Fannie’s and Freddie’s problems from another angle, he said, introducing a predatory lending bill in spring 2004 that would reduce subprime loans. But the legislation did not address the voracious quest for profits or other problems at the mortgage lenders.

So he initially supported a Republican measure in 2005 that would have imposed stricter standards on the lenders. But he voted against it in the full chamber because it did not include funding for affordable housing, he said. The bill passed the House.

When the legislation went to the Senate, Republican support was splintered, and the White House withdrew its backing, saying the bill was not strong enough.

Top Bush strategist Karl Rove still blames Frank for its failure, saying Frank and other Democrats portrayed a vote to regulate Fannie and Freddie as “anti-black, anti-brown, anti-poor, anti-homeowner’’ because of the enterprises’ affordable housing mission.

“They were brutal,’’ Rove said in a recent interview. “And so Republicans shied away from confronting it.’’

Frank dismissed those assertions, saying the splintering of GOP support was not his fault.

“They couldn’t get their act together,’’ he said.

When the Democrats won control of the House in 2006 and Frank became chairman of the Financial Services Committee the following year, one of the first measures he helped pass imposed tougher regulations on Fannie and Freddie and prevented them from taking on too much risk.

“It’s the Republican line. They say it happened on my watch, but my watch began in January 2007,’’ Frank said. “The mistake I made was a nonoperational one — I wasn’t in power. From the day I became chairman, I think we did everything we could.’’

By the time Frank’s bill passed, it was too late.

Fannie’s and Freddie’s debt had reached perilous levels but they had only a small amount of capital on hand — roughly equal to one-40th of their debt, according to the Stern School of Business at New York University. When home prices leveled off and homeowners defaulted on mortgages, Fannie and Freddie could not absorb the losses.

In July 2008, then-Treasury Secretary Henry Paulson called Frank and told him the government would need to spend “billions of taxpayer dollars to backstop the institutions from catastrophic failure,’’ according to Paulson’s recent book. Frank, despite that conversation, appeared on national television two days later and said the companies were “fundamentally sound, not in danger of going under.’’

Unlike 2003 — when, Frank said, he didn’t realize what was going on — this time, he was deliberately trying to reassure the public, he said.

Less than two months later, the government seized Fannie and Freddie and the bailout began.

They were among many culprits in the financial crisis, including investment bankers, mortgage brokers, and ratings agencies.

“The financial crisis was caused by deteriorating underwriting standards, almost all of which was done by privately securitized mortgages on Wall Street,’’ said William Wheaton, an economics professor at the Massachusetts Institute of Technology.

Frank recently played a key role in the passage this summer of extensive regulation of Wall Street. Still, it is Fannie and Freddie that haunt him on the campaign trail.

Koppell, at the University of Arizona, said it was an unusual marriage of interests that propelled the mortgage lenders into collapse: housing advocates who wanted more affordable loans, business interests that profited from greater volume, and politicians on both sides of the aisle who wanted to please the advocates and the businesses.