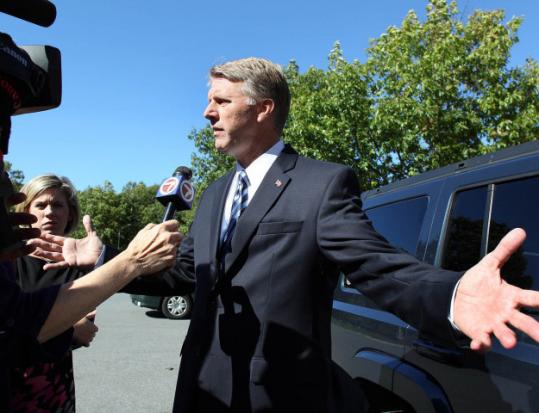 In the latest bizarre twist in the governor’s race, independent Timothy P. Cahill’s former running mate, who is now aligned with Republican Charles D. Baker, sought to draw Governor Deval Patrick into a widening controversy yesterday over back-room politicking that has hijacked the campaign.

Cahill’s former running mate, Paul Loscocco, charged in a two-page statement that Patrick senior strategist Doug Rubin, who used to work for Cahill, had been coordinating a negative ad campaign against Baker with Neil Morrison, a former top Cahill deputy in the state treasurer’s office and with the Democratic Governors Association.

“The moment my running mate looked me in the eye and essentially admitted that his campaign was coordinating efforts with the Patrick campaign and the Democratic Governors’ Association . . . served as the defining moment for me in making the difficult decision to withdraw from the Cahill-Loscocco ticket,’’ Loscocco said.

But Loscocco offered no evidence to support his allegations, which Rubin and Cahill’s campaign both vigorously denied. They said Loscocco, whom Cahill’s camp called a “tool of Charlie Baker’s sleazy hit team,’’ lacks any credibility after orchestrating, with former top Cahill advisers, a plot to desert the independent ticket and throw their support to the Republicans. Morrison declined to comment.

Loscocco’s statement, coming a day after Cahill filed a politically charged lawsuit against his former operatives, fueled a fight that all sides call a distraction from the real issues in the campaign. With less than a month until Election Day, the furious charges and countercharges, which continued flying yesterday, promise to muddy the contest through the final stretch.

Cahill made the rounds on talk radio to discuss the lawsuit he filed Thursday alleging that his aides committed political treason by leaving his campaign to help Baker.

He called on Baker to fire any staff members who sought information from Cahill’s former operatives, even though there is no evidence they received any.

“I’m tired of playing defense with these guys,’’ Cahill said on WRKO-AM. “We’ve got to play offense.’’

He told reporters later that Republicans were trying to “destroy me and destroy my candidacy and not give people a choice on Nov. 2.’’

Even as Baker called Cahill’s lawsuit a “major distraction,’’ the Republican sought to highlight aspects of it that he said raised questions about whether Cahill, the state treasurer, was using his state-paid employees to help his gubernatorial campaign. Baker and Cahill are battling each other for anti-Patrick voters.

Responding to questions from reporters, Attorney General Martha Coakley said she would look into the allegations against Cahill. “Certainly, if there is a violation of the law, whether it’s an ethics violation, a campaign finance violation, we’ll take a good review of it, and we’ll take the action that’s necessary,’’ she told WHDH-TV. Hours later, the state Republican Party asked the State Ethics Commission to look into the same issue.

Baker, after kissing and hugging senior citizens at the Milano Senior Center in Melrose, acknowledged that his staff had followed up on rumors about improper cooperation between Cahill’s state and campaign staff.

Cahill denied coordination between his campaign and government offices.

“I don’t believe they have something,’’ Cahill said on WRKO. “If they had something, they would have already thrown it out there.’’

“We did not seek, nor do we have, nor did we receive, nor do we want, any proprietary information from the Cahill campaign at any time,’’ Baker told reporters.

Early in the day, Patrick sought to steer clear of the controversy over Cahill’s lawsuit, calling it a distraction.

Asked whether the dispute between Baker and Cahill would boost his campaign, Patrick said, “I don’t have any comment on that.’’ Later, after Loscocco’s statement implicated Rubin, Patrick declined to comment at length, but called the charge about his top strategist false.

Rubin himself pushed back strongly at the accusation.

“When Paul Loscocco stood by Charles Baker last week, he once again proved that his word cannot be trusted,’’ Rubin said in a statement. “His most recent explanation of his actions is a desperate attempt to divert attention from his latest backroom deal and is in fact directly contradicted by numerous e-mails made public recently.’’

Loscocco, criticized as a turncoat for switching allegiance less than a month before the election, sought vindication yesterday in a statement titled, “Loscocco Sets the Record Straight.’’ In it, he described the “personally difficult decision’’ he made to leave Cahill’s side, which he also attributed to his being kept out of the campaign’s inner circle for much of the year.

Loscocco’s political director, Matthew P. Carleo, could not explain why Loscocco did not reveal the information when he endorsed Baker a week ago. Loscocco previously said he was leaving the ticket because he was convinced that Cahill could not win and that his presence in the race would only help to reelect Patrick. Loscocco had initially angled to become Baker’s running mate before he was rebuffed and then picked up by Cahill.

The Republican complaint to the Ethics Commission requests an investigation into whether Cahill’s campaign “illegally coordinated with state employees’’ and used taxpayer resources for the benefit of his campaign. The complaint points to a recent ad purchase for the state Lottery, which Cahill oversees as state treasurer. The ads highlight the money the Lottery generates for cities and towns.

“Coordination between political campaigns and state officials and utilizing state resources to benefit a political campaign is illegal,’’ Nathan Little, executive director of the state GOP, said in the letter.

Andrew Ryan, Frank Phillips, and Eric Moskowitz of the Globe staff contributed to this report.