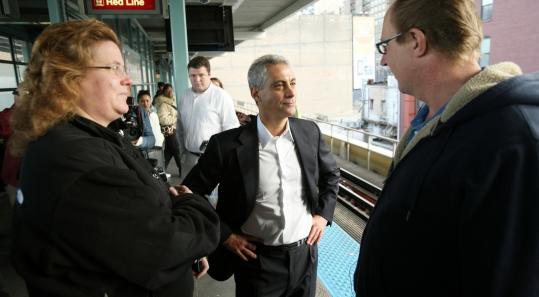 WASHINGTON — Intending to talk about colleges and worker training, President Obama suddenly found himself yesterday in a spirited, election-year debate with a business advisory group about whose tax cuts should be extended and for how long.

At a meeting of the President’s Economic Recovery Advisory Board, Harvard economist Martin Feldstein pressed Obama to keep all the Bush-era tax cuts, not just the middle-class cuts the president wants to extend.

“That would give a boost to confidence,’’ Feldstein declared. William Donaldson, chairman of the Securities and Exchange Commission, added that an extension would allay business and consumer uncertainty.

Obama replied that his stand would benefit 98 percent of American taxpayers. “You’d think [that] would provide some level of certainty,’’ he said.

Obama also reiterated his view that top-income tax brackets would do little to boost the recovery, since the wealthy aren’t holding off on buying flat-screen televisions and other big-ticket purchases for lack of a tax cut. Plus, he said, those tax cuts are unaffordable.

“If we were going to spend $700 billion, it seems it would be wiser having that $700 billion going to folks who would spend that money right away,’’ he said.

Obama dismissed the notion that the well-off — he included himself — would simply “take our ball and go home’’ if they didn’t continue to get a big tax cut.

Congressional Democratic leaders have postponed a vote on tax cut extensions until after the November election, but Obama has accused Republicans of holding middle-class cuts hostage by demanding top-end cuts, too.

Much of the meeting was devoted to an administration initiative, “Skills for America’s Future,’’ that would expand partnerships between top US companies and community colleges. It was announced on the eve of a White House summit on community colleges, which is being led by Jill Biden, a community college educator and Vice President Joe Biden’s wife.

Former White House chief of staff Rahm Emanuel hit the campaign trail yesterday and got a sudden taste of the vastly different agenda he would face as Chicago’s mayor — and the hurdles he must overcome to be elected.

A day after unveiling his campaign on a new website, Emanuel hit the streets, vowing to “hear from Chicagoans — in blunt and honest terms’’ what they want from their next mayor. Many were happy just to shake hands, exchange hugs, or drink coffee with President Obama’s hard-charging former right hand man.

But he also faced skepticism about his intentions, loyalties, and whether he even has the legal right to run to lead a city he hasn’t lived in for nearly two years.

Skeptics and well-wishers alike greeted Emanuel as he campaigned at a downtown train station, a South Side restaurant, and along Pilsen’s busy 18th Street.

Outside Izola’s restaurant, a bastion for Chicago’s black leaders, a fair number of curiosity seekers said they had never even heard of Emanuel.

Inside, treated to a $13 breakfast with Emanuel, a trio of local men told him their concerns — unemployment, education, crime.

“He’s going to have to convince us he’s going to make a difference,’’ said diner Paul Bryson, 46, a bathroom remodeler.

Connecticut rivals trade barbs in debate over TV ads
HARTFORD — The two candidates for the state’s open US Senate seat took aim at each other’s recent TV ads in their first face-to-face debate last night, with Republican Linda McMahon saying her position on the minimum wage has been misconstrued and Democrat Richard Blumenthal saying the latest criticisms about his military record are nothing new.

The matchup, broadcast on live television, was feisty at times, with McMahon, a former wrestling company executive, accusing the longtime Democratic attorney general of being on the government payroll for all his adult life, not understanding what it takes to create jobs, and misrepresenting her stance on minimum-wage rate levels.

McMahon said Blumenthal’s latest ad makes it sound as though she supports cutting the current rate level — a question she was asked about by reporters last week but didn’t directly answer.

“That’s a lie. You know that’s a lie. I never said it,’’ McMahon said, calling on Blumenthal to pull the ad.

Blumenthal also accused McMahon and her company, , of accepting $10 million in state tax credits while laying off 10 percent of its workforce. He said it was another example of McMahon putting profits above people, a common refrain for his campaign.

McMahon and Blumenthal are hoping to fill the seat now held by Senator Chris Dodd, who is retiring.

Hours before the debate, McMahon released a TV ad featuring clips of Blumenthal appearing to suggest he served in Vietnam rather than stateside as a member of the Marine Reserve. Shown a video of the ad, which features him saying he served “in’’ Vietnam when he actually served stateside with the Marine Reserve, Blumenthal said during the debate the accusation was old news.

“I regret it. I take full responsibility for it,’’ he said. “It was not intentional.’’