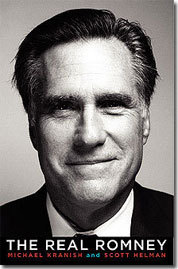 This book is the first complete, independent biography of Mitt Romney, a man whose journey to national political fame is at once remarkable and thoroughly unsurprising.