Two cousins, two countries: A family split in half 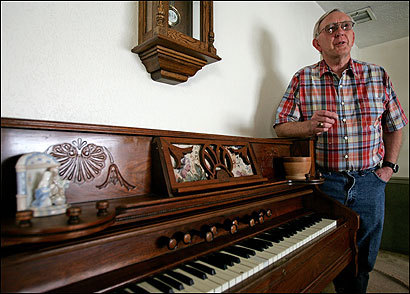 COLONIA JUAREZ, Mexico—Mike Romney, a school administrator in this small town in the Mexican desert, and Mitt Romney, a candidate for president of the United States, have never met.

But the two distant cousins are just a year apart in age, and both are descendants of the same great-grandfather, Miles Park Romney, who fled the United States and, at the direction of church leaders, helped create this colony 122 years ago as a refuge for polygamous Mormons.

The distance between the lives of Mike and Mitt Romney underscores the little-known story of how the Romney family split in two on a fateful day 95 years ago, when Mexican revolutionaries forced most Mormons to leave the colony. Mike Romney's family quickly returned to Mexico, after the threat passed, while Mitt Romney's family stayed in the United States.

Mitt Romney, who has never visited the colony, has tried to distance himself from the polygamous part of the family's history.

"They were trying to build a generation out there in the desert and so he took additional wives, as he was told to do," Mitt Romney said during an interview on "60 Minutes" that aired May 13. "And I must admit I can't imagine anything more awful than polygamy."

Mitt and Mike Romney are great-grandchildren of Miles and his first wife, Hannah. Miles married four other women and fathered 30 children.

Mike Romney, asked recently about his cousin's statement on "60 Minutes," said he wasn't offended, explaining, "Our end of the family has lived with this. Those who left and went to the United States left this area and they kind of left it behind."

In fact, all these years after Mitt Romney's ancestors left this golden-hued 5,000-foot-high valley, this neatly ordered town is filled with reminders of the Romney heritage. To walk the streets here - and in the neighboring Mormon colony of Dublan - is to walk in footsteps of Miles Park Romney, Mitt Romney's great-grandfather, who led settlers here; his grandfather, Gaskell, who helped build this town; and his father, George, who left here as a 5-year-old.

[George Romney's Mexican birth led to questions during his 1968 presidential bid about whether that disqualified him for the White House, given the constitutional mandate that a candidate be a "natural born citizen." When Mitt Romney was asked about this on C-Span, he said that his father concluded that he was allowed to seek the presidency because "his parents were citizens." George's parents, Gaskell and Anna, were born in Utah but lived for years in Mexico until fleeing for the United Sates during the Mexican Revolution.]

Mike Romney, who at 59 is one year younger than Mitt, has the sun-worn face of a man who has spent his life in the high desert of Mexico. Inside his modest home, pictures of great-grandparents Miles and Hannah hang on the wall, and the living room is dominated by Hannah's well-worn organ, which the matriarch insisted accompany the family on their travels through the Southwest and Mexico so that the Romney children would not be starved for culture in the desert.

Within this remote valley, a four-hour drive south of the United States border along mostly desolate roads, Mike Romney is revered for his role as a leader in his family, town, and church. He speaks with a soft and certain eloquence, making it possible to imagine that - if not for a twist of family fate 95 years ago - it could have been him running for the presidency. He stresses that he thinks his cousin would make a great president.

As Mike Romney traveled with a visiting Globe reporter and photographer around Colonia Juarez, pointing out sites where his great-grandfather and wives lived at various times, he said it was inevitable that Mitt Romney would be asked about polygamy. Mike Romney said he often talks to visiting Americans and is astounded by their misconceptions about the Church of Jesus Christ of Latter-day Saints.

"I've really gotten an appreciation about how little people know about the L.D.S. Church and the misconceptions that are out there about it," Mike Romney said. "There are so many people out there who believe we still live polygamy." He said he expects Mitt Romney to be asked about the issue because "after all, your great-grandfather had this many wives."

Mike Romney said Miles made sure that polygamy "was done correctly. ... Miles Park Romney's wives, to my knowledge, got along as well as, if not better than, most other families. They did well. Were there problems? Yes. It would always be difficult for two women to share one man, or three or four [wives]. That is something that in this time and age we really don't understand. I don't understand it fully. But I know it was part of their belief, they lived it righteously, and they made the best of the circumstances, and when it was over, it was over. And I think to some degree, there was some relief it was over. It is something that is not practiced in the church today, but it is part of our history, it is part of who we are, it is part of the church that took place. I think it is fair question."

But the question must be put in proper perspective, Mike Romney said. He does not want his deep pride in ancestors who settled the colony to be confused with support for a marriage practice that was abandoned by the church in 1890.

"I don't want to be judged on my ancestors, which we are," Mike Romney said. "At the same time, Mitt is who Mitt is because of his ancestors. His foundation of belief, his integrity - those things were instilled in him with his heritage. You can't get away from that."

As he looks at what his great-grandfather accomplished, Mike Romney said all family members can take pride.

"Miles Park was a pioneer in every sense in the world," Mike Romney said. "He helped form part of the United States, he helped form part of Mexico. He was faithful to his church, he was faithful to his God, he was honest in his dealings. He was a good man, and I don't know what more I could ask." Michael Kranish can be reached at kranish@globe.com.