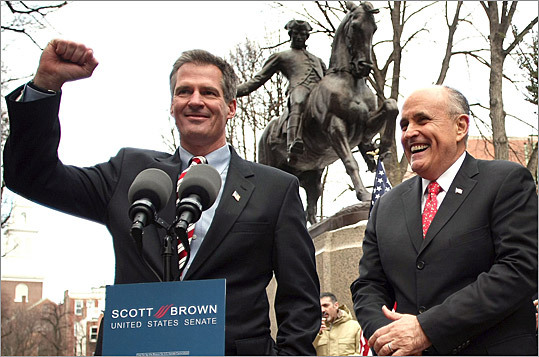 Rudy Giuliani and Scott Brown arrived in the North End, and the crowd parted.

This pair of Republican stars - Giuliani, the former mayor of New York, and Brown, the suddenly ascendant GOP Senate hopeful - soaked up every last bit of the adulation.

“I’m used to being here with winning candidates,’’ Giuliani said, citing his visits to Boston for Republican governors such as Mitt Romney and William Weld. “I like campaigning here because, frankly, they feed me.’’

Giuliani is hoping to christen another victor this time, his presence yesterday underscoring the sudden national interest in Tuesday’s special US Senate election between Brown and Democrat Martha Coakley, the state’s attor ney general.

Several hours later, Coakley was surrounded by heavyweights from her party, with state and national Democrats seeking to rouse voters with red-meat attack lines portraying Brown as out of touch with Massachusetts and the future.

Clinton, who is helping lead American relief efforts for Haiti, which has been ravaged by an earthquake, cast his dueling responsibilities yesterday as “two sides of the same coin’’ because they both illustrate the need for good governance.

Coakley, referencing a Brown TV ad showing him campaigning around the state in his GMC truck, drew a roar when she said, “Just because you’re driving around in a truck doesn’t mean you’re going in the right direction.’’

Coakley’s campaign rally, coming as polls indicate a tight race, drew an assortment of Democratic operatives, elected officials, and fans of the former president. The free event was held in the glitzy Grand Ballroom.

“For eight years, he was George Bush’s yes man, and now he wants to go to Washington and become [Senate Republican leader] Mitch McConnell’s no man,’’ Kerry said. “We’re not going to let it happen.’’

Democrats spoke in dire terms about the prospect of losing a Senate seat to a Massachusetts Republican for the first time since 1972, in a bid to galvanize the state’s Democratic Party establishment ahead of Tuesday’s vote.

“The voting here is going to determine the balance of power in America,’’ Kerry said

“We have a fight on our hands,’’ said Governor Deval Patrick. “We’re fighting . . . the same folks who made the mess we’re in.’’

After the event, Coakley and Clinton were whisked away in a motorcade to Worcester, where they held a similar rally in a packed hall at Worcester Polytechnic Institute. The raucous crowd turned quiet as Clinton assailed Brown as an agent of obstruction whose election would enable the Republicans to block health care legislation through a filibuster.

Brown’s appearance in the North End was less scripted. His supporters hoisted homemade signs with slogans such as “It’s our turn for a change’’ and “Had enough yet?’’

Giuliani told the crowd gathered on Hanover Street near a statue of Paul Revere that like Paul Revere, who “woke up the people of Massachusetts and New England,’’ Brown can “wake us up’’ and “send a signal and a very dramatic one that we are going in the wrong direction on terrorism and we have to change it and change it now.’’

Giuliani said Brown recognizes that terrorists should not be treated “like a bunch of common criminals,’’ and tried in civilian courts in New York; Coakley supports the Obama administration plan to try some terrorism suspects in US courts. Giuliani also attacked Coakley for suggesting that terrorists had left Afghanistan.

“What the heck does she think we’re doing there?’’ he said. “She refuses to acknowledge she was wrong. Look, I can understand making a mistake. But the worst thing you can have in a public official is not just ignorance but stubbornness.’’

Democrats pointed out that Brown, when he was a state representative, was one of only three lawmakers who voted against a bill that provided financial assistance to Red Cross emergency workers, including those who had volunteered in the recovery efforts after the Sept. 11, 2001, attacks. Brown’s campaign said yesterday that the state was in a fiscal crisis at the time and couldn’t afford the expense.

Coakley also blasted Brown yesterday for not supporting President Obama’s proposal for $90 billion in new fees on the nation’s largest banks, as a way to recoup a portion of the taxpayer money spent on the economic bailout. She cast Brown as being beholden to bank CEOs who contributed to the economic collapse, rather than to average taxpayers and small businesses.

“While they decide whether bonuses should be six figures or seven figures, Main Street is still struggling,’’ Coakley said in an interview. “Let’s be clear: I stand with Main Street. . . . It should be clear to voters that I stand with them, with taxpayers - not with big CEOs looking to line their pockets.’’

Brown responded that any additional fees would just be passed on to consumers.

“With all due respect, that money is going to be transferred down to the individuals through ATM fees, increased fees,’’ Brown told reporters.

“There’s only one candidate in this race who’s a tax-cutter,’’ Brown added. “And it’s not Martha Coakley.’’

Brown also charged that he is the victim of a smear campaign orchestrated by Coakley and the Democratic “machine.’’

“With all due respect, I thought Martha was better than that,’’ Brown said. “It shows young people like my kids that dirty politics is still alive and well. And folks, it’s me against the machine.’’

The Democrats, Giuliani asserted, are stunned by the closeness of the race. They “in a million years couldn’t believe we are where we are now. Massachusetts belongs to them. They own Massachusetts. Let’s have Massachusetts send a signal that Massachusetts is once again independent.’’

After the rally, Brown and Giuliani campaigned through the North End, strolling along Hanover Street and stopping for photos and handshakes. Boston Firefighter Eric Logan held his 19-month-old son Eric Jr. while snapping photos of Brown and Giuliani with his cellphone.

“These are pictures of the next senator,’’ he said.

Gawkers and well-wishers emerged from the coffee shops and Italian restaurants that line the street. Cheers of “Brown’’ erupted when a brown UPS truck emerged from a side street. The candidates shook every hand offered. A woman with a small terrier searched for a marker so Brown could autograph the dog’s overcoat.