This Kennedy wants to cut government

Senate candidate not related to clan 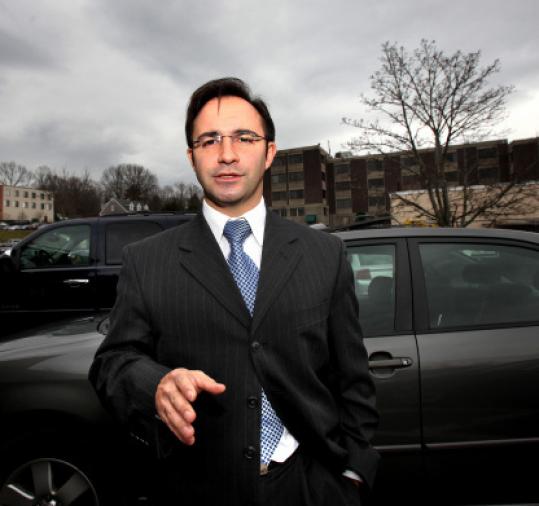 "We’re going to do everything we can to make sure people know I’m Joe Kennedy from Dedham," Joseph Lewis Kennedy says of his Senate run. (Michele McDonald for The Boston Globe)
By Matt Viser Globe Staff / December 18, 2009

His campaign headquarters are in his home. No one on his campaign staff works full time, and he cannot afford to pay them anyway.

He can hardly believe he’s on the ballot himself.

Meet Joseph Lewis Kennedy, who wants to be your next US senator.

Kennedy, a 38-year-old information technology executive from Dedham, is waging a quixotic independent bid for the seat that became vacant when Edward M. Kennedy (no relation) died in August. He is an active Libertarian and advocates a diminished role for the federal government.

Kennedy’s candidacy, once thought to pose a possible problem for the Democratic nominee simply because of the political appeal of his name, has been seized on for strategic advantage by Coakley and is now a potential thorn in the side of Brown.

Coakley has sought to legitimize Kennedy, suggesting that she will not participate in debates that do not include him, in an apparent effort to raise his profile to ensure that voters know that this is a Kennedy who has no relation to the famed political family.

Kennedy’s candidacy has been the hot topic in the early stages of the Jan. 19 special election, largely overshadowing any discussions of Afghanistan, health care, and domestic economic policy.

Coakley said she wants people to get to know Kennedy so they are not confused. She said he should be included in debates because his name will be on the ballot.

“This is a fresh start,’’ Coakley said in an interview. “Scott won a primary. I won a primary. Joe Kennedy’s on the ballot. The voters . . . should have an equal opportunity to see what the candidates are all about.’’

Brown said in an interview that Coakley’s discussion of Kennedy is a strategic effort to distract voters. “It’s time that she stops avoiding,’’ he said.

“I have to be honest with you,’’ Brown said, when asked about Kennedy’s candidacy. “I don’t know anything about him. I didn’t know until this weekend that he was even on the ballot, so I’ve been focusing on what I’m doing and not really worrying about what other people do.’’

And who exactly is Joseph L. Kennedy?

Kennedy starts with the basics: He is not Joseph P. Kennedy II, the former congressman and nephew of the late senator, who decided not to run for US Senate.

“There are people in this state that love the Kennedys, and there’s people that don’t,’’ Joseph L. Kennedy said in one of several interviews with the Globe this week. “But we’re going to do everything we can to make sure people know I’m Joe Kennedy from Dedham.’’

Kennedy was put into foster care when he was several days old. He spent much of his childhood in Worcester, graduated from Clark University, and is now running for US Senate because he says neither major political party represents those who, like him, seek a sharply diminished role for the federal government.

“Every single time I’ve looked at Democratic or Republican candidates, I just see two sides of the same coin,’’ Kennedy said in an interview. “They’re both willing to take our liberties, they continue their war mongering, and they’re forgetting about the one thing that keeps us great, the economy, jobs, and our freedom.’’

He said his biggest political heroes are Thomas Jefferson and Benjamin Franklin, but his contemporary idol is US Representative Ron Paul, a Texas Republican and 2008 presidential candidate.

His voting record in recent years is spotty. He appears to have skipped almost all state and local elections, as well as presidential primaries, over the decade. Town clerks contacted by the Globe could find records of his participation in elections only in 2000, 2008, and this year. Kennedy says he voted in the last three presidential elections: for Al Gore in 2000, because he preferred his stance on the environment, for George W. Bush in 2004, because he did not want to oust a president in wartime, and for Bob Barr in 2008, because he is a Libertarian. In the state’s special Senate primary last week, he took a Democratic Party ballot and said he voted for City Year cofounder Alan Khazei, who finished third.

Kennedy collected more than 18,300 signatures, nearly 14,000 of which were validated, to qualify for the special election ballot. Kennedy said about 10,000 signatures were gathered by paid signature collectors.

Kennedy was born in Boston in 1971, to a couple he has never met, but he says one of his parents was Portuguese and one Puerto Rican. He was put into foster care as an infant with a couple named Kennedy, the husband a Lutheran minister, and the wife an office manager at the Lutheran Healthcare Center of Worcester. They adopted him when he was about 4 years old.

Raised partly in Worcester and partly in Ridgefield, Conn., he attended Clark University, where he majored in computer science and played rugby. He has spent much of his career in information technology and is a vice president at He is also the founder of Tomorrow for Today, a nonprofit group that aims to help solve energy and environmental problems by teaching children about science and technology.

Kennedy said he has never been married and has no children of his own; he lives in Dedham with his girlfriend and her 10-year-old daughter.

He said his central beliefs are that states should have more rights and that there should be less control by federal policy.

The most important issue right now, he says, is jobs and the economy. And he thinks that Republicans missed an opportunity when they were in power and that Democrats have not done enough over the past year of their control.

“It might sound like this is an unbelievable, daunting task,’’ he said. “But I’ve done more than anybody . . . thought.’’

Michael Levenson and Eric Moskowitz of the Globe staff contributed to this report. Matt Viser can be reached at maviser@globe.com.