Brown hopes issues give him an opening 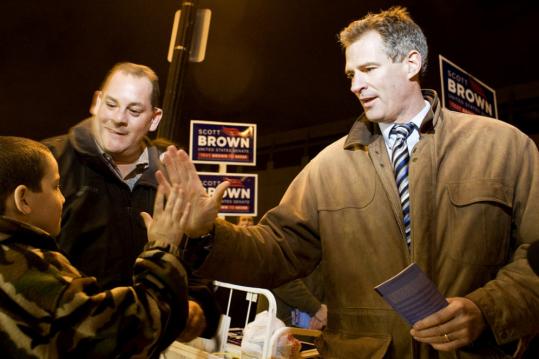 On paper, the special US Senate election next month should be another walkover for the Democrats. Yet the race for the seat of the late Edward M. Kennedy will play out not on paper, but in a noxious political environment, providing a rare glint of hope for the state’s undermanned Republicans.

Brown, a Republican state senator from Wrentham, is considered a long shot, but he is the GOP’s most attractive Senate candidate since Mitt Romney lost to Kennedy 15 years ago.

His positions on most issues are diametrically opposed to those of the Democratic nominee, Attorney General Martha Coakley of Medford. The sharp contrast on issues, Republicans hope, will generate enough news media attention to help offset Brown’s weaker fund-raising and field organization.

With only 33 days until the Jan. 19 special election, the campaigns will try to establish the most favorable context in which to debate the vast differences on so many issues.

Democrats are confident their candidate has the upper hand.

“Martha Coakley has every advantage that she had in the Democratic primary,’’ said Mary Anne Marsh, a Democratic strategist. “And now, she’s even better known, more well liked, and has a bigger organization. . . . People don’t know Scott Brown. He doesn’t have the money, organization, or the time to be successful.’’

Republicans have not won a US Senate race in this state since 1972 and are outnumbered better than 3 to 1 in voter registration. And yet, until Democrat Deval Patrick’s victory in 2006, the GOP had held the governor’s office for 16 years after bouncing back behind William F. Weld in 1990. Republicans often liken the current political climate to the voter anger of 1990.

To win statewide, however, the GOP generally needs to capture the votes of more than two-thirds of independents, who constitute 51 percent of the Bay State electorate. The Republican will also need to peel off some conservative and moderate Democrats, particularly in blue-collar areas where turnout was unusually light in the Democratic primary, which featured four candidates.

To do that in such a short contest is a difficult task, especially in a campaign with the distractions of the holiday season, and a vote in the dead of winter, which may keep turnout low.

A possible complication for Brown is the fact that Joseph L. Kennedy of Dedham - a Libertarian running as an independent, who is not related to the late senator - has submitted sufficient signatures to be on the Jan. 19 ballot. Libertarians tend to appeal to a segment of the Republican electorate.

Both campaigns say they believe that a full airing of the candidates’ differences on issues will help their causes, and it is clear that the Democrat will try to nationalize the debate and the Republican will try to conflate national and state issues, particularly on fiscal and tax matters on the heels of a series of increases in state taxes.

Flashpoints will emerge, but the battleground in the race is potentially enormous because Coakley and Brown disagree on virtually every significant issue.

“We are focused on talking about Martha’s record and the fact that Republican Scott Brown would bring us back to the policies of the Bush-Cheney administration, which got us into this economic mess in the first place,’’ said Alex Zaroulis, a Coakley spokeswoman.

“People underestimate how intensely voters feel about the issues of taxing and spending,’’ said Eric Fehrnstrom, a Brown adviser. “It’s hard for voters to differentiate between what’s happening in Washington and at the State House in Massachusetts, because for them it all means government is out of control and it’ll cost them in the long run.’’

In other words, Coakley will try to tie Brown to national Republican figures who are held in very low esteem in this state, and Brown will try to tie Coakley to a Democratic “machine’’ that now holds power in both Washington and on Beacon Hill.

Here are just a few of the differences between the major party nominees.

■Health care overhaul: Coakley favors the Democratic plan with a “robust public option,’’ a government plan to compete with private insurers as a way to reduce costs. Brown, who voted for the Massachusetts overhaul plan in 2006, opposes the public option and generally the Democratic plans on the table, which he says will subsidize increased coverage in other states at the expense of Massachusetts, which covers nearly all residents now.

■Immigration: Coakley supports a path to citizenship for undocumented immigrants now in the country. Brown believes they should apply for citizenship, return to their native land, and wait their turn.

The campaigns are still wrangling over the terms and number of debates, but Coakley, Kennedy, and Brown signed on this week to at least two debates: a radio debate on WBZ Newsradio’s NightSide with Dan Rea on Monday ; and a WBZ-TV debate scheduled to air Dec. 27 on WBZ-TV, and Dec. 28 on WSBK-TV.

Brown and Kennedy have also confirmed for a Jan. 8 debate on WGBY-TV in Springfield and a Jan. 13 debate that is being sponsored by the League of Women Voters of Massachusetts and held at Boston’s Faneuil Hall. Coakley has not yet agreed to those.

Coakley started the six-week final campaign with less than $500,000 in her campaign account, compared with about $300,000 for Brown. Coakley, however, has access to a large national fund-raising network through EMILY’s List, the abortion rights advocacy group that supports Democratic female candidates. Moreover, she is likely to receive help from her three vanquished primary opponents, who among them raised more than $5 million.

Brown has struggled to raise funds and conserved his money during a primary race in which he was outspent by his opponent, Jack E. Robinson, whom Brown trounced by nearly 80 percentage points. The Republican nominee has little hope of receiving direct financial help from the National Republican Senatorial Committee, which is stockpiling cash for assaults on vulnerable Democrats next year and to defend GOP seats that are threatened.

During the primary, Brown aired only a smattering of radio commercials that did little to raise his profile across the state. By contrast, Coakley ran five weeks of heavy television advertising across the state and finished the campaign with high favorability ratings.

“We’ll be outspent, but we’ll have enough for a broadcast media buy,’’ Fehrnstrom said of Brown’s campaign. “Money’s important, organization’s important, but this is a message campaign.’’

Zaroulis said the Coakley campaign would “have a robust advertising program’’ but would not say when it will air spots.

But the GOP’s Kaufman said there is an opening for his party. “Our side is motivated right now, and in a special election, you have to be motivated,’’ he said. “It’s still a hill to climb, but it’s a hill, not a mountain.’’

Matt Viser of the Globe staff contributed to this report. Brian C. Mooney can be reached at bmooney@globe.com.