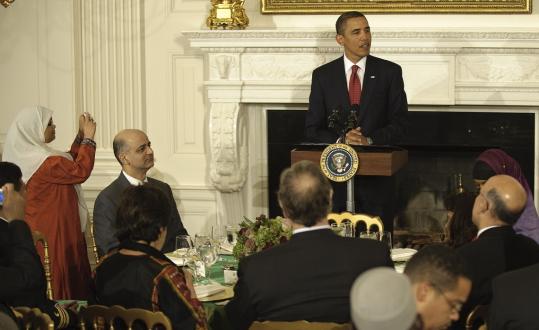 President Obama addressed his guests at a dinner last night at the White House to celebrate the Muslim holy days of Ramadan and highlight the contributions of American Muslims. (Jim Watson/AFP/Getty Images)
September 2, 2009

President Obama’s job approval rating is at the lowest point of his presidency - a drop largely caused by erosion in support among the political independents who gave him an electoral landslide, a new poll suggests.

The CNN/Opinion Research Corp. survey results released yesterday show his overall approval number at 53 percent, down from 76 percent in early February, just after he took office.

The increasingly bitter partisanship appears to be taking a toll on the president.

Majorities now disapprove of Obama’s handling of the economy, health care policy, taxes, the federal deficit, and Medicare. He still gets majority support for his handling of foreign affairs, race relations, terrorism, and Afghanistan.

The White House announced late yesterday that Obama, just back from a week on Martha’s Vineyard (though interrupted for Senator Edward M. Kennedy’s funeral), will leave for Camp David this morning for more rest and not return until Sunday.

Obama praises Muslims at dinner for Ramadan
President Obama praised the contributions of American Muslims last night at a dinner to celebrate the Islamic holy month of Ramadan. “The contribution of Muslims to the United States are too long to catalog because Muslims are so interwoven into the fabric of our communities and our country,’’ Obama said at the iftar, the dinner that breaks the holiday’s daily fast.

The president joined Cabinet secretaries, members of the diplomatic corps, and lawmakers to pay tribute to what he called “a great religion and its commitment to justice and progress.’’

Obama shared the story of Bilqis Abdul-Qaadir, an invited guest, who broke a state record for most career points as a Massachusetts high school student. “As an honor student, as an athlete on her way to Memphis, Bilqis is an inspiration not simply to Muslim girls - she’s an inspiration to all of us,’’ he said.

Obama has made it a point to reach out to the Muslim world as president, giving a high-profile speech in Cairo, and issuing a video message - all to emphasize shared values and to make clear that Islam is not America’s enemy.