THIS STORY HAS BEEN FORMATTED FOR EASY PRINTING
Three to see 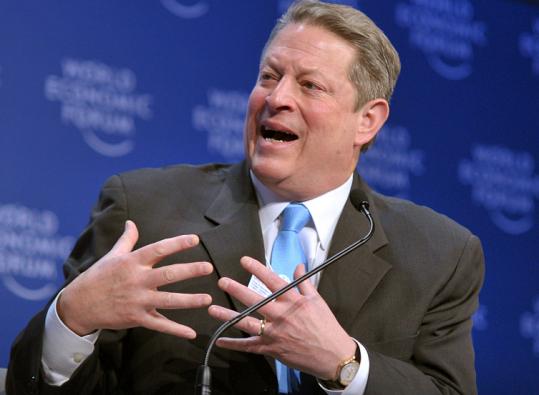 Think of this as Al Gore's victory tour.

For eight years Gore has been on the sidelines watching George W. Bush run the country, a role that was almost his. Gore, you'll recall, was the Democratic presidential nominee who won half a million more votes than Bush in the 2000 election, but fell just short in the decisive Electoral College. The final outcome was in doubt for weeks, until deadlocked Florida slipped over to the Bush side of the scales with help from some hanging ballot chads and a 5-4 Supreme Court ruling along ideological lines. (Still, anyone who's convinced that forces of darkness never would have let Gore win should remember that Florida wouldn't have mattered if he'd won his home state, Tennessee.)

Gore had campaigned on a platform of sweeping environmental regulations, a limited military, broader health care, and continued hefty taxation on the wealthy, all stances that proved at odds with administration policies in the ensuing years. But this winter's inauguration of Barack Obama means new life for the concerns that Gore championed. So even though he's not in the White House, his values are.

Frankly, the intervening years have been good to him in other ways. Science generally has borne out his early concerns over global warming. His dogged quest for environmental awareness led to his best-selling book "An Inconvenient Truth," as well as an Academy Award-winning documentary of the same name, and, topping it all, the Nobel Peace Prize in 2007.

Besides being inextricably linked to the environment, Gore also is a longtime technophile. While in the US Senate, he pushed hard for a more powerful Internet (no, he didn't really claim to have invented it), and these days he is both a senior adviser to all-powerful Google and a confirmed user of Twitter. (A recent texting sample: "The Antarctic is warming," plus a Web link.) Gore was right years ago that technology was, and is, on the march. To find out what else is on his mind, you can hear him next Monday at 8 p.m. in Boston's Wang Theatre, the latest stop on a short speaking tour. There are admission charges.

FIFTY, BEING NIFTY
Harvard sociologist Sara Lawrence-Lightfoot has been probing the risks and joys of life after 50. The result is her new book, "The Third Chapter," which she'll discuss at 7:30 p.m. tomorrow at the First Parish Church, 3 Church St., Harvard Square, Cambridge.
IT'S THE ECONOMY
Governor Deval Patrick faces questions on the economy from Massachusetts residents on Thursday at the John F. Kennedy Library, Columbia Point, Dorchester. The session starts at 7 p.m., but guests should arrive by 6:30, since it's being televised on NECN. To reserve a seat, log on at www.jfklibrary.org.