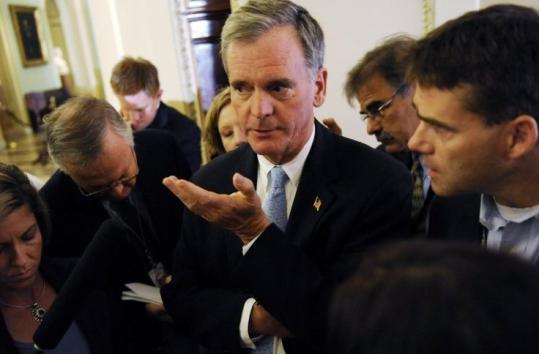 WASHINGTON - Senator Judd Gregg, the New Hampshire Republican who said yesterday that he is under consideration to be secretary of commerce, has emerged as an unlikely ally of President Obama on economic policy at a time when many GOP members are condemning the president's approach.

Gregg and Obama come from starkly different personal and political backgrounds, and they barely knew each other during their four years together in the Senate because Obama was "always campaigning," Gregg said in an interview this week. But both have spoken about trying to rise above partisanship and appear to have bonded in recent weeks as they grapple with how Washington should respond to the deepening recession.

Gregg was one of only six Republicans to support releasing the second $350 billion for the financial bailout, and one of 10 members of his party to support the nomination of Treasury Secretary Timothy Geithner. He is viewed as a potential key player in attracting GOP support in the Senate to Obama's economic recovery plan, which passed the House this week without a single Republican vote.

At a private meeting with Republicans earlier this week, at which Obama laid out his rationale for the stimulus, Obama lavished praise on Gregg's proposal for a bipartisan commission that would examine the cost of Social Security and other programs.

Afterward, Gregg was fairly gushing with his own praise for Obama, saying in an interview that Obama's presentation was "reassuring" and "really was a tour de force because of his depth of knowledge."

Gregg, the senior Republican on the Senate Budget Committee who has strayed from the party line on some fiscal issues, said he wants to help the Obama team reshape the stimulus bill to gain Republican support.

Throughout the week, Gregg was on the phone with Geithner, White House economic adviser Lawrence Summers, and others in an effort to reshape the bill and bring Republicans into the fold. Gregg said he wants the bill modified to help prevent home foreclosures, a measure that Obama has separately supported, and he wants some spending measures eliminated.

White House officials said yesterday that no final decision has been made on the Commerce post. Whether or not Obama picks Gregg for the job, the week's events made clear that Obama has identified him as one of his most important potential Republican allies. That could be helpful to Gregg if he remains in the Senate and seeks reelection in 2010, in a state that has become much more Democratic in recent years.

Gregg, 61, a former governor and son of a former governor, has been in elective office since 1979, the last 16 years in the Senate. If Gregg did leave the Senate, his replacement would be named by the state's Democratic governor, John Lynch. Although the governor is unpredictable - he picked a Republican for attorney general - New Hampshire Republicans are aghast at the possibility that Lynch would replace Gregg with a Democrat and that the party would lose a second US Senate seat in three months.

Gregg is the only Republican representing New Hampshire in Congress. In the last five years, the state GOP has lost the governor's office, both houses of the Legislature, the Executive Council, both congressional seats and, last November, the Senate seat held by John E. Sununu.

James Merrill, a Republican lawyer and strategist from Manchester, said he has been working with Gregg to organize an upcoming fund-raiser in Washington for his 2010 reelection bid and had heard nothing until Thursday afternoon, when reports of the Commerce post surfaced, about the possibility of Judd leaving the Senate.

"Unless there's some deal in place, I can't envision Judd Gregg resigning his Senate seat and allowing Governor Lynch to appoint a Democrat," he said. "If Judd Gregg felt he could serve his country this way, and a deal was struck to appoint a Republican to replace him for the remainder of his term - maybe. But I find it hard to believe."

Some political observers suggest that Lynch may be willing to appoint a moderate Republican, one who would promise not to run in 2010. In addition to appointing several Republicans, Lynch has regularly provoked his party by making allies across the aisle - going so far last year as to endorse an incumbent Republican state senator over a veteran Democratic state representative challenger, and, once, to show up at a Republican state Senate fund-raiser.

But Lynch is also a cautious politician who often waits until the last possible moment to state his view on an issue or bill, and many believe he wants to serve a fourth two-year term.

Appointing a Republican would infuriate his party, said 11-term state Representative Daniel Eaton of Stoddard, a top Democrat. "Anyone that he's counted on as a friend on Democratic side, in the next two years, he would not be able to count on," he said.

David Carney, a GOP strategist based in New Hampshire who was George H.W. Bush's White House political director, said he saw little chance that Gregg is cutting a deal with Lynch, or that Gregg would want to play up his alliances with the new administration to score political points with Democrats.

"The guy is not a wheeler-dealer, not a games player. He is a straight shooter," said Carney. "He has lots of gravitas and doesn't do things on a lark or see what he can leverage."

If Gregg is replaced by a Democrat and Al Franken is declared the winner of the Minnesota Senate race, Democrats would have 58 seats, plus independents Joe Lieberman of Connecticut and Bernie Sanders of Vermont, who usually vote with the party.

That would give them 60 votes, enough to potentially stop Republican filibusters.

While Gregg is known as a fiscal conservative and a Republican Party stalwart, he has broken with his party on some key issues. Most notably, last year he opposed President Bush's plan for $600 tax rebates, arguing that it would do little to stimulate the economy. After the checks were mailed, Gregg conducted hearings and concluded that his complaint was on target.

Gregg said he similarly doubts whether Obama's plan for $500-per-worker tax rebates would be effective, but he said he would not oppose them if they are part of an effective overall package.