THIS STORY HAS BEEN FORMATTED FOR EASY PRINTING
HONORING DR. KING 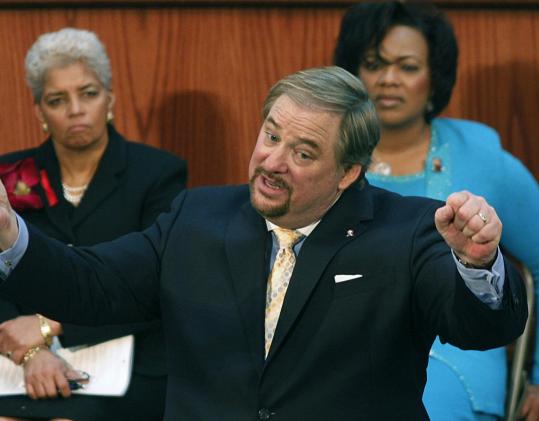 ATLANTA - Speaking yesterday at the church where the Rev. Martin Luther King Jr. once preached, Rick Warren, the pastor chosen to give the invocation today at President-elect Barack Obama's inauguration, urged the crowd to follow King's example of service and selflessness.

"Tomorrow when I pray the invocation for my friend, Dr. King and a whole host of witnesses will be shouting," Warren said in the sanctuary of Ebenezer Baptist Church, packed with about 2,000 people with dozens left outside.

"Martin Luther King was a mighty tool in the hand of God. But God isn't through. Justice is a journey, and we're getting further and further along."

The selection of Warren, who opposes same-sex marriage in his home state of California, was controversial for both events. Obama's decision to give Warren a role in the inauguration sparked protests from the gay community and the National Organization for Women. At the Atlanta service, about 100 protesters gathered across the street, and there was an outburst from at least one critic before Warren addressed the audience.

Isaac Newton Farris, president of The King Center, defended its choice of Warren as keynote speaker, saying that his stances on issues like global warming, AIDS, and poverty are in keeping with King's ideals.

"Warren is not so easy to pigeonhole as your average conservative," Farris said.

Audience member Margarette Towner, a resident of Stockbridge in Atlanta's southern suburbs, said she enjoyed Warren's message and was only vaguely aware of the controversy surrounding him.

King preached at Ebenezer from 1960 until his death in 1968, and a service commemorating his birthday and life are held there annually. On election night, the mainly black audience there was moved to tears when news networks announced that Obama had won the presidential race.

"There is definitely a spiritual connection between these two events," Farris told the mostly black congregation that erupted in applause at any mention of Obama's name.

Though Obama's election to the nation's highest office is a milestone, King's final achievement will not be complete until disparities in healthcare, education, and economics are eliminated, he said.

"The dream was not about an individual or any race of people attaining power," Farris said. "It was a human dream."