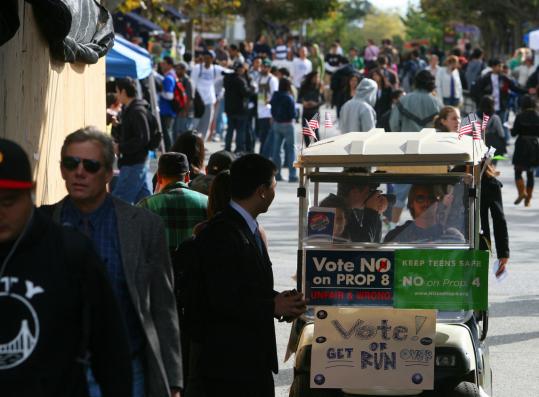 BERKELEY, Calif. - The hundreds who massed at the University of California on election night responded to Barack Obama's victory by heading off on a route that has been for a generation the sacred way for the activist left: out the campus gates, through Sproul Plaza, and down Telegraph Avenue toward People's Park.

By the time they arrived at the intersection of Telegraph and Durant avenues, where a tie-dyed vendor occupies one corner, it became clear they did not come to challenge the system now preparing to consecrate a new regime in Washington. At one point, a man scaled a lamppost and unfurled the Stars and Stripes. The crowd broke out in the national anthem.

"People finally felt like our generation had reclaimed patriotism," said Haley Fagan, 24, a Berkeley paralegal who got stuck in a car trying to cross the street as the crowd surged. "It was a moment that we felt comfortable with it."

After generations of finding their voice in dissidence, some on America's left wing are adjusting not only to a new, postelection comfort with patriotic symbols, but the political reality they represent. Believing in Obama after inauguration day will mean identifying with the machinery of American power.

"There's a left-wing tradition of being systematically opposed to the US government, knee-jerk reactionary - most of our presidents have made it fairly easy to do," said Jo Freeman, author of "At Berkeley in the Sixties," a memoir of her student activism. "Those who view everything the US does as automatically suspect already have a problem doing that with Obama."

At Berkeley, the university has, quite deliberately, chosen to host its first-ever large-scale observance of a presidential inauguration in a spot most closely identified with its radicalism, said Chancellor Robert J. Birgeneau. At Sproul Plaza, site of the self-described Free Speech Movement protests beginning in 1964 - now commemorated with a monument declaring "this soil and the air space above it should not be part of any nation and shall not be subject to any entity's jurisdiction" - students will gather around giant television screens to take in the nation's most solemn ritual.

"It will be a patriotic celebration," Birgeneau said in an interview. "That small circle will now be surrounded by a lot of students who are happy to be members of a nation that just elected its first African-American president."

Not since Franklin Roosevelt turned the federal government into an aggressive agent of liberalism - pushing the New Deal at home and confronting fascism abroad - has the left felt such a deep attachment and invested such hopes in a head of state.

"People in the '30s felt that for once the government was on their side," Pulitzer Prize-winning Berkeley historian Leon F. Litwack said in an interview. "They had never had that kind of relationship to a president before."

Disagreements with American foreign policy, particularly in Vietnam, fueled a cynicism about American might and its trappings, said Litwack. He has written in praise of Free Speech Movement leaders for "eschewing the conventional flag-waving, mindless, orchestrated patriotism. . . . They defined loyalty to one's country as disloyalty to its pretenses, a willingness to unmask its leaders, and a calling to subject its institutions, government, and wars to critical examination, not only the decisions made by rulers but often their indecision."

Such a view of patriotism was so hardened in Berkeley - where, after the Sept. 11 terrorist attacks, the Fire Department removed flags from its trucks for fear that they could become targets of antiwar demonstrators - that a gathering of College Republicans made the front page of the Los Angeles Times in 2003 for walking down Telegraph waving flags and singing "America the Beautiful" as a sardonic provocation.

A similar, if earnest, display on election night "did strike me as funny and ironic," said Mark Rudd, who organized campus protests in the 1960s as a national leader of Students for a Democratic Society. "For the last eight years - and probably for much longer - most radicals have been mourning for our country. . . . Obviously the empire is not going to fall overnight, but at least there's been a popular vote that changes the direction of the last 40 years."

The Star Market, a small Berkeley grocery with a robust selection of legumes, recently posted next to its cash register a letter to the editor of the San Francisco Chronicle imploring readers to fly the Stars and Stripes on the day of Obama's inauguration. "In recent times, our flag has been displayed more by one side of the political spectrum than the other," wrote Paul Templeton of Berkeley. "Let's rescue it from unreflective, knee-jerk patriotism."

Such spontaneous patriotism was the reaction to Obama's victory for many in neighborhoods where displays of Tibetan nationalism had been more common than its American equivalent. Election-night revelers in Harvard Square sang "The Star-Spangled Banner." Those in West Philadelphia chanted "USA.!" A celebrating mob in Manhattan's Union Square screamed, "This is what democracy looks like," emptied of the sarcasm that made it a favorite refrain of anti-globalization protestors.

"I think part of the new patriotism of the left is a function of folks recognizing how much certain things mattered to them - the Constitution, due process, separation of powers, basic legal and human rights - once they have been taken away, or at least radically threatened," said Jeremy Varon, a Drew University historian and editor of "The Sixties," a scholarly journal.

"We are used to alienation, but Bush has engendered an alienation so profound it has nearly shattered many of us and called us to defend core aspects of our polity that we thought were sacrosanct," Varon said. "Election night was the cathartic undoing of all that: a way to say, in Whitman-esque communion with our national identity, 'We too sing America!' "

In a photo now on the front of his website, folk singer Richie Havens stands before a large flag outside his New Jersey polling place, giving a thumbs-up after voting. Havens, 67, said he is excited to see Obama sworn in, but that the change in government is merely catching up with the democracy of popular culture.

"We are probably the first country in the world getting the chance to formalize our change," Havens said.

There are signs that Obama's success not only increased voter turnout, but has made citizens more interested in being part of government. His transition office has reported that more than 300,000 people have submitted r??sum??s via the Internet for federal jobs. A study this year by Harvard's Institute of Politics showed that about one-third of those between 18 and 24 were interested in joining a national, state, or local bureaucracy.

"These students are optimists," said Tufts President Lawrence S. Bacow, who on election night watched students march by his house on campus singing "God Bless America" and "America the Beautiful." "They don't have an idealistic view of the country. At the same time, I don't think they're cynical in the way prior generations were cynical."

As opposed to the largely upper-middle-class white students who propelled the 1960s counterculture, leftist students today are more likely to come from working-class and immigrant backgrounds and see college as a route into the middle class, according to Birgeneau.

"They don't come here as radicals who are going to overturn the system," said the UC-Berkeley chancellor. "These students want to be successful. They seem to have realized that working within the system is the way to do so. The Obama victory is evidence to them that that works."

At Obama's inauguration on Jan. 20, many who have, in the past, used such occasions to rambunctiously question American power are likely to be silently saluting its transfer.

"They've already got the permits," said Freeman, who joined anti-Bush protests at his 2004 inauguration but expects to be in Washington this time as merely a spectator. "But I'm going to be looking forward to seeing what the signs say."