Case against Ill. governor a liability for Obama aide

Blagojevich has a shared history with Emanuel 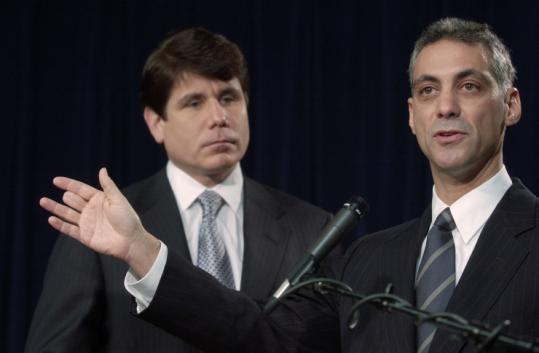 CHICAGO - Governor Rod Blagojevich is legendary in Illinois political circles for not picking up the phone or returning calls, even from important figures like the state's senior senator, Dick Durbin.

But there was always one call Blagojevich regularly took, his aides say, and that was from Rahm Emanuel, his congressman, his one-time campaign adviser, and more recently - and troubling for Emanuel - one of his contacts with President-elect Barack Obama's transition staff.

The rapport Blagojevich and Emanuel shared over the years has suddenly become a troubling liability for Emanuel and the new president he will serve as chief of staff.

Emanuel and Obama have remained silent about what, if anything, Emanuel knew of the governor's alleged efforts to peddle Obama's vacant Senate seat to the highest bidder.

Emanuel did contact the governor's office about the appointment and left Blagojevich with the impression that he was pushing Valerie Jarrett, a close Obama friend, so he wouldn't have to compete with her in the White House for Obama's attention, said a person close to Blagojevich. The person requested anonymity because the person was not authorized to talk about the governor's discussions regarding the vacancy.

It was not clear whether Blagojevich inferred Emanuel's motive for advocating Jarrett, or whether Emanuel discussed the appointment with Blagojevich directly or with John Harris, the governor's then-chief of staff, who also is charged in the case, according to the source.

Emanuel's refusal to discuss the matter publicly, and the few comments offered by Obama to date, have prompted questions about Emanuel's ties to Blagojevich and what fallout he will face as the criminal case unfolds, although sources have said he is not a target of prosecutors. Even so, any hint of scandal for Emanuel threatens to tarnish Obama's promise of new political leadership free of scandal and corruption.

Obama has said he will release a full accounting of his transition staff's interaction with Blagojevich and his aides over his Senate replacement once he receives the OK from prosecutors sometime this week. Until then, Obama has said it would be inappropriate for him or his aides to comment further.

Prosecutors refer in the 76-page complaint to the governor's discussions on FBI tapes about a "president-elect adviser," believed to be Emanuel, but they do not specifically cite contacts with Emanuel or anyone on Obama's transition staff.

Instead, the taped conversations reveal Blagojevich telling others to float his idea by the president's adviser of forming a nonprofit that he hoped would, with Obama's help, receive millions of dollars that the governor could tap later.

Blagojevich said he didn't want the idea associated directly in conversations about the Senate appointment or filling Emanuel's House seat, according to the complaint. However, Blagojevich is quoted as saying "I want it to be in his head" for later discussions about Emanuel's successor.

It was Blagojevich who, seemingly out of nowhere, yanked Emanuel into his scandal when answering reporters' questions the day before his Dec. 9 arrest, invoking his name in an apparent attempt to shrug off any perception of wrongdoing.

He said he wasn't concerned about a report in the Chicago Tribune that confidant and former aide John Wyma's cooperation had helped lead federal prosecutors to tape the governor's conversations.

Blagojevich said he's "always lawful" whenever he speaks, and he was confident Wyma has been "an honest person who's conducted himself in an honest way. That's the John Wyma I know and it's the John Wyma that Rahm Emanuel knows and a lot of other people know."

Blagojevich is right. Wyma does have ties to both him and Emanuel, those close to both have said. And Wyma's clients contributed to both - more than $100,000 to Emanuel's campaigns and causes, and more than $445,000 to Blagojevich's, according to campaign finance records reviewed by The Associated Press.

Wyma and his attorney, Zachary Fardon, did not respond to interview requests.

Emanuel's defenders say he is hardly an ally of Blagojevich.

"They were in different worlds personally and politically," said Peter Giangreco, a political consultant on Blagojevich's 1996 congressional campaign and his two gubernatorial races. "They only dealt with each other because they occupied the same political geography."

Emanuel's effort to promote Jarrett or anyone else for Obama's vacant Senate seat was more a part of his new job description and less a reflection of close ties, Emanuel's supporters have said.

But there was more to their relationship than a polite acquaintance. The two share a political past, rooted on Chicago's North Side, and a friendly relationship - although not a close friendship - that made Emanuel the obvious choice to push Obama's preferences to fill his vacant Senate seat, current and former Blagojevich aides said.