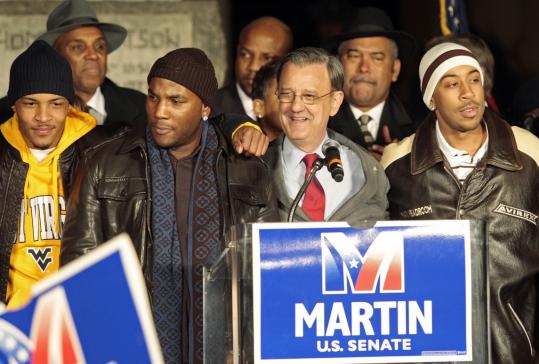 Jim Martin, the Democrat vying for the US Senate seat in Georgia, posed with rappers (from left) T.I., Young Jeezy, and Ludacris during a campaign rally in Atlanta. (Dave Martin/Getty Images)
By Sasha Issenberg Globe Staff / December 2, 2008
Text size – +

ATLANTA - Jim Martin, the Democrat trying for the second time in a month to unseat Republican Senator Saxby Chambliss, was standing in one of Barack Obama's old campaign offices the other day, circled by a staff paid for with Obama's dollars, facing a large banner bearing Obama's image.

The postcard-sized handbills stacked around the room were old door-knockers printed to promote the Obama-Martin ticket, crudely cut in half for their new purpose. "For President," some of them still read, in Obama's familiar Gotham typeface.

"I have a little bit more help than I did before," Martin said with a little smile. The longtime state legislator and former human resources commissioner, who waged a lackluster campaign for lieutenant governor two years ago, carried the unsettled air of someone who had been pushed by an unexpected inheritance into flashier digs than he ever expected to call his own.

Today's runoff election between Martin and Chambliss will offer the first test of whether Obama is able to bequeath more to local allies than merely the trappings of a presidential campaign. The results may offer a tentative answer to questions that will ghost American politics for at least the next four years: Is there a sustainable Obama coalition, and is the Obama machine durable? Has Obama created anything greater than himself?

"He has a political army that is truly impressive, but that kind of loyalty to a person rather than to an institution is not as transferable," said Donald Fowler, a former Democratic National Committee chairman. "Yet this is a new day and this is a new kind of organization: it is highly electronic and it might work."

For Democrats, the election has a far more urgent meaning: a victory here - along with one in Minnesota, where the votes in a disputed race are being recounted - would give them 60 members of the Senate, a supermajority that could block a Republican filibuster.

As a result, a state that floated all year on the periphery of Obama's political map has found a central place in his future - and Martin supporters are presenting the vote as a way for Georgians to ratify an Obama governing majority even before he takes the oath of office in January.

"After he kisses his wife," said Donna Brazile, a Democratic strategist who came to Atlanta last week on Martin's behalf, "then he's going to turn around and look who has his back."

Yet Obama has been ambivalent about meddling in the race. He has recorded a radio ad and robocalls on Martin's behalf, but has shied away from a more visible role: he has yet to appear in a television ad or appear with Martin at an event, even as Georgia Democrats have begged him to do so.

In 1992, facing a similar situation, President Clinton traveled to Georgia just weeks after his victory to support Democrat Wyche Fowler (who later lost).

"Bill Clinton made no great boast of being bipartisan, of having a new approach to politics," said Fowler. "Obama has made it clear he intends to govern in a bipartisan fashion . . . The public might interpret his going down to campaign in a very partisan run-off as forsaking his pledge to be bipartisan."

Where southern Democrats have long worked to convince voters of their distance from the national party, Martin is cloaking himself in as much Obama as he can find. He is running ads with footage of Obama's victory address in Chicago, and has begun interpolating lines from Obama's speeches into his own.

Dozens of Martin field offices are hand-me-downs from the state party's coordinated committee working on behalf of the Obama-led ticket, and are staffed by 100 workers from the Obama payroll - a number expected to double by today ballot - imported from around the country.

It seems both candidates are struggling to mobilize their base. African-American voters, who typically constitute about 25 percent of the total votes in Georgia elections, made up 23 percent of those who participated in the state's three-day early-voting period this week, compared with nearly 35 percent of the early voting before the Nov. 4 ballot.

During one lunch hour this week at an early-vote location in a county government building in downtown Atlanta - where lines snaked outside a month ago - only a couple of the two dozen available touch-screen machines were being used at any time.

"It was like one hundred times busier. Maybe one thousand times," said a poll worker.

"We are directing our efforts to getting people who already voted out to the polls again," said Dwayne Marshall, a Martin staffer who runs an office at Morris Brown College in Atlanta, one of several historically black institutions that surged for Obama (he won the surrounding precinct 710 to 1). "What we do know is the record early-vote turnout shows how committed people were."

Chambliss, a first-term Republican who beat Martin by nearly 110,000 votes but was forced into a runoff because neither candidate received a majority, has welcomed the new focus on the race's national implications.

One reason Chambliss failed to clear the 50 percent threshold, local analysts say, was that many Georgia Republicans voted for a Libertarian candidate to protest the incumbent's support for an immigration reform compromise and a financial services bailout.

"Most of those people don't want 60 votes for the Democrats, so they'll either sit it out or they'll go vote for Saxby," said Erick Erickson, a former Republican political consultant in Macon who edits the conservative blog Redstate.

"That'll do as much for our base as it will for his," said Martin spokesman Matt Canter.