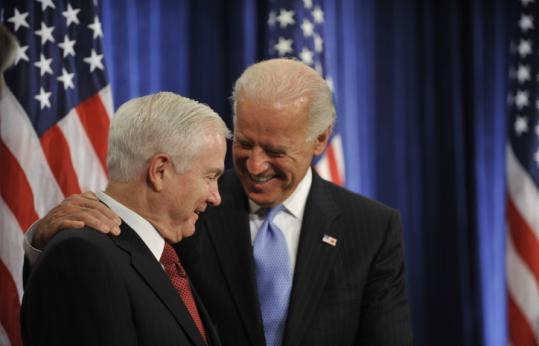 WASHINGTON - The members of President-elect Barack Obama's national security team come from diverse backgrounds - a Republican defense secretary, a former Marine general, and his principal rival for the Democratic nomination - but they all agree on one major point: The war in Afghanistan is the central front in fighting terrorism.

In naming his top national security advisers yesterday, Obama affirmed his campaign pledge to withdraw combat forces from Iraq and turn America's attention to defeating Al Qaeda and rolling back the Taliban in Afghanistan and Pakistan. He reiterated his view that most combat troops should be out of Iraq in 16 months.

"What this signals is a transition period in which our mission will be changing," Obama told reporters in Chicago as he introduced his top picks for diplomatic and security posts. "We will have to remain vigilant in making sure that any terrorist elements that remain in Iraq do not become strengthened as a consequence of our drawdown. But it's also critical that we recognize that the situation in Afghanistan has been worsening."

He added that "the safe havens for terrorists that have been established there represent the single most important threat against the American people."

A number of foreign policy analysts and activists said that Obama has selected a strong team to carry out his signature campaign promise. Most analysts agreed that despite the contrasting backgrounds of the security team members, they would not be likely to raise obstacles to his pursuit of that goal because they accept the underlying premise.

All of the key players - including Robert M. Gates, President Bush's current defense secretary who will stay in that role under Obama - have long said they believe that defeating the network that carried out the Sept. 11, 2001, terrorist attacks will require far more resources. And they have recognized that resources that have been in short supply due to the war in Iraq, where the United States has nearly five times the number of troops.

Michael O'Hanlon - a senior fellow at the nonpartisan Brookings Institution, a Washington think tank - said, however, that the security Cabinet's commitment to the war in Afghanistan will be tested if the security situation in Iraq deteriorates and the president and his team are forced to reexamine their assumptions.

"We haven't seen something to test the differences" between Obama's top advisers, he said.

Still, several groups said that Obama's foreign policy personnel choices were a signal that the new president will move swiftly to draw down combat forces from Iraq and to increase the American commitment in Afghanistan.

"Momentum is building - with Obama's new team at its forefront - to give the forgotten front the attention Obama has called for," the National Security Network, a Washington think, said in a report issued yesterday.

Obama's most frequent confidant on security matters is likely to be his national security adviser, retired Marine General James L. Jones. Jones was an outspoken member of the military brass in arguing that the Iraq war has had a negative impact on the fight against Al Qaeda.

When he became NATO commander in 2003, Jones predicted that the Iraq war would be "a debacle," Bob Woodward writes in his book, "State of Denial."

Jones, who oversaw NATO's forces in Afghanistan, also went on television days after leaving his post in late 2006 to say that at least several thousand more American troops were needed there, not a popular position at the height of violence in Iraq.

Obama's nominee for secretary of state, Hillary Clinton, campaigned for the Democratic presidential nomination on a platform that called for redirecting attention from Iraq to Afghanistan.

In a July 2007 speech on the Senate floor, Clinton said: "Our involvement in Iraq continues to erode our position. It has damaged our alliances, and it's limited our ability to respond to real threats."

Even Gates - who as Bush's Pentagon chief might seem an unlikely Obama ally, due to his support for the surge of US troops in Iraq last year - has expressed concern that the fight against Al Qaeda has suffered.

Speaking Sept. 10 of the war in Afghanistan, Gates said: "The war on terror started in this region. It must end there."

Obama struck that note again yesterday. "As I said throughout the campaign, I will be giving Secretary Gates and our military a new mission as soon as I take office - responsibly ending the war in Iraq through a successful transition to Iraqi control," he said. "We will ensure that we have the strategy and resources to succeed against Al Qaeda and the Taliban."

Globe correspondent Jenny Paul contributed to this report. Material from the Associated Press was also used. Bryan Bender can be reached at bender@globe.com.