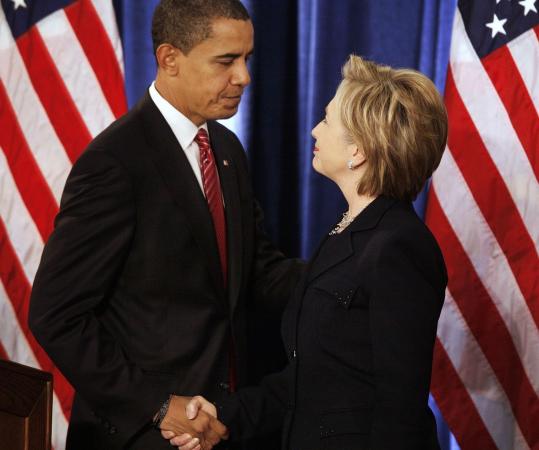 WASHINGTON - President-elect Barack Obama, introducing his high-powered national security team yesterday, promised a "new dawn of American leadership" in the world, in which the United States would usher in an era of global cooperation.

Marking a sharp break from the Bush administration, Obama and his team vowed to focus on diplomacy, not solely military power, to tackle terrorism, end the Iraq war, rebuild Afghanistan, and help other emerging democracies.

"To succeed, we must pursue a new strategy that skillfully uses, balances, and integrates all elements of American power - our military and diplomacy, our intelligence and law enforcement, our economy and the power of our moral example," Obama said at a press conference in Chicago.

While the high-profile names on the team have been known for some time - most notably former political rival Hillary Clinton as the nominee for secretary of state and the current secretary of defense, Robert M. Gates, who has agreed to stay on the job for at least another year - their comments yesterday, one after the other, were striking in pledging a new direction.

"We must pursue vigorous diplomacy, using all the tools we can muster to build a future with more partners and fewer adversaries, more opportunities and fewer dangers for all who seek freedom, peace, and prosperity," Clinton said.

The change in direction, which Obama pledged as a candidate, emphasizes multilateralism and "soft power," influencing nations through diplomacy, humanitarian aid, and democracy building through nongovernmental groups.

"The strongest country in the world can't achieve its objectives acting alone," said Joseph Nye, a professor at Harvard's Kennedy School of Government who is widely credited for the "soft power" concept. "It's going to have to use soft power to attract people to come with us. I think we have a Cabinet that understands that."

Obama acknowledged that his team has several forceful personalities with strong opinions, including Clinton, who had suggested that Obama was not ready to be commander in chief, and Gates, who managed the surge last year of combat troops to secure Iraq and had disagreed with Obama's call for a timetable for withdrawal.

The president-elect, however, said he wants "vigorous debate" rather than "group think" among his top advisers. He declared that his nominees would not have agreed to join his administration - and he would not have invited them - unless they shared his "core vision" for America's role in the world.

"Understand, I will be setting policy as president," Obama said. "I will be responsible for the vision that this team carries out, and I expect them to implement that vision once decisions are made. So as Harry Truman said, 'The buck will stop with me.' "

Indeed, nearly all of his selections echoed Obama's thinly veiled critique of what critics call the Bush administration's aggressive, you're-with-us-or-against-us foreign policy, evidenced by the invasion of Iraq in 2003.

Even Gates, who refrained from criticizing his current boss yesterday, has spoken in favor of diplomacy over military action to achieve America's foreign policy goals. In a speech two months ago at the US Institute of Peace in Washington, Gates reiterated his call for a bigger State Department budget, arguing that "our own national security toolbox must be well equipped with more than just hammers."

Daniel Benjamin - a senior fellow at the Brookings Institution, a Washington think tank - said while Obama's national security lineup is loaded with opinionated, inside-the-Beltway heavyweights, there also appears to be consensus on the need to change the US approach abroad.

"I think that there's a really strong consciousness among all of them and among the broader foreign policy community that we need a great deal of teamwork at home," he said. "The kind of running warfare we saw, particularly between the Defense Department and the State Department in the first Bush term, was such a disaster for American foreign policy and seriously undermined their goals."

After having announced his economic team last week, Obama has now picked more than half of his 15-member Cabinet less than a month after his historic election, a faster pace than recent presidents-elect and a strategy that should enable a quick start when he takes office Jan. 20.

Though Obama has stressed the economy as the recession deepens, a series of deadly terrorist assaults in Mumbai last week that killed nearly 200 people, including at least six Americans, focused new attention on national security.

"The national security challenges we face are just as great and just as urgent as our economic crisis," Obama said, the six members of his national security team arrayed behind him on stage against a backdrop of American flags. "We will renew old alliances and forge new and enduring partnerships. We will show the world once more that America is relentless in the defense of our people, steady in advancing our interests, and committed to the ideals that shine as a beacon to the world."

James Carafano, a senior fellow at the conservative Heritage Foundation, said he was reserving judgment.

"Rewind the tape: All the things being said about Obama's team was said about Bush's team," Carafano said. "A team of all stars doesn't mean they will be an all-star team. What really matters is how do they function as a team. Until they start making policy under pressure, you are just not going to know."

Clinton was, by far, the most-dissected pick; she and Obama waged an epic, sometimes bitter battle for the Democratic nomination and fought hard over national security issues. Obama repeatedly hammered Clinton's judgment for authorizing the Iraq invasion, accused her of being dangerously hawkish on Iran's nuclear ambitions, and belittled her claims to foreign policy credentials on her travels as a presidential spouse. In reply, Clinton portrayed him as naive for offering to meet with leaders of unfriendly regimes without preconditions and aired a hard-hitting television ad suggesting Obama was too inexperienced to handle a middle-of-the-night crisis call in the White House.

Obama dismissed those disagreements yesterday, saying he and Clinton were at odds during the "heat of a campaign" and suggesting that reporters were trying to stir up a frivolous controversy.