THIS STORY HAS BEEN FORMATTED FOR EASY PRINTING
Small-town VIEWS

Voices are muted at crossroads of skepticism, hope

For many, vote boosts doubts; some heartened 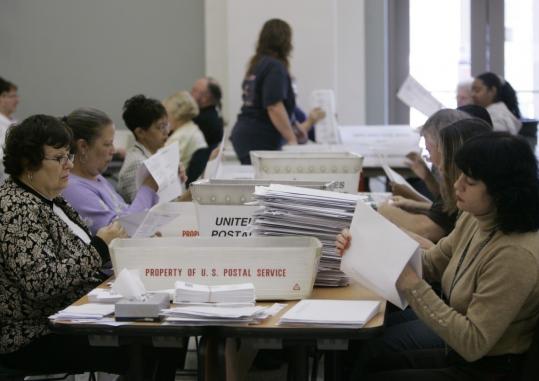 THE COUNT CONTINUES - A surge in voters who used paper ballots on Election Day overwhelmed poll workers in some parts of Ohio, including Columbus, where workers yesterday also sorted through absentee ballots to be scanned. Several large counties could not report results until yesterday, holding up the outcome of a crucial congressional race. (Kiichiro Sato/ Associated Press)
By Brian C. Mooney Globe Staff / November 6, 2008
Text size – +

ASHLAND, Ohio - After Barack Obama's victory Tuesday, the public outpourings of jubilation happened on the television screens, not in the streets, of much of the nation's heartland. In this solidly Republican part of Ohio, the celebrations were small, few, and far between.

On the day after the nation made history by electing its first black president, the reaction of residents of this deeply conservative area was mostly worried or skeptical. Some voters, however, expressed hope for an end to the bitter partisanship that has defined the national political dialogue for so many years and said they will give the president-elect the benefit of the doubt for now.

Even as Obama won statewide 51 percent to 47 percent, Republican John McCain beat Obama 60 percent to 37 percent Tuesday in Ashland County, a rural, economically struggling, and nearly all-white area between Cleveland and Columbus. That was an improvement over President Bush's 31-percentage-point thumping of John F. Kerry here four years ago and part of Obama's incrementally better showing across the state, which flipped Ohio's 20 electoral votes to him.

It's difficult to find an African-American here - the county is 97.5 percent white - but everyone interviewed yesterday professed that race was not a factor in shaping their views of Obama.

Like many parts of the country, Ashland County is bedrock conservative. When he addressed "those Americans whose support I have yet to earn" in his acceptance speech in Chicago's Grant Park, Obama was reaching out to voters such as Aaron Kline, a 30-year-old former Marine and police officer who voted for McCain and doubts Obama can deliver on his promises. Kline, who also operates a small lawn-care business on the side, worries about more taxes.

"If it gets as bad as I think it will, we can change it in four years," Kline said as he left the Home Hardware store in Ashland yesterday.

Another man, walking past the store, was asked how he felt about the election. "It's a bad day, a bad day," he said, throwing his hands up and striding away after declining to give his name.

Bill Smith, general manager of Fin, Feathers, and Fur, a hunting and fishing outfitter in Ashland, said he distrusts all politicians but voted for McCain because, "I don't think Obama brought that much to the table." He even believes Obama could be good for the gun-selling part of his business, at least in the short term.

"People will buy guns before he tries to take them away," said Smith, echoing others' distrust on the gun issue despite Obama's assurances during the campaign that he has "no intention of taking folks' guns away."

But Becky McPike, a school custodian and self-described independent from nearby Nankin, said she agonized until the last minute before voting for Obama because he seemed to have a better economic plan than McCain. "We had to do something drastic, and I thought we should give Obama a shot," she said.

Ashland County, never very affluent, has been hit hard by the mortgage foreclosure crisis and the recent bankruptcy of the Archway cookie factory in the city of Ashland. Burdensome property taxes to pay for schools are crushing the 1,000-plus farm families who are the foundation of the local economy, raising corn, soybeans, oats, and dairy cows.

There are several empty storefronts on West Main Street in Loudonville, a small village amid the scenic hills and canoeing and camping areas at the southern end of the county. One is 5-10 Variety and Craft store, which closed in June after nearly 50 years.

Jane Hollinger, whose husband's family operated the store, voted for Obama, in large part because of the economy. "I was a Republican and I switched," she said.

That canceled out the vote of her sister, Judy Devlin, a retired customer service representative who voted for McCain, partly because of concerns about Obama's relative lack of experience. Race, she said, was never a factor. "He's really not black; he's half-white," she said, adding: "I hope he does a good job for the country."

Several voters said they still had questions and doubts about Obama's background and accused the news media of not delving deeply enough into his past.

Another McCain voter, Maxine Sautter of Bellville, retired from the real estate business, said she could not understand how Obama could become involved with such people as the Rev. Jeremiah A. Wright Jr., whose ranting anti-American sermons were "way out of bounds," and William Ayers, a college professor who was once a leader of the radical Weather Underground in the late 1960s and early 1970s.

"Even if I was in a group they were in, I would not court their friendship in any way," she said.

In Beano's Buckeye Palace, a lively Loudonville sports bar, owner Mike Beans, a highly decorated Vietnam combat veteran, mixes his conservative political views with a love of the Ohio State Buckeyes as he holds court in a colorful, blunt-speaking style.

(He called Obama's pledge to withdraw all US troops from Iraq within 16 months "a bald-faced lie.") And he has some advice for the incoming president if he wants to win the hearts of voters in this Republican stronghold.

"For 12 years, politicians from both parties have been guilty of putting their party ahead of the American public," Beans said. "It has to stop."