In the end, coverage shifted from politics to history 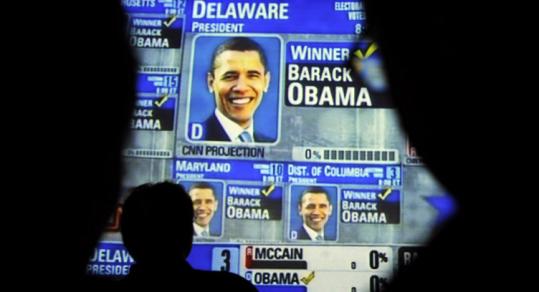 Many MSNBC anchors have forged their reputation this year by speaking kind words about Barack Obama. So it was telling that, in the moments after declaring Obama's victory, the talking heads fell silent. For a while, there was no commentary - just images of elated crowds in Chicago's Grant Park, at a Baptist church in Atlanta, at historically-black Spelman College.

For all the feverish analysis the TV networks have spun in the past hours, days, and weeks, something changed the moment an Obama victory became clear. Across the dial, the rhetoric shifted from politics to history.

On the Fox News Channel, panelist Juan Williams declared that "on some level you have to say this is America at its grandest, the potential, the possibility." And Karl Rove, too, succumbed, "Every American ought to celebrate tonight." On a split screen, a camera panned over the faces - some elated, some amazed - of Obama supporters in Grant Park.

On CBS, correspondent Byron Pitts told Katie Couric that for some black Americans, "there are no words" to describe the emotions of the night. On NBC, Representative John Lewis spoke of "a night of gratitude."

The outpouring at 11 p.m. - when the closing of the West Coast polls made Obama's victory instantaneously clear - felt like a release from an uncomfortable restraint. Throughout the night, every network had shown considerable caution in projecting returns. Even seconds before 11, CNN's Wolf Blitzer, on the verge of declaring Obama the president-elect, was almost absurdly understated. "This is a moment," he said, "that potentially could be rather historic."

Clearly, the lessons of 2000 - when early projections turned out cataclysmically wrong - linger on in news executives' nightmares.

So even as the electoral math became increasingly difficult for John McCain to surmount, the networks replaced giddy projections with an arms race of gizmos.

CNN had its touch-screen electoral map,and more: holographic images of reporters and interviewees (causing anchor Campbell Brown to make a snide reference to "Obi Wan"), plus a stream of odd-shaped graphics that were meant to elucidate exit poll data, but wound up inducing headaches.

Fox News Channel, meanwhile, presented a graphic screen it called "The Launch Pad." NBC had a "virtual reality electoral map studio," in which some graphics rose from a replica of the presidential seal on the floor.

That information and processing power didn't necessarily translate into reporting speed - if speed remains an election-night value. Despite its avalanche of data, or possibly because of it, CNN was the slowest of the cable networks to call states. Brown kept preaching caution as if hewing to a yoga mantra.

MSNBC often called states for Obama before its cable competitors. Well before polls closed anywhere, anchor Keith Olbermann was declaring that journalists in 2100 would be interviewing 2008 voters, by then elderly, about their votes cast for the first black president.

Though Fox was slower to call some races, its panelists telegraphed their own predictions early on. By 8:30, Fox's Bill Kristol, also a conservative columnist for The New York Times, was looking disconsolate.

As the bad news for the GOP wore on, CNN too started waxing poetic about an Obama victory. When Jeffrey Toobin suggested that there was no historic precedent for the way the nation's image would change overnight, panelist William Bennett calmly pointed out that the end of World War II might count.