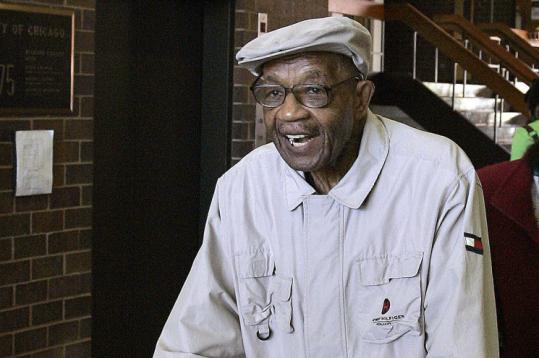 CHICAGO - At age 19, South Side resident Conrad Cochran waited in line to cast his very first vote for William L. Dawson, a ground-breaking African-American politician from the neighborhood who was running for Congress. Forty-five years later, Cochran stood for more than an hour to vote for another exceptional politician who called the South Side home: Harold Washington, Chicago's first black mayor in 1983.

Now, at age 89, Cochran, can barely stand at all; the walker he needs to get around has a built-in seat. On Thursday, however, the retired postal worker was as excited as anyone inside Bronzeville's Martin Luther King Jr. Community Center to vote for Barack Obama, a transplanted son of the South Side. And it didn't matter that he had to wait in a three-hour-long line to do it.

"I've never seen nothing like this," said Cochran, who, because of his age, was escorted to the head of the line by poll workers. "It means change" that's been long in coming, "and now it's finally happening," he said.

The change Cochran referred to isn't from one administration to another, or from one set of policies to another: It's a deeper change that has allowed Chicago's large African-American community - the incubator of many black leaders - to become, for this moment at least, the center of all American politics.

Obama ran for the US Senate from Chicago, and he still lives on the South Side.

The neighborhood has been home to some of the most significant black political figures in American history, including Dawson, a powerful congressman and national leader who advanced African-American causes in the House for nearly 30 years; civil rights activist Jesse Jackson, creator of the PUSH-Rainbow Coalition and a two-time presidential candidate; and Carol Moseley Braun, who in 1996 became the first black woman to win election to the US Senate.

"Only Harlem might have been stronger" in producing black political leaders of national prominence, said Michael Dawson, a political science professor at the University of Chicago and a relative of Dawson, who won his congressional seat in 1942. The city's South Side, Michael Dawson said, "developed black politicians at a level no other state has seen."

For decades, Chicago has occupied a unique place in African-American history, and a high number of nationally-known black entrepreneurs got their start here, from Ebony magazine founder John Johnson to talk-show icon Oprah Winfrey. Black Chicagoans such as Jackson and Nation of Islam leader Louis Farrakhan, both with strong ties to the South Side, led movements that influenced the national agenda.

The political springboard that propelled Obama's astonishing rise to the doorstep of the White House, however, was established on the South Side, decades before his birth in Hawaii.

Historians note that, beginning in the early 1900s, that area of Chicago became a destination for hundreds of thousands of former slaves and their descendants who moved to the Midwest, fleeing Jim Crow oppression and the grinding, hand-to-mouth poverty of the postwar South. Lured by the prospect of good jobs and a more tolerant racial climate, many of them boarded trains, hitched rides, or traveled however they could, following a northbound path that traced the Mississippi River.

Stephanie Davenport, director of educational programs at Chicago's DuSable Museum of African American History, said the migrants found racial hostility and segregation along with jobs in Chicago's factories and foundries. Most of the migrants, she said, didn't have much money and settled on the South Side, which had plenty of cheap, substandard housing.

But the hard times helped forge a strong sense of community and self-sufficiency, she said; segregation gave rise to the city's first African-American doctors, dentists, and attorneys, which in turn helped create the city's upwardly-mobile black middle class. As community leaders began to demand better working and living conditions, Davenport said, "that meant you had to go against the political system" and learn how it worked.

Gradually, South Side businesspeople, community activists, and aspiring politicians began to realize their collective power. White politicians "could see that there were lots of votes here," inspiring trans-racial coalitions, Davenport said. "You had all of this coming together," she said. "And it found a home on the South Side."

Toni Preckwinkle, a longtime alderman who represents the Hyde Park neighborhood in the South Side, said the area has "always had an interesting relationship with national politics," starting with Arthur Mitchell, who was elected to Congress in the 1930s and authored the country's first anti-lynching bill. Dawson, she said, was widely regarded as a kingmaker for judges and up-and-coming politicians - black and white - during his tenure on Capitol Hill, "the person Democrats looked to for recommendations."

The South Side "has produced the preeminent African-American politicians in the country," said Preckwinkle, who was an early mentor to Obama when he moved to the area as a community organizer in the 1990s.

David Axelrod, Obama's chief political strategist and a former Chicago Tribune political writer, was working for the newspaper when Washington ran for mayor in "a very, very ugly election" that broke sharply along racial lines. But Obama carried nearly all of the city during the Illinois primary - including the ones Washington lost. Though it remains to be seen whether other young, aspiring black politicians follow Obama's model and come to the South Side to establish themselves, the signs for the future are good, he said.

"We already elected two African-American United States senators. We've made tremendous progress in Illinois in breaking down some of these old barriers," said Axelrod, pausing between campaign events in Florida during the last week of the presidential race.

"I don't know if it makes it the hub of black politics. Hopefully, if we are successful - and even if we're not - at this point it's fair to say that Obama has helped shatter some old shibboleths and myths and barriers, and I think that will be important," he said.

"But he's not running to be the leader of the black community," Axelrod said. "He's running to be president of the United States."

Scott Helman of the Globe staff , who is traveling with the Obama campaign, contributed to this report.