In Pa. district, wary of Obama, and of McCain attacks

GOP pitch to Reagan Democrats resonates, but will it be enough? 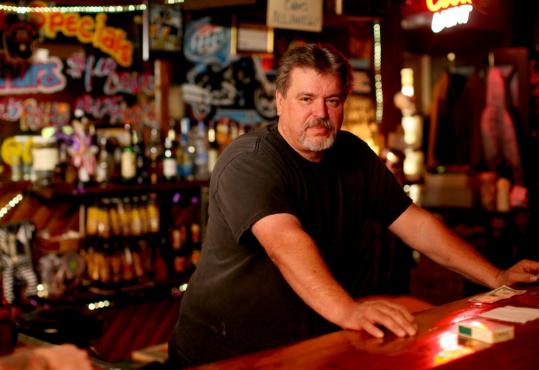 Carl Hrelec, a Democrat who owns a restaurant in Rochester, Pa., said he liked Barack Obama's proposal for a middle-class tax cut. ''The working guy in this country needs a break,'' he said. (Andrew Rush/ Associated Press for the Boston Globe)
By Lisa Wangsness Globe Staff / November 2, 2008
Text size – +

ROCHESTER, Pa. - Carl Hrelec doesn't like the word "liberal." It makes him think of hippies. He does not like the idea of raising taxes on the rich, either - it's not fair, he believes, "to take money somebody has worked for and give it to somebody else who doesn't work."

But as he looked out over the dimly lit restaurant he owns in this once-thriving steel town, he said he liked Barack Obama's proposal for a middle-class tax cut. The Point used to fill with workers from the nearby asphalt and concrete plants. Now, work has slowed, money is tight, and the bar is near-empty some days.

"I don't believe Obama's a socialist," said Hrelec, a 58-year-old Democrat who voted for George W. Bush twice, and who is undecided this year. "The working guy in this country needs a break."

In the final days of the presidential race, John McCain is forcefully arguing that Obama is a liberal tax-and-spender - even a Marxist, he says, quoting the Illinois senator's remark to Joe the Plumber that he wanted to "spread the wealth around." In Beaver County, Pa., a swing district northwest of Pittsburgh teeming with Reagan Democrats, McCain's argument resonates - but perhaps, in this economy, not as strongly as he would like.

In the towns along the hilly banks of the Ohio River, where morning sunshine cast a milky light on the late foliage last week, communities are still struggling to re invent themselves a generation after the collapse of the steel industry here. Voters tend to be right-leaning on social issues and uncomfortable with the idea of increasing taxes on anybody, even the wealthy. But they also remember the days when their towns had a stronger middle class, when good jobs were plentiful, and it wasn't hard for a steelworker with a high school education to own a nice house and a second car.

Such jobs are much harder to find now in Rochester; in the last year a sluggish economy has hurt businesses and slowed construction, and the cost of everything has gone up, said Joe Kaminsky, a 38-year-old self-employed contractor from nearby Monaca, who remembers the days when his father could walk out of one steel mill and find another job at the next mill down the street. Standing downtown the other day, surrounded by abandoned storefronts filled with old junk, Kaminsky was on his way to the Salvation Army to see about getting some assistance during the holidays for his family of seven.

The way voters like Kaminsky see it, wealth has already flowed away from the poor and the middle class toward the rich, and some corrective action is in order.

"I think people are fed up with the Republican point of view - the rich get the breaks and we get the shaft," said Kaminsky, a Democrat who supports Obama.

Even some hard-core Republicans who planned to vote for McCain dismissed his argument that Obama is a socialist, pointing out that many Republicans voted for the $700 billion bailout package.

"You want to talk about socialism, look who's owning the banks," said Dan Rainey, a 60-year-old Republican who works at a sports memorabilia store in Beaver, the thriving and picturesque county seat. He once believed in trickle-down economics. When Ronald Reagan was president it seemed to work, he said. But a bank president "wasn't making $25 million back then, either."

Still, there remains a deep distrust of big government programs here, and strong skepticism about Obama. A number of voters feared he would transfer wealth from the middle class to help people "who don't work" or who don't deserve it.

"For me to pay for someone to have insurance who could pay for it themselves, I'm not into that," said Debby Jurich, a 47-year-old stay-at-home mother from Beaver. "I don't think government should pay for everything."

Pennsylvania's 21 electoral votes are critical to McCain's chances of winning the presidency. Though he is behind in the polls, he hopes to pull an upset by picking up conservative Democrats in swing counties like Beaver, which only narrowly went for John Kerry in 2004.

McCain's focus on casting Obama as the wealth "redistributor in chief" is hard to miss around here these days. In coffee shops and convenience stores, Republican radio ads repeatedly warn that "congressional liberals" want to raise taxes and increase spending by $1 trillion. "They call it taxing the rich; we call it out of touch with our values," the narrator says.

Chris Borick, a political science professor and director of Muhlenberg College's Institute of Public Opinion in Allentown, said his tracking polls for the Morning Call newspaper of Allentown suggest that so far, McCain's argument is not working - voters believe McCain would help the rich while Obama would help the middle class.

The concept of wealth redistribution is as unpopular here as it is in most of America, Borick said, and the notion may play on racist fears of black welfare recipients siphoning money from working-class whites - fears that have special resonance since Obama is black.

But "when your biggest concern is your immediate financial well-being . . . you're not so much worried about what's going to happen on the margin," he said. "You're more worried about the big picture."

Yet this does not mean, he said, that western Pennsylvanians would be comfortable with a Democratic Party that fully embraced old-fashioned liberal ideals. Voters like Hrelec, the restaurant owner, continue to describe themselves as moderate to conservative and prefer a centrist government.

"I would like to see the Democratic Party be more along lines of when JFK was president," Hrelec said. "He wasn't so far to the left. He tried to help the working people in this country, but he didn't punish the rich people, either."

To be sure, there are voters here for whom principle trumps economic self-interest - people who would pay lower taxes under Obama than McCain, but prefer the Republicans' tax policy on the grounds that wealth redistribution is anti-American. Doug Blaker, a contractor in his late 40s, was handing out candy to trick-or-treaters the other night outside the Polish Falcons hall in Ambridge, an ailing former steel town.

"People who came to this country came for a free life," said Blaker, a Democrat who is backing McCain. "If you start taking away some of that freedom, what good is it anymore?"

His friend, Tom Patrician, a 55-year-old Republican and president of the local Chamber of Commerce who now as an independent contractor earns a fraction of what he once made at a union airline job - said a few thousand dollars wouldn't do him much good anyway. He prefers McCain's experience to Obama's.

But in an economy like this one, the success of McCain's argument may hinge less on ideology, and more on whether he can convince voters that Obama's real purpose - as the GOP radio ad implies - is to transfer wealth from the middle class to the poor, rather than from the rich to everyone else.

Kathy Lucci, a 48-year-old saleswoman at a jewelry store in downtown Rochester, voted for Bill Clinton and Al Gore, but she plans to back McCain on Tuesday. She and her husband work hard, she said, and they give generously to the St. Jude Society, the Veterans of Foreign Wars, and virtually every child selling candy bars for school or sports. But it bothers her, she said, when she stands in line to buy hamburger at the grocery store and sees someone using a food voucher to buy steak.

Hrelec disagrees. And as he sat in his quiet restaurant the other day, he seemed much more inclined to support Obama because of his middle-class tax cuts than to spurn him because of his tax hikes for the rich. "I believe they spend more on corporate welfare and bailing bankers out than they give to the needy people in this country," he said.