THIS STORY HAS BEEN FORMATTED FOR EASY PRINTING
CAMPAIGN NOTEBOOK 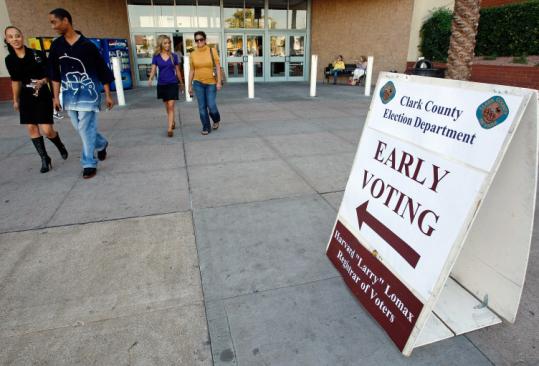 Democrats are leading in early voting in six key states, including here in Nevada, according to statistics from officials. (Ethan Miller/ Getty Images)
October 30, 2008
Text size – +

At issue is a 2003 banquet honoring Rashid Khalidi, a professor of Arab studies at Columbia University and a leading, though controversial, Palestinian scholar. In April, the Times reported about Obama attending the banquet in a story about him dealing with Middle East politics in Chicago. At the event, Obama talked of his personal friendship with Khalidi and his wife, who hosted a fund-raiser for Obama in 2000, saying that his many talks with the couple had been "consistent reminders to me of my own blind spots and my own biases."

The Times reported that while some banquet speakers expressed anger at Israel and US policy, Obama spoke about finding common ground. Obama's views on the Middle East have been much dissected during the campaign; he has declared repeatedly and forcefully that he would defend Israel as president.

McCain and running mate Sarah Palin described Khalidi as a spokesman for the Palestinian Liberation Organization, a characterization he has denied.

Yesterday, McCain suggested - without offering proof - that William Ayers, the leader of a radical group that bombed government buildings during the early 1970s and two decades later served on education reform boards with Obama, attended the same event.

"We should know about their relationship including, apparently, information that is held by The Los Angeles Times concerning an event that Mr. Ayers attended with a PLO spokesman," McCain said on Radio Mambi WAQI. "The Los Angeles Times refuses to make that videotape public. I'm not in the business about talking about media bias, but what if there was a tape with John McCain with a neo-Nazi outfit being held by some media outlet. I think the treatment of the issue would be slightly different."

Palin chimed in at an Ohio rally, "Among other things, Israel was described there as the perpetrator of terrorism rather than the victim. What we don't know is how Barack Obama responded to these slurs on a country that he professes to support."

She added, "If there's a Pulitzer prize category for excellence in kowtowing, the LA Times wins."

The newspaper's editor, Russ Stanton, issued a statement on Tuesday about its decision: "The Los Angeles Times did not publish the videotape because it was provided to us by a confidential source who did so on the condition that we not release it. The Times keeps its promises to sources."

Obama campaign spokesman Tommy Vietor dismissed the issue as a "recycled, manufactured controversy" meant to distract voters. "Barack Obama has been clear and consistent on his support for Israel, and has been clear that Rashid Khalidi is not an adviser to him or his campaign and that he does not share Khalidi's views," Vietor said.

Also, an organization headed by McCain gave at least $448,000 to a group that Khalidi helped start 15 years ago, the Center for Palestine Research and Studies.

Democrats outnumber Republicans among early voters in Iowa, North Carolina, Florida, Colorado, New Mexico, and Nevada, according to statistics from election and party officials in those states. Bush won all six in 2004, and McCain almost certainly needs to win most of them to claim the White House this year.

About a third of voters are expected to vote early this year, up from 22 percent in the last presidential election. More than 15 million voters have already cast ballots, according to statistics compiled by Michael P. McDonald, a political scientist at George Mason University.

But is Democrat Barack Obama, who is using his fund-raising superiority on a massive early voting campaign, merely eating into the number of votes he would otherwise receive on Election Day? Or is McCain, who trails in most polls, falling perilously behind as Election Day approaches?

McDonald said the McCain campaign is digging itself a dangerously deep hole in states the Arizona senator cannot afford to lose. However, he noted that Democrat John F. Kerry led among early voters in Iowa in the 2004 presidential race, only to lose the state to Bush on Election Day.

University investigates hanging effigy of Obama
LEXINGTON, Ky. - University of Kentucky authorities yesterday investigated the hanging of an effigy of Democratic presidential candidate Barack Obama from a tree on campus.

A faculty member said he saw the life-size effigy - with an Obama Halloween mask, a suit jacket, and sweat pants - yesterday morning with a noose around its neck, hanging from a high tree branch. Police immediately took it down.

University President Lee Todd said he planned to apologize to the Obama family on behalf of the school and that he is "personally offended and deeply embarrassed by this disgusting episode."

Secret Service spokesman Ed Donovan declined to comment specifically on the situation, but said an effigy can suggest a threatening tone or be an attempt to intimidate. He said the agency is "very proactive about addressing these matters."

Last month, George Fox University, a small Christian college in Oregon, punished four students who confessed to hanging a likeness of Obama from a tree.