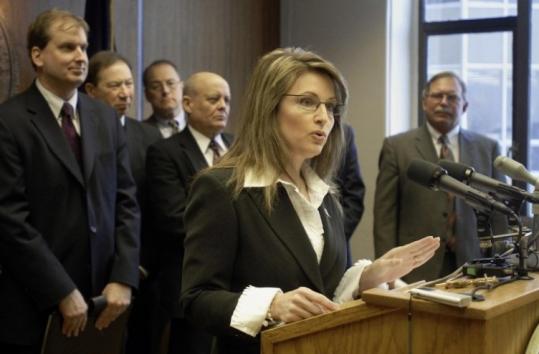 ANCHORAGE - Governor Sarah Palin's signature accomplishment - a contract to build a 1,715-mile pipeline to bring natural gas from Alaska to the Lower 48 - emerged from a flawed bidding process that narrowed the field to a company with ties to her administration, an Associated Press investigation shows.

Beginning at the Republican National Convention in August, the McCain-Palin ticket has touted the pipeline as an example of how it would help America achieve energy independence.

Despite Palin's boast of a smart and fair bidding process, the investigation found that her team crafted terms that favored only a few independent pipeline companies and ultimately benefited the winner, TransCanada Corp.

And contrary to the ballyhoo, there's no guarantee the pipeline will ever be built; at a minimum, any project is years away; TransCanada must first overcome major financial and regulatory hurdles.

In interviews and a review of records, the AP found that:

"Governor Palin held firmly to her fundamental belief that Alaska could best serve Alaskans and the nation's interests by pursuing a competitive approach to building a natural gas pipeline," said Taylor Griffin, McCain-Palin spokesman. "There was an open and transparent process that subjected the decision to extensive public scrutiny and due diligence."

There were never more than a few players that could execute such a complex undertaking - at least a million tons of steel stretching across some of Earth's most hostile and remote terrain.

The pipeline would run from Alaska's North Slope to Alberta in Canada. Secondary lines would take the gas to various points in the United States and Canada.

Building such a pipeline had been a dream for decades. The rising cost and demand for energy injected new urgency into the proposal.

When Palin was elected governor two years ago, she vowed to take on , ConocoPhillips, and BP, the multinational energy companies that long dominated the state's biggest industry.

The new governor tackled the pipeline issue with gusto, meeting with representatives from all sides and assembling her team of experts to draw up terms.

Palin invited bidders to submit applications and offered the multimillion-dollar subsidy. Members of her team say that without the incentive, it might not have received any bids for the risky undertaking.

Palin's team was led by Marty Rutherford, an energy specialist and veteran of state government. What the Palin administration neglected to mention in its announcement of Rutherford's appointment was that in 2003, Rutherford left public service and worked for 10 months at the Jade North, an Anchorage-based lobbying firm. There she did $40,200 worth of work for Foothills Pipe Lines Alaska, Inc., a subsidiary of TransCanada.

Palin has said she wasn't bothered by that past work because it had occurred several years ago.