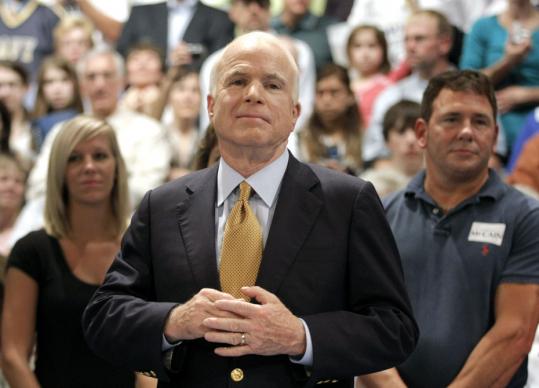 John McCain and Barack Obama have campaigned in Michigan in the past month, but last week McCain's camp said it will effectively cede the state to Obama. (Stan Honda/ AFP/ Getty Images)
By Scott Helman Globe Staff / October 5, 2008
Text size – +

GRAND RAPIDS, Mich. - As Michiganders watch the economic crisis unfold across the country, their reaction is one of knowing empathy: Welcome to the club.

The state's unemployment rate, hovering near 9 percent, has consistently led the nation. The auto industry, which put millions of Chevys and Buicks in driveways and built a middle-class workforce, is a shadow of its former self. Many manufacturing jobs have left and are not coming back.

And things could get worse. The credit crisis has sent new car sales plunging. Workers in Grand Rapids fret about the fate of local tool and die shops. A nearby stamping plant, which employs about 1,500 people, is at risk of closure.

This economic urgency is helping Senator Barack Obama attract voters with his message of change, promises of investments in auto companies and infrastructure, and plans to give tax breaks to companies that invest domestically. Despite lingering doubts about how well he will perform among the state's white, working-class voters, polls indicate that Obama has widened his lead, part of his recent surge in the biggest battleground states.

Michigan has voted Democratic in recent presidential elections, though narrowly. While a win is not ostensibly out of reach for Republican John McCain, who maintains strong reservoirs of support in the state, the environment has become so unfriendly to the GOP ticket that McCain's campaign revealed last week that it will effectively cede the state to Obama. McCain adviser Greg Strimple said Thursday that Michigan looked the "worst" of the battlegrounds, which made it a natural one to "come off the list."

Obama, making his 10th trip to Michigan since June, found receptive audiences last week at one place he would be expected to - on the campus of Michigan State University - and at another place much less hospitable to Democrats - Grand Rapids, a bastion of Gerald Ford Republicans in Kent County, which tends to vote for the GOP presidential ticket by 15 to 20 percentage points, or more.

On a chilly morning last week, Obama filled downtown Calder Plaza with nearly 16,000 people, and he made a point of putting the economic crisis in terms Michigan could understand.

Obama promised to be a president "who understands what it's like to listen to a grown man choke up because he hasn't just lost his job, he's lost his pension, he's lost his healthcare, and he's trying to figure out how he's going to go home that day and explain to his wife and his kids that they're in trouble."

In a departure from his tone toward automakers during the primaries, he repeatedly expressed sympathy for the companies' plight and offered government help - not just loan guarantees but also funding to repurpose factories to produce fuel-efficient and alternative-fuel cars. "We are going to strengthen the auto industry that built the middle class in this state," he said.

It is the kind of message that has won Obama the support of Michigan's labor unions, who are working to mobilize voters on his behalf.

"We've been hurting for a long time," said Ken Brown, a 52-year-old labor activist from Grand Rapids who has been helping his local wholesale and department store union run phone banks for Obama and reach out to members. "It all boils down to the economy."

But questions remain among some white, working-class voters about Obama, who did not campaign in Michigan during the primaries and had difficulty winning that demographic group in other states. Some Obama supporters worry this will be his Achilles' heel.

Macomb County, outside Detroit, gave rise to the term "Reagan Democrats" - blue-collar voters who abandoned the party for Ronald Reagan in the 1980s. A July survey of Macomb County voters by the polling outfit Democracy Corps found dissatisfaction with President Bush, and deep concerns about the direction Michigan was heading - 86 percent said it was headed in the wrong one.

Yet the poll had McCain leading Obama by nine points in a head-to-head matchup, even though no Democrat has lost Macomb County by more than five points since Michael Dukakis in 1988.

For some blue-collar voters in Michigan, Pennsylvania, and other crucial states in the Midwest - Ohio, Wisconsin, Iowa, and Minnesota - McCain still is a better presidential option, whatever the economic conditions.

Mike Niewahner and Dave Horsman are truckers whose routes brought them last week to La Crosse, Wis., where they were having coffee and doughnuts on a loading dock one morning.

"We know the economy is getting bad," said Horsman, 62, of Spring Valley, Minn. "We're not busy anymore."

But both said they will vote for McCain, for reasons that have more to do with social concerns than economic ones. They do not believe Obama is sufficiently supportive of the Second Amendment.

"I'm pretty well set on McCain. He believes the way I do," said Niewahner, a 61-year-old from Toledo, Iowa.

Besides, Horsman said, why lay the blame for the economic crisis solely at the Republicans' feet?

"Democrats have been pretty much in charge, too, haven't they?" said Horsman, who said he has not always voted Republican.

Still, a big reason Obama has such an opening in states such as Michigan is anger at the president and the belief that Republicans have not been good economic stewards.

"I'm tired of losing half of my 401(k)," said Brenda Birchman, a 50-year-old from Portland, Mich., who works in food service at a public school. "I'm tired of the other party busting unions. I'm tired of my friends losing their jobs. I'm tired of seeing those jobs move to Mexico."

"I'm here for all the working class," added Birchman, who came to hear Obama in East Lansing on Thursday.

Brigid Kilpatrick, a 64-year-old retired schoolteacher who came to see Obama in Grand Rapids, said she believes that blue-collar voters who pay close attention to the race will see that he is one who will improve their lives.

"When push comes to shove, they will realize and look very carefully and make the right decision," said Kilpatrick, a self-described Irish Catholic Democrat from Addison, Mich. "But they have to listen."

She added: "McCain - he's not talking about the problems of the people. Obama is."