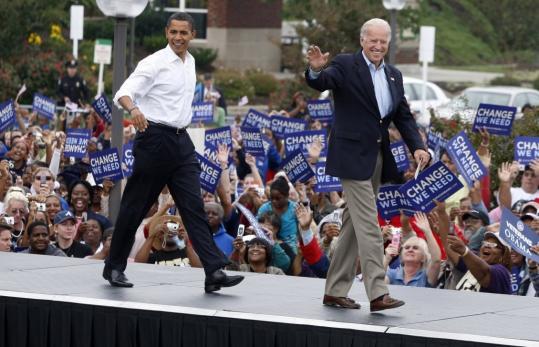 Obama debuted his post-debate attack on McCain with a campaign swing through North Carolina and Virginia, Republican-leaning states where he thinks he can make inroads. He also spoke by phone to Treasury Secretary Henry Paulson, Senate majority leader Harry Reid, and Representative Barney Frank, Democrat of Massachusetts, about the congressional negotiations surrounding the Wall Street recovery deal, according to campaign staff.

But the Illinois senator spent most of the day trying to capitalize on his debate performance by taking McCain to task for not talking about any plans for helping the middle class in the midst of the nation's fiscal crisis.

McCain's campaign suggested yesterday that the Arizona senator had referred to the middle class during the debate when he argued that Obama had voted in favor of higher taxes on families making $42,000 a year and proposed hundreds of billions in new government spending that would place a crushing burden on families and businesses. Obama disputed both of those assertions and said that 95 percent of America taxpayers would not pay more in taxes under his plan.

"If he was honest, Barack Obama knows he was unable to debate the merits of supporting higher taxes on the middle class, and bloated government spending during a looming economic crisis - it simply proved indefensible last night," McCain campaign spokesman Tucker Bounds said in a prepared statement.

"Last night, John McCain's silence on the middle class was deafening," said Biden, a Delaware senator. "We need more than a brave soldier. We need a wise leader."

The Obama campaign tried to back up that point in its newest ad, which also notes McCain never mentioned the middle class during the debate. "McCain doesn't get it," the announcer says. "Barack Obama does."

"We need a president who will fight for the middle class every day," Obama told the cheering crowd.

Senator Hillary Rodham Clinton also campaigned for her ex-rival, saying that Republicans shouldn't be rewarded "for what they have done to our country."

"We cannot turn over our country with these deep deficits, with these serious economic problems, with the international challenges, to the same team that got us into this mess in the first place," Clinton said in Grand Ledge, Mich.