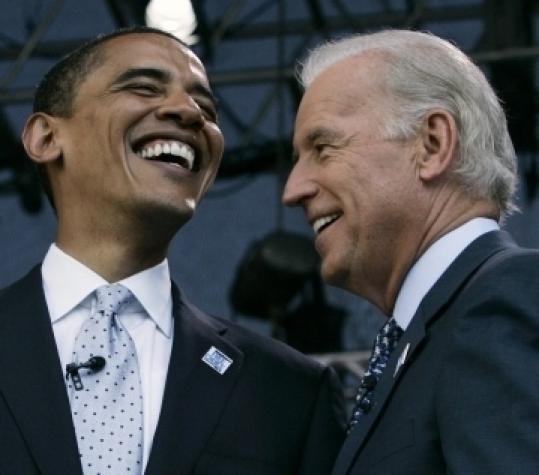 Biden, who has twice sought the White House, is a Catholic with blue-collar roots, a generally liberal voting record, and a reputation as a long-winded orator.

Across more than 30 years in the Senate, he has served at various times not only as chairman of the Foreign Relations Committee, but also as head of the Judiciary Committee, with its jurisdiction over anticrime legislation and constitutional issues.

The official who spoke did so on condition of anonymity, preferring not to preempt a text-message announcement the Obama campaign promised for this morning.

CNN and the also reported early today that Obama had picked Biden.

Obama's campaign arranged a debut for the newly minted ticket today outside the Old State Capitol in Springfield, Ill.

The Democratic National Convention meets next week in Denver to hand Obama his long-sought presidential nomination, and then confirm Biden.

Republican nominee John McCain's campaign early today derided the pairing of Obama and Biden. "There has been no harsher critic of Barack Obama's lack of experience than Joe Biden. Biden has denounced Barack Obama's poor foreign policy judgment and has strongly argued in his own words what Americans are quickly realizing - that Barack Obama is not ready to be president," said McCain spokesman Ben Porritt.

Biden slowly emerged as Obama's choice across a long day and night of political suspense as other contenders gradually fell away.

First Virginia Governor Tim Kaine let it be known that he had been ruled out. Then came word that Senator Evan Bayh of Indiana had also been passed over.

Several aides to Senator Hillary Clinton - who was Obama's closest rival for the presidential nomination - said they believed she also was out of contention. They added that the Obama campaign had never requested financial or other records from her.

Other finalists in the veep sweepstakes were Kansas Governor Kathleen Sebelius and Texas Representative Chet Edwards.

Among those on the short list, Biden brought the most experience in defense or foreign policy - areas in which Obama is rated relatively poorly in the polls compared with Republican Senator John McCain.

Biden voted in 2002 to authorize the Iraq invasion, which Obama opposed from the start. Since then, he's become a firm critic of the conflict and pushed through a resolution declaring that President Bush's troop increase - now considered a military success - was "not in the national interest."

A native of Scranton, Pa., Biden also has working-class roots that could benefit Obama, who lost the blue-collar vote to Clinton during their competition for the presidential nomination.

Biden, 65, was elected to the Senate at the age of 29 in 1973. He entered the 1988 Democratic presidential primary promising to "rekindle the fire of idealism in our society," but he quit the race three months later after he was caught lifting lines from a speech by a British Labor Party leader.

As a two-time presidential candidate, Biden has been well-vetted. "To the best of my knowledge, anything that is embarrassing about my past is pretty well public record," he said in a Los Angeles Times profile last year.

He lives modestly and is among the least affluent members of Congress. For his entire career in Washington, Biden has made a daily 80-minute commute on Amtrak from Delaware, and is, by all accounts devoted to his family, which includes three surviving children and five grandchildren.

Six weeks after his upset victory in '72, Biden suffered a devastating loss when a car carrying his wife and three children was struck by a tractor-trailer truck as they drove to shop for a Christmas tree. His wife, Neilia, and their 13-month-old daughter, Naomi, were killed, and their toddler sons, Joseph R. "Beau" Biden 3d and Robert H. "Hunter" Biden, were critically injured but fully recovered.

Beau Biden, elected attorney general of Delaware in 2006, is a captain in the Delaware Army National Guard. His unit is scheduled to be deployed in Iraq this fall. Hunter Biden practices law in Washington, D.C.

In 1977, Biden married the former Jill Jacobs, who teaches English at Delaware Technical and Community College. They have a daughter, Ashley, who is a social worker.

Brian C. Mooney of the Globe staff contributed to this report.