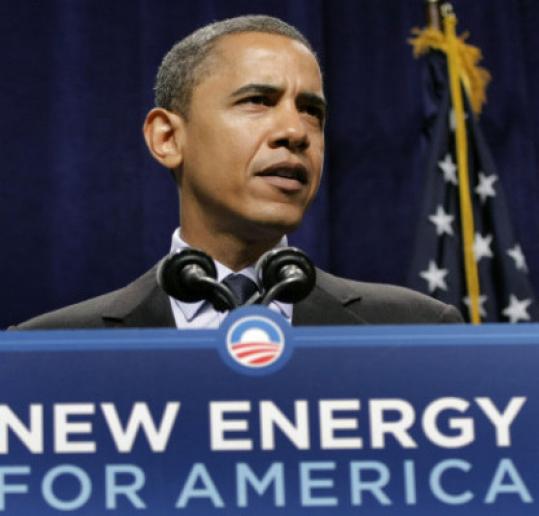 LANSING, Mich. - Democrat Barack Obama put forward a broad energy plan yesterday designed to end US reliance on imported oil within 10 years and shore up his standing amid a tightening White House race and high anxiety over gas prices.

But his proposal includes two significant reversals of positions he has taken in the past, and he immediately drew accusations of flip-flopping from Republican rival John McCain, who has gained ground in the polls using the energy issue.

Obama had steadfastly fought the idea of new offshore drilling and was against tapping the nation's emergency oil stockpile to relieve pump prices that have stubbornly hovered around $4 a gallon.

However, in a major energy speech yesterday, Obama proposed that the government sell 70 million barrels of oil from the Strategic Petroleum Reserve, saying that the move could help drive down gasoline prices in as soon as "within two weeks." Campaign adviser Heather Zichal said he reconsidered his position because "Americans are suffering."

The presumptive Democratic nominee also endorsed long-term work on hybrid cars and renewable energy sources, as part of a "complete transformation of our economy." "Breaking our oil addiction is one of the greatest challenges our generation will ever face," he said.

The Illinois Democrat said US politicians have failed for three decades to deal with the energy crisis and McCain, in Congress for 26 years of that period, has "been part of that failure."

In response, McCain's campaign quickly noted that Obama opposed dipping into the oil reserve as recently as last month. "The strategic oil reserve exists for America's national security strategy - not Barack Obama's election strategy. The last release of oil from the strategic reserve came in response to Hurricane Katrina, but the only crisis that has developed since Barack Obama last rejected this idea 28 days ago is a slide in his poll numbers," said spokesman Tucker Bounds.

The nation's strategic petroleum reserve contains 707.2 million barrels in salt caverns in Texas and Louisiana. Since Katrina, President Bush has refused to use the reserves, saying they need to be kept for emergencies. However, under congressional pressure, Bush stopped filling the reserve in June until prices decline. Obama's call for using the government reserve mirrors a proposal that pushed by congressional Democrats, but opposed by Republicans and the White House.

Speaking to reporters yesterday in Pennsylvania, McCain also again advocated more oil drilling off the US coast. "Anybody who says that we can achieve energy independence without using and increasing these existing energy resources either doesn't have the experience to understand the challenge that we face or isn't giving the American people some straight talk."

In the Michigan speech, Obama also reiterated his position - first revealed Friday - that he could support limited new offshore drilling if it were done in an environmentally sound way and if were needed to enact a compromise energy policy to foster fuel-efficient autos and alternative energy sources. Such a compromise, which would allow some drilling off Southern states, was proposed Friday by 10 moderate to conservative senators from both parties.

In his speech and a new television ad, Obama criticized McCain's energy policies and suggested that he switched on offshore exploration to curry favor from oil companies.