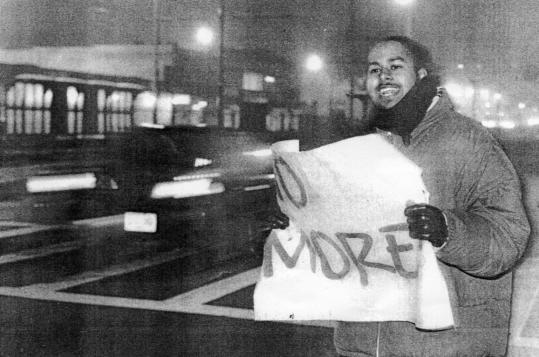 For 41 hours, he stood on the sidewalk.

He was just 17 years old, a freshman at Boston University, and he didn't know what else to do. A jury in New York had just acquitted the four police officers whose 41 bullets had killed an unarmed Guinean immigrant named Amadou Diallo.

So Joshua DuBois wrote "NO MORE" on a placard, planted himself on an expanse of pavement along Commonwealth Avenue, in front of a memorial to Martin Luther King Jr., and stood there - 41 hours for 41 shots.

"I was completely disconnected from social activism, or the world around me - I was almost devoid of a social consciousness before then," DuBois said. "But I was struck by the injustice. So I stood in the middle of Marsh Plaza with a sign and tried to talk to whoever came by."

That vigil - which the politic DuBois now says he thinks of as a listening session and not a protest - marked the beginning of a journey for DuBois that has now taken him, at the age of 25, to the post of religious affairs director for Barack Obama's presidential campaign.

DuBois, who says he found his religious and political voice while a student in Boston, heads what has become the most intensive outreach effort by a Democratic candidate to people of faith in a nation where the most frequent worshipers also tend to be Republican. He oversees a staff of four, as well as six interns, who have organized about 200 town hall meetings about faith and now are launching a series of smaller house parties to discuss values and the campaign.

"I think you're going to see a lot of folks who have never voted for a Democrat before really give Senator Obama a hard look," DuBois said. "We don't expect to outright win the evangelical vote - for some his positions are a nonstarter, and we respect that - but there are a whole bunch of others who may disagree with him on some tough issues, but agree on others and say, 'I'm going to vote for him.' "

Dubois has had a hand in numerous efforts to reach out to the faith community - he pulled together Obama's recent meeting with conservative evangelical leaders, for example. His shop also oversees a faith portion of the Obama website where staff members blog about faith-related developments, and provides resources for a large number of faith-oriented campaign groups such as Utah Catholics for Obama. And, DuBois said, his group also counsels church officials on how to comply with tax regulations limiting their political activities.

DuBois was born in Bar Harbor, Maine, and spent his first few years in Cambridge, but was raised in Nashville, which he considers his hometown, and then in Xenia, Ohio, where he attended high school. His stepfather is an itinerant minister in the African Methodist Episcopal Church. He chose BU, he said, because "I wanted to see the world - to go to a bigger city - and BU stuck out as a cosmopolitan campus in the middle of a downtown area."

During his vigil on the plaza, among those who stopped by to talk was Eugene Schneeberg, a fellow student at BU, who invited DuBois to church. "Initially, I was not interested in reintegrating myself in a Christian community, because I figured I knew it all, growing up in the church," DuBois said. "But what I didn't really know was how to have a personal relationship with Jesus."

DuBois wound up joining Schneeberg's congregation, Calvary Praise & Worship Center, a tiny evangelical congregation in Cambridge affiliated with the United Pentecostal Council of the Assemblies of God, a small, predominantly African-American denomination. DuBois, although just a teenager, started preaching when the pastor was away and was named an associate pastor. He and Schneeberg also led Bible study at a halfway house, and some days they would walk along Massachusetts Avenue, offering pizza and conversation to homeless folks along the way.

He first encountered Obama on television - DuBois was at a restaurant in Washington when he saw Obama's keynote speech to the 2004 Democratic National Convention in Boston - and he was struck in particular by one Obama line, "We worship an awesome God in the Blue States."

"I had been struggling with whether I should go into ministry or politics, and I felt that God was leading me to find a way to do both, but I didn't know any politician that got that intersection right," DuBois said. "That phrase jarred me."

DuBois decided he wanted to work for Obama, then a candidate for the US Senate. He wrote to Obama's campaign manager and got a form rejection. After Obama arrived in Washington, DuBois twice drove to his office but failed to get a job interview. After a third appeal, Obama hired him as a Senate aide. Part of his job was addressing faith issues.

Adam Taylor, the senior political director at Sojourners, an evangelical antipoverty organization, said DuBois became "part of a loose network of progressive-minded Christians" who have been meeting in Washington for the past few years.

Taylor said that although DuBois grew up in the black church, whose adherents have traditionally voted for Democrats, he has proved deft at reaching out to "parts of the electorate that were almost written off by Democrats for decades, particularly white evangelicals and white Catholics."

"He's a young guy, but folks should not be fooled by that," Strider said. "After the Kerry-Bush race, when a handful of us were taking up the cause of expanding the faith conversation in the Democratic Party, Joshua was one of those with us. He has a lot of knowledge and toughness, is really focused on his job, and does it quite well."