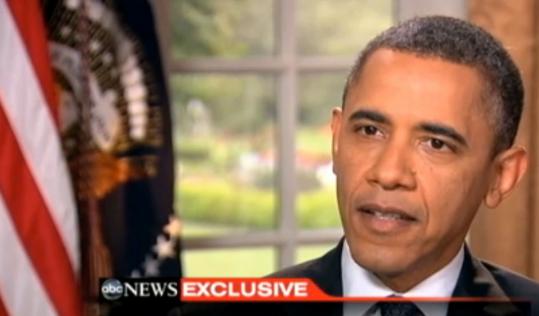 In explaining his previous stance in an interview, President Obama said, “I’ve been going through an evolution on this issue.’’ (ABC News)
By Tracy Jan and Matt Viser Globe Staff / May 10, 2012
Text size – +

WASHINGTON - President Obama became the first president Wednesday to speak out in favor of same-sex marriage, setting up a clear contrast to his Republican rival Mitt Romney on a highly charged issue over which Americans remain deeply divided.

“At a certain point I’ve just concluded that for me personally it is important for me to go ahead and affirm that I think same-sex couples should be able to get married,’’ Obama said during a hastily arranged television interview at the White House with “Good Morning America’’ coanchor Robin Roberts.

Obama’s support for same-sex marriage is a signature moment in an equal-rights campaign that began 12 years ago with civil unions in Vermont and won marriage rights for the first time in Massachusetts nine years ago.

Six states, mostly in the Northeast, have now approved gay marriage. But even as polls show public support building, the issue still divides the country, as was evident in North Carolina’s overwhelming approval Tuesday of a constitutional ban on gay marriage.

Obama said his position on same-sex marriage evolved over several years as he spoke with friends, family, and neighbors about it. He cited the influence of members of his staff “who are in incredibly committed monogamous relationships, same-sex relationships, who are raising kids together,’’ and the gay soldiers, airmen, Marines, and sailors “who are out there fighting on my behalf’’ but not allowed to marry.

ABC interrupted a regularly scheduled soap opera Wednesday afternoon to air an excerpt of the interview. An extended version will air Thursday on “Good Morning America.’’

Obama’s sudden declaration departs from his longstanding public statements supporting equal rights for gay couples that stopped just short of marriage. It came after advocates on both sides of the issue called on the president in recent days to clarify his stance.

It also injects into the presidential race a galvanizing social issue, significantly elevating the topic of gay marriage at a time when the economy is still struggling to gain momentum.

Romney on Wednesday reaffirmed his strong opposition to both gay marriage and civil unions, which puts the two presidential contenders on opposing sides of the issue.

On Monday, Education Secretary Arne Duncan said unequivocally that he believes same-sex couples should have the legal right to marry.

Some Democrats have called on Obama to include support for same-sex marriage in the party’s presidential platform. Gay donors have provided significant funds for the president’s campaigns.

In explaining his previous stance, Obama said, “I’ve been going through an evolution on this issue.’’

“I’ve always been adamant that gays and lesbians should be treated fairly and equally,’’ he said, citing the reversal of the “don’t ask, don’t tell’’ policy that barred openly gay servicemen and women from serving in the military, and his stance that the Defense of Marriage Act, which prohibits federal recognition of same-sex marriages, is unconstitutional.

Obama’s new position could help mobilize public opinion against the Defense of Marriage Act, which is under court challenge. Overturning the law would make same-sex couples eligible for federal benefits available to heterosexual couples.

Obama said he has “stood on the side of broader equality’’ for the lesbian, gay, bisexual, and transgender community, “and I’d hesitated on gay marriage in part because I thought civil unions would be sufficient . . . and I was sensitive to the fact that for a lot of people, the word ‘marriage’ is something that evokes powerful tradition and religious beliefs.’’

Obama’s position on same-sex marriage has vacillated over the years: He endorsed gay marriage during a 1996 run for the Illinois Senate, then opposed it when he ran for US Senate in 2004 and for president in 2008.

He once said on a questionnaire that he supported gay marriage, only to later say he supported civil unions, and then said that his position was “evolving.’’ He has mostly avoided discussing the subject as president.

Staying mum on the issue, especially as key members of his administration were speaking openly about their support of gay marriage, would have made it harder for Obama to attack Romney, the presumptive GOP nominee, for one of his main vulnerabilities - that he’s seen as willing to change his own positions with the political winds.

The timing of the president’s remarks could allow Obama supporters to argue that he is willing to take firm position, even when they differ with the electorate in key states, while they contend that Romney lacks a political core.

Governor Deval Patrick, a strong supporter of same-sex marriage and close friend of Obama’s who is a cochairman of his reelection campaign, said the president’s announcement gives hope to same-sex couples across the country awaiting the right to marry.

Michael Bloomberg, the billionaire mayor of New York and avatar of centrist politics, whose endorsement has been courted by both Romney and Obama, also applauded Obama’s announcement, calling it “a major turning point in the history of American civil rights.’’

“No American president has ever supported a major expansion of civil rights that has not ultimately been adopted by the American people - and I have no doubt that this will be no exception,’’ Bloomberg said.

Some gay-rights activists, however, said Obama should have made his feelings known before the North Carolina vote, with the hopes of swinging the election.

“Log Cabin Republicans appreciate that President Obama has finally come in line with leaders like Vice President Dick Cheney on this issue, but LGBT Americans are right to be angry that this calculated announcement comes too late to be of any use to the people of North Carolina, or any of the other states that have addressed this issue on his watch,’’ Cooper said in a statement.

During his unsuccessful US Senate campaign against Edward M. Kennedy in 1994, Romney said he would fight harder for the equal rights of gays and lesbians than his more liberal opponent.

But when Romney was campaigning for governor in 2002, he made clear that he opposed gay unions.

After the Supreme Judicial Court in Massachusetts ruled in 2003 that barring gay marriage was unconstitutional, Romney sought several legislative ways to stop the state from becoming the first to legalize it. He also supported efforts, ultimately unsuccessful, to amend the state Constitution to ban gay marriage.

Romney has also said he would fight for a federal constitutional ban on gay marriage, and would preserve the Defense of Marriage Act.

During a brief press conference after a campaign appearance in Oklahoma City Wednesday, Romney reiterated his stance on what he called a “very tender and sensitive topic.’’ While each state should have the right to make decisions with regard to domestic partnership benefits such as hospital visitation rights, Romney said, “My view is that marriage itself is a relationship between a man and a woman . . . I have the same view that I’ve had since, well, since running for office.’’

Obama stressed in the extended interview that he continues to support the concept of states deciding the issue on their own.

But he said he’s confident that more Americans will grow comfortable with gays and lesbians getting married, citing his own daughters’ comfort with the concept.

“It’s interesting, some of this is also generational,’’ the president said. “You know when I go to college campuses, sometimes I talk to college Republicans who think that I have terrible policies on the economy, on foreign policy, but are very clear that when it comes to same sex equality or, you know, sexual orientation, that they believe in equality. They are much more comfortable with it.’’

The most recent Gallup poll, published Tuesday, showed 50 percent of Americans believe same-sex couples should have the same marriage rights as heterosexual couples; 48 percent do not.

That is a dramatic shift in public opinion from 1996, when Gallup started this poll, showing 68 percent opposed gay marriage and only 27 percent supported it.

Obama also told Roberts that Michelle Obama was involved in his decision and spoke specifically about their Christian faith, invoking the Golden Rule of treating others the way you would want to be treated.

“In the end the values that I care most deeply about and she cares most deeply about is how we treat other people,’’ Obama said. “We are both practicing Christians and obviously this position may be considered to put us at odds with the views of others.’’

Senator John F. Kerry, who ran for president as an opponent of same-sex marriage in 2004 before formally declaring his support for such unions last year, applauded Obama’s announcement.

But he said: “This is not going to be what this election is about, nor is it going to impact it.’’

Other issues, such as jobs and national security, will be more important, he said, brushing aside worries among some Democrats that Obama’s stance could hurt him in conservative swing states such as North Carolina and Virginia.

Lara M. Brown, a political science professor at Villanova University, said she does not envision Obama’s endorsement of gay marriage having a major impact in November. “In swing states, there are generally equally energized bases on both sides,’’ Brown said.