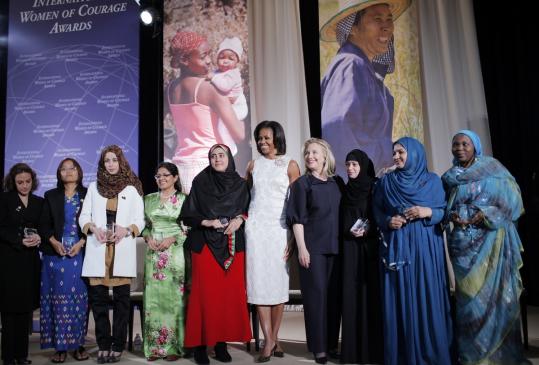 WASHINGTON - It is difficult to imagine now that Michelle Obama was once hesitant to uproot her family to Washington, wary of living out her life in a political fishbowl teeming with piranhas. That tentativeness is long gone as she jets from city to city promoting the president’s record and drumming up money for her husband’s reelection campaign.

Obama touches down in Boston on Friday afternoon for a reception and $5,000- to $25,000-a-head dinner at the Institute of Contemporary Art to benefit the Obama Victory Fund. She will give a speech, mingle, pose for pictures. It will be her fourth campaign event in the past week, squeezed between her official duties. Earlier in the day she will visit Concord, N.H., to promote her national initiative to fight childhood obesity.

From the fist bump to doing the Dougie, Obama has injected cool back into the White House. At once glamorous yet able to easily connect with everyday people, Obama serves as star surrogate for boosting the Democratic base.

She has been the ideological muscle behind the president, pushing him to champion what may be politically unpopular, but in her view worthy, causes like universal health care. It is a role some historians and political observers liken to that of Eleanor Roosevelt, who campaigned for antilynching laws, civil rights, and indoor toilets in public housing.

“She has a view of the world that is all about equity and fairness, and when she sees any violation of those values, she reacts with passion,’’ said Philip Johnston, former chairman of the Massachusetts Democratic Party, who plans to attend Friday’s fund-raiser. “She is a progressive and she feels the government should be there for poor people, for children, for people of color, and for women.’’

Obama, he said, serves as the “eyes and ears’’ for her husband.

Doris Kearns Goodwin, whose book “No Ordinary Time’’ chronicles Franklin and Eleanor Roosevelt’s years in the White House, said it sets up a healthy dynamic for a president to have “someone close to you reminding you of your principles and convictions in the midst of all the crazy politics.’’

But unlike Roosevelt or the more recently controversial Hillary Rodham Clinton, Obama is highly popular because she has managed to promote the issues she cares about in a way that resonates with the average American family, said Robert Watson, a presidential scholar at Lynn University in Boca Raton, Florida.

Her causes - an anti-obesity campaign and addressing the concerns of military families - complement her husband’s presidential agenda of health care reform and ending the wars in Iraq and Afghanistan, Watson said. Obama, a Harvard-educated lawyer and a former vice president at the University of Chicago Medical Center, has been able to wrap her agenda in a “pink glove,’’ all while gamely playing the antiquated but important social role of first lady, he said.

“She has the velvet pulpit rather than the bully pulpit,’’ said Watson, who has written two books on first ladies and has co-authored a forthcoming book on the Obama presidency in which he wrote a chapter on Michelle Obama. “She’s an Ivy League power broker and should be the Secretary of Health and Human Services, but if she were more active, the Rush Limbaughs of the world would cut her off at the knees. She’s managed to find the 50-yard line.’’

Governor Deval Patrick, a close friend of the Obamas and a cochairman of the president’s reelection campaign, said Michelle Obama’s down-to-earth nature “keeps the president grounded, particularly when you see her tease him privately.’’

“He listens very closely when she is speaking, and he watches her expression,’’ Patrick said. “When the group is small, there’s a lot of what she’s thinking written on her face.’’

Charles Ogletree, a Harvard Law professor who has known Obama since her first year of law school in 1985, said, “She always believes in keeping it real. She’s very direct and candid with folks, and embraces them in a way that shows she’s genuine.’’

Obama’s favorability ratings are higher than her husband’s, making her a valuable asset to his campaign. The latest Marist poll from last October had her at 63 percent, whereas Gallup shows Barack Obama averaging 45 percent for the month of February. Her popularity will help boost the president in swing states and among women and independent voters, campaign officials said.

Other than the president himself, Michelle Obama is the first person donors request to headline fund-raising events, said David Axelrod, Barack Obama’s senior strategist who expects her role to increase as the campaign wears on.

“Michelle is a thoroughly disarming person,’’ Axelrod said. “She’s extraordinarily outgoing and warm and accessible. By dint of his job and nature, the president’s a little more reserved. They complement each other well.’’

At a fund-raising event in Kansas City, Mo., on Monday, Michelle Obama charmed a crowd gathered at the American Jazz Museum by taking the time to relate personally to adults and children alike. She answered one 11-year-old girl’s question about what it was like to meet teen pop star Justin Bieber at the White House and complimented a 13-year-old girl’s Betsy Johnson dress, said Andrea Bough, a Kansas City lawyer who brought her daughter to the event.

Obama’s speech artfully wove her personal story - growing up in a “little-bitty’’ apartment on the South Side of Chicago with parents who had not gone to college - with the policies and priorities of her husband’s administration.

While Barack Obama is “often thought of as too intellectual, she seems to connect a little better,’’ Bough said.

The transformation of Michelle Obama’s public image, from a “grotesque caricature of a radical angry black woman’’ to becoming the First Fashionista, to emerging as her own person has been remarkable, Watson said.

While Republicans tried to demonize her in 2008 as an unelected voice, “she hasn’t been the punching bag that she was four years ago despite the no-holds-barred Republican primaries,’’ said Neera Tanden, president of the Center for American Progress and former health reform adviser in the Obama administration.

“I think that’s been a skillful deliberative strategy,’’ Tanden said. “She’s working on important issues but taking them on in a way that’s devoid of politics.’’