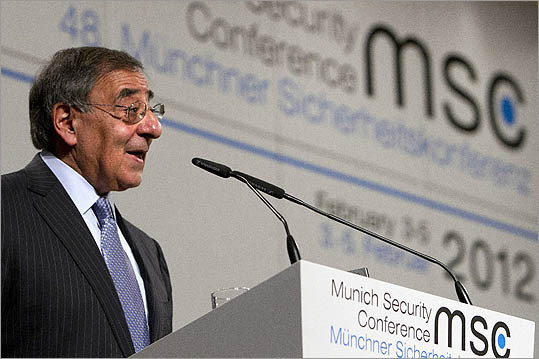 Panetta and Army Gen. Martin Dempsey, the chairman of the Joint Chiefs of Staff, defended the blueprint that would slash the size of the Army and Marine Corps, cut back on shipbuilding and delay the purchase of some fighter jets and weapons systems. Overall, the budget for 2013 would provide $525.4 billion in base spending and another $88.5 billion for the wars in Afghanistan and Iraq.

The total is nearly $32 billion less than this year's budget, a reflection of the drawdown in the two conflicts, a decade since the Sept. 11 terrorist attacks and the clamor to reduce the nation's deficit.

Dempsey acknowledged the inherent risks of a smaller budget, but told the Senate Armed Services Committee, "we're very confident, because we've worked this collaboratively, that we can mitigate risks by adapting lessons from the last 10 years of war, new emerging capabilities."

In the first of three days of congressional testimony for the Pentagon leaders, Panetta said the leadership of the Defense Department -- military and civilian -- was unified behind a revised strategy to shift the focus from the long wars to future challenges in Asia, the Mideast and cyberspace and the proposed budget for the fiscal year beginning Oct. 1.

The show of unity from the political appointee and the senior officer was meant to deflect criticism from some in Congress, especially Republicans, that a Democratic commander in chief was hollowing out the force.

Still, Republicans and Democrats on the panel challenged the administration's call for another round of domestic base closures and raised parochial concerns about the fate of labs, ships and submarines that mean thousands of jobs back home.

Sen. Carl Levin, D-Mich., chairman of the panel, said the Pentagon should look at shutting bases in Europe and overseas before targeting installations in the United States.

The overall spending was dictated by the budget agreement that Obama and congressional Republicans reached last August that calls for defense cuts of $487 billion over a decade. More troubling to Panetta and lawmakers is the likelihood that automatic, across-the-board cuts will kick in in January unless Congress can come up with at least $1.2 trillion in savings.

The Pentagon would face an additional $492 billion in cuts. Panetta called the so-called sequestration a "mindless formula."

"This is why Congress must do everything possible to make sure that we avoid sequestration," he said. "We are more than prepared to work with the Congress to try to develop an approach that will de-trigger sequestration. This approach would subject the department to another $500 billion in additional cuts that would be required to take place in a meat-ax approach."

The proposed budget would cut war spending. Money for Iraq and Afghanistan will drop from $115 billion this year to $88.5 billion, with less than $3 billion spent for security in Iraq. It also cuts in half the amount spent on training and equipping Afghanistan's security forces -- a key element to the U.S. effort to gradually withdraw forces and transfer security responsibility to the Afghans.

While military personnel still would get a 1.7 percent pay raise, retirees would get hit with a series of increases in health care fees, co-pays and deductibles. The impact would be greater on those who are under 65 and are likely to have another job, as well as on those who make more money.

The cuts, Dempsey said, "will not lead to a military in decline. Rather, this budget will maintain our military's decisive edge and help sustain America's global leadership."

During four hours-plus of testimony, Panetta and Dempsey addressed questions about the world's hotspots -- Iran, Egypt, Syria, Iraq and Afghanistan.

--On Syria, Dempsey said the Pentagon does not have a clear picture of the opposition challenging President Bashar Assad. He said the United States is working in the intelligence community to develop a better understanding.

"The Free Syrian Army, which is, generally speaking, the centerpiece of the opposition, is for the most part domestic, although we also know that other regional actors are providing support. That complicates the situation," Dempsey said.

McCain and a few other senators have called for arming the Syrian rebels.

--Panetta said he will not approve the release of any Taliban from the Guantanamo Bay, Cuba, military prison as part of Afghan peace talks unless he's sure they won't return to the battlefield. He said no decisions have been made on such a release.

--Dempsey said he pleaded with Egypt's ruling generals to resolve the crisis with Washington over the crackdown on American nonprofit groups that promote democracy in the Middle East, warning that the simmering dispute threatens billions in U.S. aid and the relationship between the two nations. He stopped short of saying whether his appeals during a recent trip to Egypt swayed the generals to drop charges against pro-democracy workers.

--Panetta said he does not think Israel has made a decision to launch a military strike on Iran to thwart its nuclear ambitions.

More articles in Washington
Your comment is subject to the rules of our Posting Policy
This comment may appear on your public profile. Public Profile FAQ