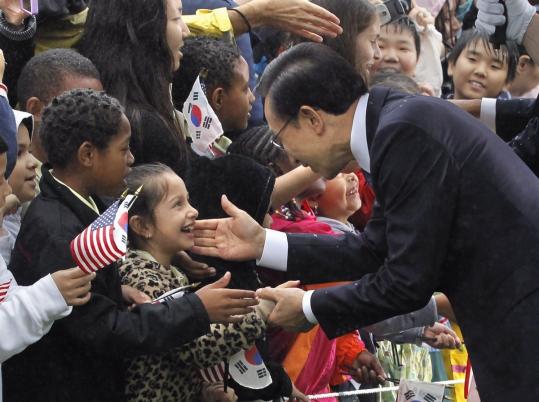 WASHINGTON - President Obama vowed yesterday to push for the “toughest sanctions’’ to punish Iranian officials whom he accused of complicity in an alleged plot to kill the Saudi ambassador to the United States.

At the same time, State Department officials said US officials had been in direct contact with the government of Iran over the accusations.

In his first public remarks on the issue since it was revealed Tuesday, Obama sought to counter skepticism about whether Iran’s Islamic government directed an Iranian-American car salesman to hired a Mexican drug cartel to assassinate the Saudi ambassador and carry out other attacks. Obama said US officials “know that he had direct links, was paid by, and directed by individuals in the Iranian government.’’

“Now those facts are there for all to see,’’ Obama said. “We would not be bringing forward a case unless we knew exactly how to support all the allegations that are contained in the indictment.’’

The president said the administration had reached out to its allies and the international community to make its case. “We’ve laid the facts before them,’’ Obama said at a news conference conducted with the visiting South Korean president, Lee Myung Bak. “And we believe that after people have analyzed them, there will not be a dispute that this is in fact what happened.’’

Obama’s comments came as Iran escalated its rebuttal of the US charges, saying the claims were so ludicrous that even politicians and press in the United States were expressing skepticism about such a scheme.

Iran’s state-run media was dominated yesterday by rejections of the US charges. Press TV, an English-language news website controlled by the Iranian government, quoted the foreign minister, Ali Akbar Salehi, calling the charges part of a new propaganda campaign. The official Islamic Republic News Agency quoted Ali Ahani, the deputy foreign minister, as saying that “the absurd and conspiratorial scenario was made so immaturely that even political circles and media of the US and its allies were suspicious about it.’’

Appearing next to the South Korean president, who was in Washington for a state visit, Obama promised to “apply the toughest sanctions and continue to mobilize the international community to make sure that Iran is further and further isolated and pays a price for this kind of behavior.’’

Obama said that all options are on the table - a diplomatic signal that he would not rule out military strikes - but administration officials privately say it is highly unlikely that the United States would respond militarily.

Instead, the administration will try to persuade Russia, China, Europe, and India to endorse tougher sanctions against Tehran, a strategy which has had limited success, as Russia and China in particular have been wary about going too far in a direction that officials say could hurt commercial interests in those countries.

The State Department spokeswoman, Victoria Nuland, said yesterday that the administration had directly raised the accusation with the Iranians, though she did not provide details.

“We are not prepared at the moment to go any further on the question of who spoke to whom and where but just to confirm that we have had direct contact with Iran,’’ she said.

The United States has not had diplomatic relations with Iran since 1980, following the Islamic Revolution that overthrew the shah and the ensuing takeover of the US embassy in Tehran.

“When you look at these details, it seems like something out of a movie,’’ Nuland acknowledged in her remarks about the suspected plot. “But as you begin to give more detail on what we knew and when we knew it and how we knew it, it has credibility. And that credibility is coming through in the briefings. And frankly, Iran is a country with quite a long track record of not only terrorist activity, but bizarre efforts.’’

Standing next to Obama in the White House East Room yesterday, Lee gave him a measured vote of confidence on the suspected plot.

“We were deeply shocked when we read the reports on the attempt to harm the Saudi envoy here in Washington, D.C.,’’ Lee said. “I and the Korean people strongly condemn all forms of terrorism.’’