Portrays Perry as too extreme 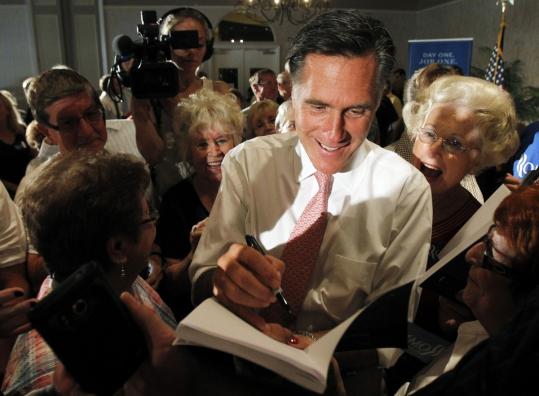 Mitt Romney and Governor Rick Perry of Texas have battled over Social Security on the campaign trail but Romney and his supporters have subtly shifted emphasis, arguing that Perry would fare worse against President Obama in the general election. (Charles Dharapak/Associated Press)
By Matt Viser Globe Staff / September 16, 2011

WASHINGTON - Mitt Romney and his supporters, who for months maintained that his business experience makes him the best presidential candidate in a stagnant economy, have subtly shifted emphasis to a different argument: that he would be a far better general election candidate than Rick Perry, the brash-talking Texas governor.

In a bid to stymie Perry, who quickly overtook Romney as the Republican front-runner in national polls, the former Massachusetts governor is trying to cast his rival as too far out of the mainstream to defeat President Obama.

“Governor Perry in his book says Social Security has been forced on us and by no measure is Social Security anything but a failure,’’ Romney said last week on conservative commentator Sean Hannity’s radio show. “If we nominate someone who the Democrats can correctly characterize as being opposed to Social Security, we will be obliterated as a party.’’

Romney, who has failed to stir the passions of primary voters en masse, hopes he can win them over by casting himself as the pragmatic politician best able to attract independents and disaffected Democrats in key swing states like Ohio and Pennsylvania.

It marks a significant test for some Republican primary voters: Should they vote with their heart - choosing the candidate who most represents their political persuasions - or with their heads, picking the one who seems to have the best chance at defeating Obama.

The party also felt that tug during the midterm elections, when the Senate majority appeared in its grasp but GOP voters instead nominated several candidates who proved unable to attract wider support and ended up losing to vulnerable Democrats.

“Usually [electability] is not the most effective appeal in primaries where activists are the main voices,’’ said Julian Zelizer, a professor of history at Princeton University. “In this election though, the anger toward President Obama is so intense for the Republican Party that the electability argument might be stronger than it usually is.’’

Perry has been trying to counter skepticism about his general election appeal, in part with several prominent endorsements, from Louisiana’s governor, Bobby Jindal, and Nevada’s governor, Brian Sandoval. His campaign dismissed the notion that he was unelectable, particularly since it was being put forward by Romney, who lost a Senate race in 1994 and a presidential bid in 2008.

“Governor Perry has run numerous races, and people who have had that line on us before are now home watching reruns on TV of ‘CSI: Miami,’ ’’ said Mark Miner, a spokesman for Perry’s campaign. “This electability issue comes from someone who has been running for president for five years. If someone has an electability problem, it’s Mitt Romney. He’s made a career out of it, and not a very successful one.’’

So far, it is the battle over Social Security that has become a proxy for who is the most electable in the race. Perry has pilloried the popular retirement program, referring to it as a “Ponzi scheme’’ and “a monstrous lie to our kids.’’ Romney also says the program needs to be changed, but has tempered his tone, pledged to keep the program in place, and said Perry’s rhetoric is dangerously out of the mainstream.

“Rick Perry has radical views on Social Security,’’ said Eric Fehrnstrom, a senior adviser to Romney. “No candidate in modern times from either political party has won office by attacking Social Security as an unconstitutional program. Republicans sense a real opportunity to win in 2012 but we shouldn’t throw away our chances by nominating for president a person who questions why the federal government even provides old age pensions.’’

Romney advisers also point to Perry’s brash behavior, and comments such as his calling the actions of Federal Reserve chairman Ben Bernanke potentially “treasonous.’’ They compare Perry to such former Senate candidates as Christine O’Donnell in Delaware and Sharron Angle of Nevada, who excited Republicans and won their primaries but then lost general elections to Democratic opponents.

Romney supporters are also trying to make the case that if Perry is at the top of their ticket in 2012, not only would they struggle to win the presidency but every GOP candidate running would be dragged down because they would be forced to answer to criticism about Perry’s stance on Social Security.

“If we give the gift of Social Security to the Democrats, it will be the gift that keeps on giving,’’ said Representative Jason Chaffetz, a Utah Republican who has been backed by the Tea Party and supports Romney. “You’ve got to be able to attract the center to ultimately win. Who’s going to play better in Florida, Mitt Romney or Governor Perry? Who’s going to play better in populations with high numbers of seniors?’’

Recent polls seem to illustrate a dichotomy between the Republican primary electorate and the wider general electorate that shows the challenge ahead for Romney.

In a CNN poll released Monday that showed Perry ahead in the primary contest, 42 percent of Republican primary voters also thought Perry had the best chance at beating President Obama, compared with 26 percent for Romney.

But polls that also survey independents and Democrats have routinely showed Romney faring better in a head-to-head matchup with Obama.

A new Bloomberg poll, conducted Sept. 9-12, found that Republicans generally agreed with Perry’s controversial statements, but his numbers dropped with the broader electorate skeptical of his views on Social Security, evolution, and climate change. In a general election matchup, Perry trailed Obama by 9 percentage points, while Romney trailed by 5 points.

The electability argument seems to be catching hold, even among those in the party who have not always been fond of Romney. Karl Rove recently said Perry’s stance on Social Security would be “toxic in a general election environment.’’

“Mitt may be the most electable Republican,’’ Mike Huckabee, a former Arkansas governor who sparred with Romney for the 2008 nomination, said this week on Laura Ingraham’s radio show. “I want us to win. Of course I’d love to win with someone who thinks like I think, believes like I believe, 100 percent. That’s not going to happen. So I’ve got to figure out where our best shot is.’’

The case for electability has played out in many primaries in the past, with varying degrees of success. When Howard Dean surged during the 2004 Democratic primary, Senator John Kerry’s supporters urged voters to think twice about picking a fiery anti-war candidate to go up against President George W. Bush. Jimmy Carter suggested to his fellow Democrats that Senator Edward M. Kennedy of Massachusetts was too liberal to win in 1980.

Some of Romney’s advisers say they aren’t likely, at least right now, to make electability the crux of their campaign.

“Running as the most electable is fool’s gold,’’ said Ron Kaufman, a top Romney adviser. “I’ve watched people say, ‘Vote for me because I can get elected.’ But they lose a poll, and suddenly they’re toast.’’ But in the next breath, Kaufman points out the flaws that Perry may have in a general election.